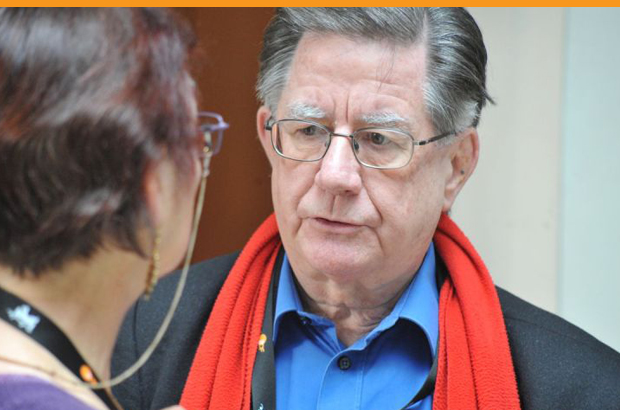 Hans Hodel, ambassador for the role of film in society and for advancing human values and human rights. Photo courtesy of Film Festival Cottbus

Hans Hodel has been a tireless ambassador for increased understanding of the role of film in society and for advancing human values and human rights.

Hans Hodel (Switzerland) dedicated his life to the work of the churches, to ecumenism, to teaching, and above all to cinema. After studying pedagogics and protestant theology in Bern, Switzerland, he served as a parish pastor, especially committed to the youth movement.

He was a professor in a teacher training school for religion, ethics and media in Bern, and from 1987 to 2003 film commissioner of the Swiss Protestant Churches, which included responsibility for non-theatrical film- and video- distribution. As Jury coordinator of INTERFILM from 1989 and its President 2004–13, he oversaw an ecumenical presence at many film festivals including the “big four”: Berlin, Cannes, Locarno, and Montreal.

INTERFILM is the international network for dialogue between church and film. It promotes appreciation of cinema’s artistic, spiritual and social significance and calls attention to the relevance of theology and religion for cinema. Founded in 1955 by delegates of Protestant film associations in Europe, today INTERFILM also embraces Orthodox, Jewish and Muslim members, individuals as well as institutions.

One of Interfilm’s main tasks is to be present at international film festivals with its own juries. For their awards the juries select films that stand out due to their artistic quality and which sensitize viewers to spiritual and social questions and human values. Most recently INTERFILM has established juries in Yerevan (2007), Warsaw (2010), and Miskolc (2011) and at the Mostra Internazionale d’Arte Cinematografica in Venice (since 2011).

For many years Hans Hodel was a member of the Steering Committee of WACC Europe. WACC President Dennis Smith noted that “WACC appreciates the outstanding commitment and dedication that Hans has shown to Christian communication and warmly congratulates him on becoming an Honorary Life Member.”