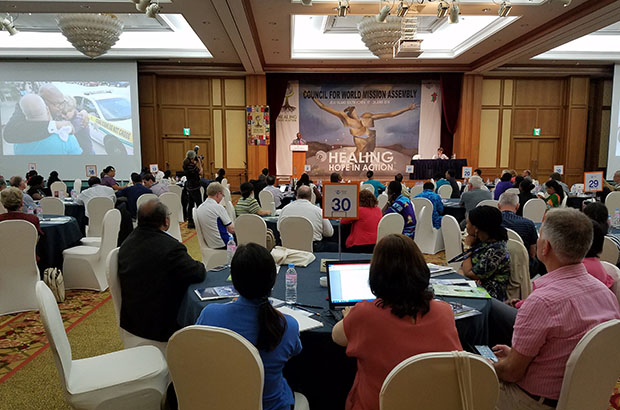 The Assembly of the Council for World Mission is taking place in South Korea. Photo: Ramon Bultron.

The agreement, signed in January 2015, affirms “a shared understanding of communication that challenges injustice and stimulates critical awareness of empire and the realities that the media construct,” said Bultron, a WACC Director and president of WACC Asia. He spoke on June 20, the formal opening day of the assembly.

The assembly’s theme is “Healing: Hope in Action.” It is described by CWM as “a yearning of the heart for the God of healing grace to stir the hearts of all God’s people to actions of hope that will result in the healing of God’s creation.  Such actions include truth-telling, caring confrontation, repentance and forgiveness, all aimed at the experience of community in which life is affirmed as God’s endowment and to which God remains perpetually committed.” 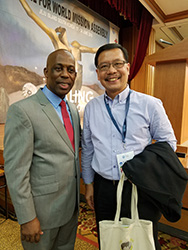 Bultron said the theme “echoes WACC’s own vision of ‘Communication for All.’ WACC believes that communication rights enable all people everywhere to express themselves individually and collectively by all means of communication. They are vital to full participation in society and are, therefore, universal human rights belonging to every man, woman, and child.”

Rev Dr Collin I. Cowan, General Secretary of the Council for World Mission is pictured here (left) with Ramon Bultron (right), WACC Director and Managing Director of the Asia Pacific Mission for Migrants.

WACC’s partnership with CWM is meant to work both within and beyond traditional church-related structures and in solidarity with Christian communicators, social movements, and rights-based groups, Bultron added.

At the assembly, member churches gather for worship, fellowship and the sharing and celebration of God’s work in their different ministries. The assembly also elects CWM’s governing body – the Council. The Council has oversight of all the affairs of the organization and is accountable for all legal and fiduciary concerns associated with CWM work.