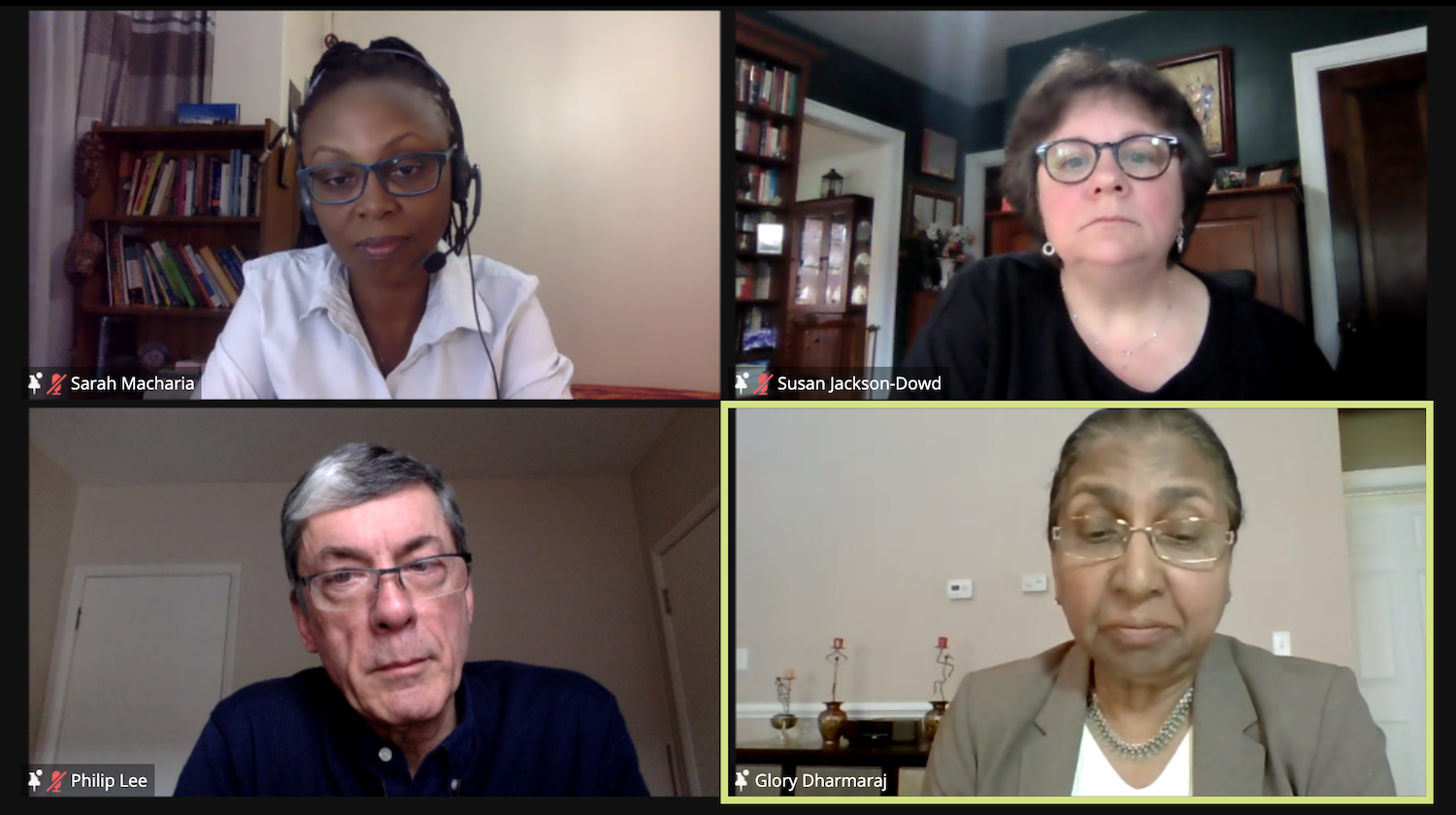 WACC leaders on April 8 urged the 2021  Religion Communicators Convention (RCC) to pick up the findings of the 2020 Global Media Monitoring Project (GMMP) and assess their own communication channels to determine whether they are contributing to the continued invisibility of women and gender stereotyping in the news.

“I think it’s very easy for us to criticize secular media and major media houses. It’s always incumbent on us, I think, to look inwards as well and ask the questions, ‘Are we doing the same? Can we do better? Where are the problems in our own communication output?’” said WACC General Secretary Philip Lee, who was a panelist in a session about the GMMP, which took place on the Whova platform. The session was part of “Opening New Portals, Building Community,” the joint online convention of the Associated Church Press, the Religion Communicators Council and the  Canadian Christian Communicators Association.

Glory Dharmaraj, President of WACC-North America and US GMMP co-ordinator, noted the important role faith communicators can play in promoting gender equality in and through the media. “Human flourishing is at the heart of the religions; protecting and promoting human dignity and flourishing are the core of our belief systems,” said Dharmaraj, another panelist in the session. “Our histories also show that systems of power and privilege often marginalize women and minorities.”

Lee also noted that people of faith often talk about justice, especially in the context of poverty. But, he added, “gender justice is also another major issues, not just in our times, but is long-standing given patriarchy in society.” It’s important for faith communities “to figure out how they can contribute positively to greater change,” he said. 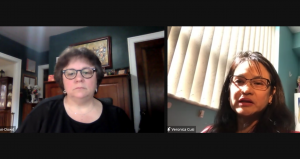 Dharmaraj and Veronica Cusi-Silva, GMMP Co-ordinator for Canada, also shared the preliminary GMMP 2020 findings for the US and Canada.

Sarah Macharia, GMMP Global Co-ordinator, discussed the preliminary findings of the GMMP released in March and noted how the past five years have seen “small, incremental changes towards parity in subjects and sources, particularly in broadcast news.”

Preliminary results show that between 2015 to 2020, television traded places with newspapers “as the medium in which women appear most in terms of legacy media,” she said. “Other statistics tell us that TV viewership numbers shot up to unprecedented levels during COVID that in 2020, and likely because there was a frantic search for any and all information about the pandemic.” 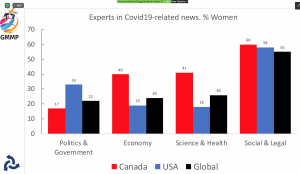 Chart shows preliminary results of the 2020 Global Media Monitoring Project, which shows the percentage of women as experts featured in Covid-related news.

Macharia and Dharmaraj also noted that for the first time, the GMMP has made a provision to include three special questions identified by participating countries. In the case of Canada and the U.S. the questions are related to race, sexual identity, disability and migrant/immigrant status.

In response to a question about what impact the GMMP has made since its inception in 1995, Macharia said it has made an important mark at various international, national and media house policy levels. The GMMP “crystallizes discrimination against women in the news media into hard statistics,” that are taken into account at Commission on the Status of Women sessions, she said. At the national level, GMMP findings have influenced communication policies, as well as policies specific to gender equality and to the prevention of violence against women. GMMP findings have also been used by media houses to enhance internal policies and reporting guidelines. It has also been used for media literacy and gender awareness.

“Groups across the world have been able to use the GMMP results to launch dialogue,” said Macharia. “And this is constructive dialogue, productive dialogue with media practitioners and policymakers. The data has proven invaluable in opening up conversations about accepted routines and practices in media production that results in specific patterns of gender imbalance.”