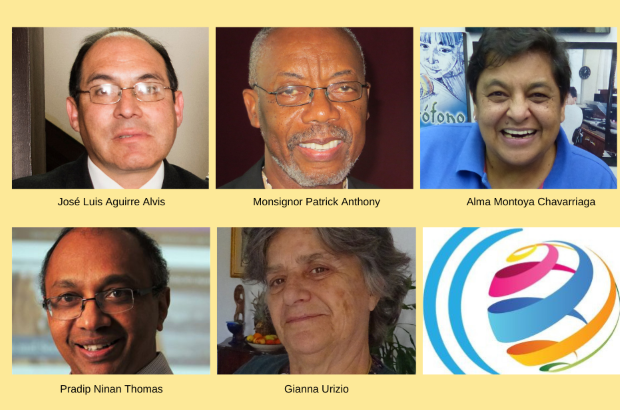 A journalist, a cultural activist, a social communicator, a former WACC director of research, and a social justice activist have been named 2019 Honorary Life Members by WACC’s Board of Directors.

Since 1995, WACC has celebrated individuals from around the world who have upheld WACC’s vision, principles and mission of promoting communication rights in order to promote social justice.

“WACC is delighted to welcome five more individuals to its ranks of honorary members,” said WACC General Secretary Philip Lee. “These are people who live out one of the basic principles of communication rights: unconditional respect for another’s human dignity without prejudice or bias.”

José Luis Aguirre Alvis is a Bolivian journalist and communications researcher who served as former president of WACC Latin America and former vice-president of WACC Global. He is a lecturer in Communication and Development Theory at the Catholic University of Bolivia and director of the Radio and Television for Development Training Service (SECRAD).

Monsignor Patrick A.B. Anthony is a theologian, cultural activist and communications specialist who founded the Folk Research Centre in St. Lucia. A retired director of the Cardinal Kelvin Felix Archdiocesan Pastoral Centre,  St. Lucia, he was a founding member of the Catholic Conference on Theology in the Caribbean Today, and editor of its publication. Anthony was the first president of WACC-Caribe and a director on the Central Committee of WACC Global.

Alma D. Montoya Chavarriaga is a social communicator who has over 45 years’ experience in rural, academic and development communication projects in Colombia and other countries in Latin America. An active WACC member since the 1990s, she is director of Grupo COMUNICARTE, a civil society organization which uses communication to promote equitable and democratic social development.
Pradip Ninan Thomas was formerly Asia regional coordinator and director of research for WACC Global (1990-2004). His research on media in India, the political economy of communications, and communication and social change, among other things, have been published in the Journal of Communication, the European Journal of Communication and with Oxford University Press. Now based in Australia, he is at the School of Communication & Arts in the University of Queensland.

Gianna Urizio is a social justice activist who has worked extensively in film and television, primarily with the Protestant program of Italian Television RAI2.  As program director, she made documentaries that explored faith and culture. She later became active in international ecumenical circles, including the World Council of Churches’ development education programme and then in WACC, where she became WACC Europe president (2003-2005). She became one of the founders of the Protestant Association of Cinema, which promoted with INTERFILM a jury at the Venice Film Festival.