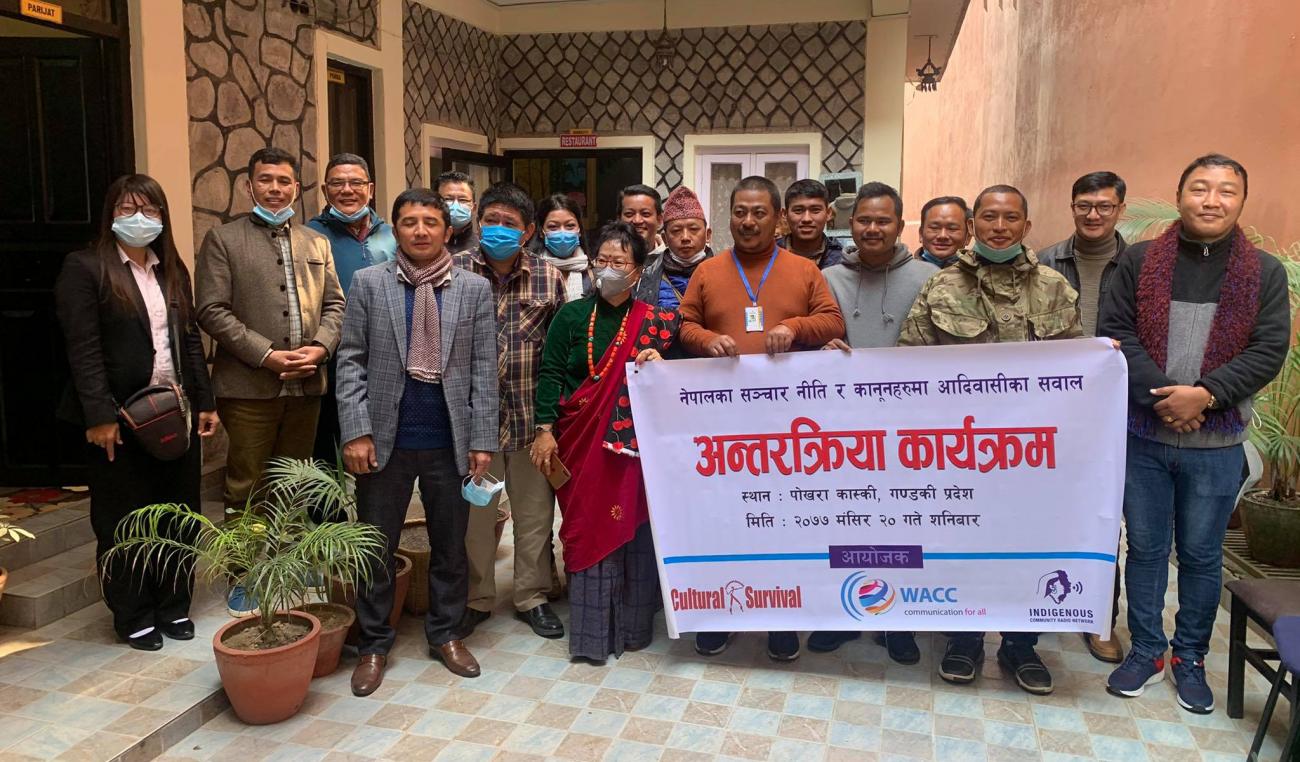 The Indigenous Community Radio Network (ICRN), an umbrella organization of 21 Indigenous radio stations in Nepal, and other Nepali media organizations have successfully lobbied their national and provincial governments to introduce new mass communication, media, information and technology bills that are “more inclusive of the rights of Indigenous peoples.”

ICRN said this came about as a result of a one-year project supported by WACC Global and Cultural Survival to strengthen community radio policy and voice through advocacy and programs.

Nepali officials were about to table the new media bills, but as a result of advocacy efforts by ICRN and other media groups, it decided to review them following the groups’ submission of a 17-point position paper.  The paper includes demands for the rights of Indigenous Peoples to access information and communication in their mother tongue, calls for special measures to ensure that State-owned and privately-owned media reflects Indigenous Peoples’ cultural and linguistic diversity, and other communication-related measures reflected in the UN Declaration on the Rights of Indigenous Peoples.

Nepal, which has been transitioning towards a federal system of government, is  currently “processing a series of legal and policy changes related to media and communications, some of which have an impact on the community media sector,” said Lorenzo Vargas, WACC’s Communication for Social Change manager.  “In this context, there is an opportunity for Indigenous people to engage in awareness raising and advocacy in order to help create a more enabling environment for community media, media democracy, and Indigenous languages.

The need to democratize Nepal’s media system is crucial because it is related to the struggle for Indigenous rights in Nepal, “especially at a time when state and private interests are encroaching upon forests and rivers on Indigenous territory without respecting the principle of Free, Prior, and Informed Consent,” said Vargas.

The project, which began in February 2020, also included other initiatives such as training 30 Indigenous grassroots reporters (50% women) on issues around media reform, sustainable development and Indigenous rights. Participants later produced content on the topics in more than 30 languages, which were broadcast across Nepal.

They also helped develop and disseminate the position paper submitted to lawmakers. Advocacy efforts included dozens of meetings with government authorities at all levels, including the Ministry of Information and Communication and parliamentarians, as well with other civil society organizations such as AMARC-Asia Pacific, the Association of Community Radio Broadcasters (ACORAB), the Federation of Nepalese Journalists, and the Federation of Nepalese Indigenous Journalists.

ICRN also partnered with Indigenous Television, another WACC partner, to produce and disseminate public service announcements in 30 Indigenous languages to help prevent the spread of Covid 19.