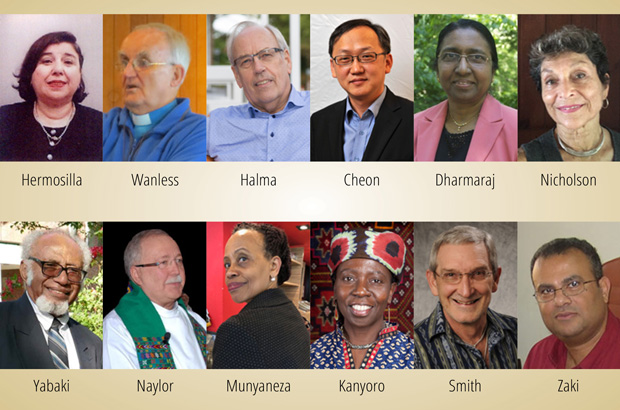 WACC’s Board of Directors is celebrating a dozen individuals whose lives are dedicated to advancing communication rights.

Since 1995, WACC has publicly recognised the work of communicators who have upheld its principles and values while working for greater social justice.

WACC’s 50th anniversary was an occasion to recognize a further six women and six men who have significantly contributed to WACC’s life and work.

Each new Honorary Life Member has a lengthy career of which the following three lines are an inadequate summary. More complete biographical information can be found on WACC’s web site here.

Maria Elena Hermosilla is a Chilean journalist and communications researcher whose speciality is the study of television reception. In recent years, she has worked on public communication policies with a particular focus on gender.

David Wanless is an ordained minister of the United Congregational Church of Southern Africa. During the apartheid years, her was closely involved in the struggle for justice with the South African Council of Churches, eventually working as its Director of Communication.

Piet Halma has broad experience in communications, public broadcasting and peace-keeping. He served at the ecumenical broadcaster IKON in the Netherlands and as advisor to the Board and Management of PAX, an NGO working for peace.

Cheon, Young-cheol is an ordained pastor of the Presbyterian Church of Korea, visiting Professor of Christian Communication at the Presbyterian University & Theological Seminary in Seoul, and General Secretary of Korean Diakonia.

Glory Dharmaraj is US Coordinator for the Global Media Monitoring Project (GMMP) for the USA and a former Administrator of the Seminar Program on National & International Affairs at the Church Center for the UN in New York.

Hilary Nicholson has over thirty-five years of experience in the Jamaican and Caribbean movement for gender equality and human rights, working in advocacy, training, communications and participatory research.

Reverend Akuila Yabaki was at the helm of Fiji’s Citizens’ Constitutional Forum for 16 years, first as Director and then CEO. He is known for promoting the rule of law, good governance, and human rights, especially those of marginalized people. 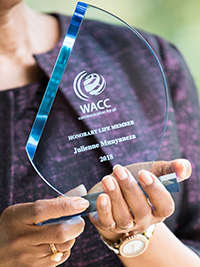 Julienne Munyaneza was a member of WACC’s programme staff for 16 years before working for the Government of Rwanda as the Permanent Secretary of the Ministry of Gender and Family Promotion and then as a consultant for UNAIDS based in Geneva.

Musimbi Kanyoro is currently President and CEO of Global Fund for Women, one of the world’s leading publicly-supported foundations for gender equality. In 2015, Forbes magazine named her one of 10 women “power brands”.

Dennis A. Smith has served for the last 41 years as a mission co-worker of the Presbyterian Church (USA) in Latin America. Since 2011, he has been based in Buenos Aires, Argentina, as its Regional Liaison for South America.

The criteria for Honorary Life Membership are: