WACC steps up effort to respond to communication needs of Venezuelan migrants in Colombia
23528
post-template-default,single,single-post,postid-23528,single-format-standard,theme-bridge,bridge-core-3.0.1,woocommerce-no-js,qodef-qi--no-touch,qi-addons-for-elementor-1.5.6,qode-page-transition-enabled,ajax_fade,page_not_loaded,,qode-title-hidden,columns-4,qode-child-theme-ver-1.0.0,qode-theme-ver-29.2,qode-theme-bridge,qode_header_in_grid,qode-wpml-enabled,wpb-js-composer js-comp-ver-6.10.0,vc_responsive,elementor-default,elementor-kit-41156 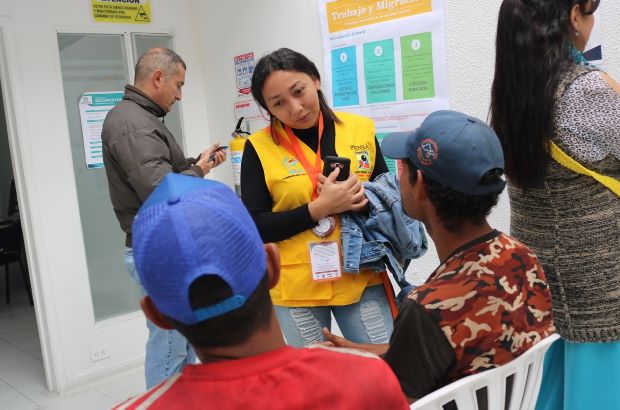 A project to establish “communication that brings us together” began with a mix of “great enthusiasm and uncertainty” over a year ago in Colombia, as the country grappled with the influx of an unprecedented number of Venezuelan migrants.

Today, that project, “Among Neighbours: Network of Colombian and Venezuelan Citizen Journalists – implemented by WACC members Grupo Comunicarte and Fundacion Comunicacion Positiva – is thriving with continued support from WACC Global and the Evangelical Lutheran Church in America (ELCA).

By creating a network of 22 citizen journalists from 22 community and campus radio stations in Colombia and Venezuela the project has been able to provide migrants and host communities access to relevant information. It has also been helping to address negative stereotypes about migrants that contribute to a culture of distrust, xenophobia and discrimination.

The concept for the project began as 770,000 Venezuelans who were escaping their country’s economic and political turmoil began arriving in Colombia between September 2018 to 2019. About 1.6 million Venezuelan migrants now live in Colombia, comprising about 3.4% of the total population. An additional 2.5 million are expected to emigrate, many of them headed to Colombia, which has an open migration policy so far. It is a movement that has been described by the International Office of Migration as “the largest displacement in Latin America’s history.”

The network of citizen journalists has focused on stories about the needs of migrants and refugees, including housing, health, employment, and legal advice, among other things. They have also included stories that lift up Venezuelans, by educating listeners about their culture and values as a people, and stories that address issues around xenophobia and racism.

The project established a cohesive identity online through a website, an internal website for project participants and allies , and social media channels.

The project has been extremely well received by other CSOs and media activists in Colombia: Approximately 150 organizations across the country, including the Jesuit Refugee Service and UNHCR, received and shared information about the project within their networks; 90% of those consulted expressed a positive opinion of the project.

The network has actively contributed to the development of a migration narrative based on human rights and intercultural dialogue through hundreds of media productions that have reached hundreds of thousands of people in both countries. The network has also gained recognition among human rights and cooperation organizations such as the Jesuit Refugee Service, UNHCR, and UNICEF, as well as several universities.

In 2020, thanks to ELCA’s ongoing support, WACC will step up its efforts in Colombia by:

An estimated 880 media products will be produced in 2020 and will be disseminated through community and university radio stations, as well as through digital social networks and public events at the community level.

According to WACC’s estimates, the network of reporters will have a potential audience, without taking into account the digital channels, of six million people in Bogotá and three million people in the border areas. In addition, the project expects to reach another 4 million people in Venezuela, thanks to an alliance WACC has established with a Jesuit broadcasting network in that country. — by Marites Sison

Photo above: A member of the network of citizen journalists at a migrants’ reception centre in  Bogota. By Grupo Comunicarte