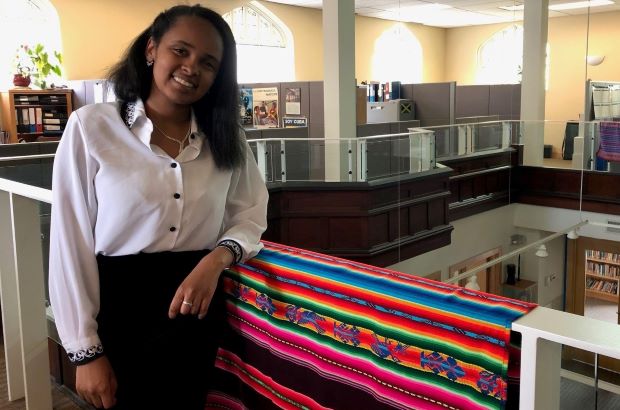 Olivia Michael – an incoming third year student this fall at the University of Toronto, where she is pursuing a double major in health studies and sociology –  has joined WACC for a two-month internship.

Michael said the fact that WACC has partnered with the Canadian International Development Agency (CIDA) was important to her, since she hopes to work for that organization in the future. She plans to work on a health policy that will address health disparities involving marginalized groups, such as women, and to examine the role that media can play in making that happen, she said.

Michael, who has a minor in communications, said she is confident that her WACC internship will help her better understand how communications, in particular media, “can be applied in the real world and what kind of career options might be open for me.”

More than a week into her internship, Michael said she has learned that “media bias is more pronounced than I realized, and it is oftentimes hard to tackle,” requiring “consistent efforts and initiatives” from government and media outlets.

WACC General Secretary Philip Lee welcomed Michael’s internship, saying WACC is “delighted to be able to work alongside young students who bring a fresh perspective to our work and who also benefit from learning about our wide-ranging activities and partnerships.”

Under the supervision of Sarah Macharia, coordinator of the Global Media Monitoring Project (GMMP), Michael has been assigned tasks related to the sixth GMMP, scheduled for 2020. These include assisting in research to revise the media monitoring methodology and tools, writing updates for the GMMP website, updating online tutorials for training and self-directed learning of the media monitoring methodology, and helping conduct a literature review.

Michael said her skills are well-suited for WACC’s work. Having previously worked as research assistant for one of her professors has improved her research skills and taught her how to summarize academic writings in layperson’s terms, she said. She also worked as copy editor for her university’s sociology journal.