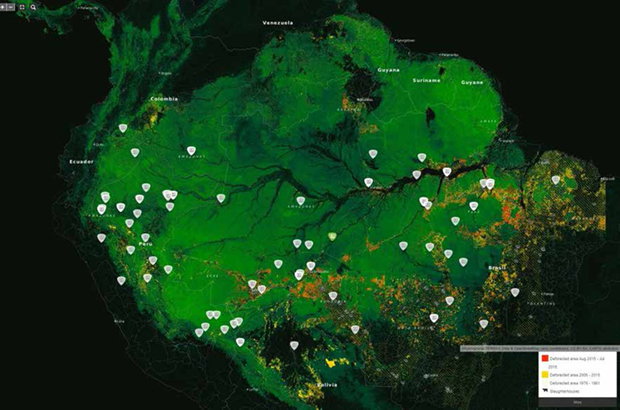 To communicate stories across space and time, the best way to show an audience what’s happening may be to represent it graphically — with satellite imagery, GIS and clear visualizations. For example, interactive maps at InfoAmazonia allow readers to pivot from an overview of Amazon deforestation to individual new stories covering local impacts. Map of deforestation in the Amazon with pins marking geo-tagged news coverage. Credits: InfoAmazonia, TERRA-I, Data © OpenStreetMap and contributors, CC-BY-SA, CARTO.

After several decades under a shroud of neglect, Latin American “public service journalism” is experiencing a much-needed resurgence. It can’t be found however, in the clickbait legacy commercial media. Instead, it can be found in the new breed of digitally native Latin American non-profit journalism. These organisations are profoundly changing the news ecology of the region.

If making a contribution to the fragile Latin American democracies can be considered a “public service” to the region, these new journalistic expressions are indispensable. Defined as journalism that weighs in and fosters a well-informed conversation over public issues concerning citizens, these (relatively) new expressions of Latin America public service journalism are concerned with the shameless and most severe problems the region faces. And there are many: corruption, abuses of power, poverty, crime, impunity and the precipitous destruction of the natural environment.

SembraMedia, a non-profit organization dedicated to supporting new journalistic voices in Latin America, has identified at least 800 new journalistic projects in the region. And this is only in the last five years. Some of them suddenly appear and then disappear. While others consolidate and grow in all senses: financially, structurally and more importantly in their social and political impact – making the powerful very nervous indeed.

Guatemala’s “Plaza Pública” (Public Square) is one of them. “The name comes from Habermas, who believed that the media in a democracy have to operate as public spheres where people can discuss, argue and supervise one another and the powers that be,” said Martín Rodríguez Pellecer, founder and director, to Daniel Perera from the Knight Center for Journalism in the Americas (2011). Driven by a public service news agenda, it is one of the leading journalistic projects of the region. Partially funded by the Jesuit Rafael Landívar University, Plaza Pública was created in 2011 as “a platform for dialogue and debate”.

The same agenda is driving the work of similar journalistic experiences mushrooming across Latin America. In Nicaragua, a country with a population of just six million and with a seriously undermined democracy, “El Faro” and “Confidencial” have become instruments of government accountability and citizens’ empowerment. In 2013, “El Faro” received the Latin American Investigative Award for a story into secret negotiations between the government and the Maras, the criminal gangs largely responsible for an epidemic of street violence plaguing Central America.

In Mexico, “Animal Político” and “Arena Pública” are nowadays two of the most trusted journalism platforms. In a country defined by violence, corruption and impunity, these two journalistic projects are building a “political awareness” news agenda. “Arena Pública” is – as its website says – “a digital platform open to citizen participation to inform, criticize and discuss the facts, without restrictions.” To better understand matters of public interest is at the heart of the public service news agenda of Cuba’s “Catorce y Medio” and Venezuela’s “Efecto Cocuyo”. They have become, in the context of severe government censorship, a breath of freedom for the readers of both countries.

If we consider investigative journalism – as Hugo de Burgh does (2008) – the zenith of “public service journalism”, these new media expressions stand out. Experiences such as “CIPER” in Chile, “Ojo Público” in Peru; Brazil’s “Agência Pública” and “Nexo”; and “La Silla Vacía” in Colombia are exposing major cases of malpractice: be they political, economic, social or environmental. In 2009, “La Silla Vacía” published documents related to the so-called “false positives scandal”. During Colombia’s civil war, the investigation exposed one of the worst episodes of mass atrocity in the hemisphere – civilians across the country were allegedly murdered by soldiers and presented as guerrilla fighters.

A distinctive feature of public service journalism is its ability fully to engage its audience. And to better achieve this, the stories must be compelling and well told. This is what Peru’s “Etiqueta Negra” and Argentina’s “Revista Anfibia” are doing. They are exponents of long-form narrative journalism, a genre that places social changes at the heart of their news agenda. They are concerned with themes that matter to civil society, something that mainstream commercial media – largely concerned with the financial and political élite – have neglected.

“Etiqueta Negra” – often called The New Yorker of Latin America – has succeeded in re-engaging audiences with stories that are not only aesthetically alluring but also deeply profound. From stories of displacement to exploitation, from corruption to racial and social discrimination, the journalism of “Etiqueta Negra” is a call for action and resistance.

“El Estornudo” has developed a similar agenda of resistance and public action in Cuba. It was born as a reaction to the official media that – as the editors said – “never narrate life because life is subversive” (Medium, 2016). Like “Etiqueta Negra”, this Cuban publication has resorted to the “crónica” to tell stories that matter to ordinary Cubans. This involves – as the editors said – “delving into the virtues and sins of a society: catch the common time of ordinary people and contrast it with the clock of power” (Medium, 2016).

Well-explained and contextualised stories are two principles guiding this public service journalism agenda. This is precisely what defines the agenda of Brazil’s “Nexos”. As Renata Rizz, cofounder of this publication, told Shan Wang, from the Nieman Foundation, “we do explanatory, contextualized news” (2017). Communicating with its readers is a key feature of Nexos. “We are taking a lot of suggestions from our readers. They talk to us when there are mistakes. They talk to us when there are compliments,” she told Wang (2017).

A 2017 study by SembraMedia showed that this new digitally native non-profit journalism is “deeply transforming the way that journalism is conducted” in Latin America (2017). It is not weaighed down by analgesic concepts such as objectivity, impartiality, or neutrality. Frankly, these are principles that don’t have a place in the practice of Latin American public service journalism.

So-called journalistic objectivity – emanating principally from the US journalism industry – is thrown out the window by the new breed of Latin American public service journalism platforms. And they don’t apologise for this. As the editors of Cuba’s “El Estornudo” put it, “We do not promise the impossible objectivity that academies preach” (Medium, 2016). They have replaced the so-called golden rule of journalism – objectivity – with far more suitable concepts: accuracy, fairness and veracity.

Virtually all the journalists interviewed for the SembraMedia study said they created media companies to provide a “public service”. And the majority of these journalism projects came after the devastating economic crisis of 2008. Mirroring the economic collapse in other sectors of the society thousands of journalists lost their jobs. The option ahead was challenging: to develop new models of journalism. One of the strategies to achieve this was to form alliances with organisations that were not necessarily journalistic but that shared the ethos of innovation and public service.

This is the case of Infoamazonia. Launched in 2012 Infoamazonia was created by Gustavo Faleiros, a Brazilian environmental reporter who has assembled a team of investigative journalists and environmental activists. Its public service role is to watchdog and map the activities underway in the Amazon rainforest.

All of these journalistic projects have – within their distinctive differences – common threads. They are concerned about power and the powerful. And they are, as Silvia Gómez suggests, “sowing the seeds of a political and intellectual culture” (2017:105). They incite and facilitate citizen’s participation in seeking remedies to wrongdoings.

All of them – and several others not mentioned in this article – are not only enriching the region’s journalistic ecology; but they also are helping Latin Americans actively to re-engage with problems neglected by the legacy commercial media. They are – as Costera Meijer suggests – “informing citizens in a way that enables them to act as citizens” (2001: 13).

The news agenda of these public service journalism expressions emanates from civil society. And in this context they are creating tools that allow audiences to access the information they need or want to have. In 2014, “Peru’s Ojo Público” created an app that allows anybody to know the wealth of the mayors of Lima, the capital.

A fundamental feature of the new wave of Latin American public service journalism is the role assigned to the audience. As is the case of CIPER the audience is at the centre of the investigations. “Many of the issues we investigate are based on complaints that come from our readers,” CIPER’s journalist Juan Pablo Figueroa told Belén Dupré (2009).

These new journalistic enterprises are aware of the need to know and engage its audience and not just – as Shoemaker & Vos put it (2009) – “imagine it.” As Ferrucci rightly said, “if a news organisation wants to help sustain democracy and serve its function in a democratic society, it should engage with its audience” (2016: 357).

With their self-assigned public service ideology, these new journalistic experiences have become a kind of virtual “Habermasian public sphere”. They have rekindled the decayed media space characterized by its outré commercialisation, concentration and complicity with the political élite.

In most parts of Latin America democracy is a pending task. The commercial and mainstream media are key conduits for the pursuit of financial and political power, of creating what can be called the “consensus of the élites”. This means the demobilisation of the people and the obliteration of their demands.

Hannah Arendt once said that “truthfulness has never been counted among the political virtues, and lies have always been regarded as justifiable tools in political dealings.” In a region where this statement strongly resonates, a handful of new journalistic projects are probing into official statements and making the sources of them accountable.

It is called “verification journalism” and in Latin America two of the leading journalistic platforms engaged in this are Argentina’s “Chequeando” and Colombia’s “ColombiaCheck”. Their service to the community is manifested in their commitment to verify the public discourse and declarations of public figures on matters that are relevant to the public debate.

Public service journalism in Latin America is a risky undertaking. Even more so when those behind these new journalistic projects – such as Crisitian Alarcón, Director of Argentina’s Revista Anfibia – believe that “the fundamental thing in journalism is still that we bother someone” (Fernández, 2017). The region has fragile democracies and the work of these new journalistic expressions is not easy. The reporting of narcotrafficking – a major problem in the region – has caused the death of dozens of journalists. In Mexico the killing of independent bloggers has terrorised society.

According to the 2017 SembraMedia study, mentioned above, at a regional level almost 50% of digital media in Latin America have been victims of threats or attacks, while 45% were victims of violence because of their journalistic work (SembraMedia, 2017). They suffered kidnapping, physical threats, lawsuits, and hacking.

Yet, despite these threats, the new breed of Latin American journalism is committed to strengthening its watchdog role, a role that is in essence a major public service to Latin American society. Without them, the construction of a better region, from Mexico down to Argentina, would be unattainable.

Dr Antonio Castillo is a Latin American journalist and a senior journalism academic at RMIT University in Melbourne, Australia.