‘A new way of doing radio’ in Oaxaca and Hidalgo
21393
post-template-default,single,single-post,postid-21393,single-format-standard,theme-bridge,bridge-core-3.0.1,woocommerce-no-js,qodef-qi--no-touch,qi-addons-for-elementor-1.5.6,qode-page-transition-enabled,ajax_fade,page_not_loaded,,qode-title-hidden,columns-4,qode-child-theme-ver-1.0.0,qode-theme-ver-29.2,qode-theme-bridge,qode_header_in_grid,qode-wpml-enabled,wpb-js-composer js-comp-ver-6.10.0,vc_responsive,elementor-default,elementor-kit-41156 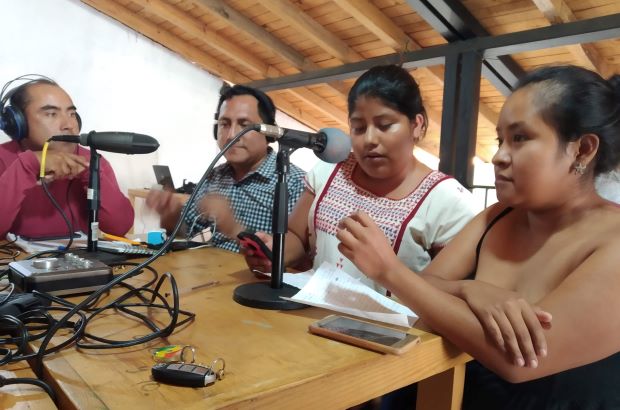 Twelve women and 12 men from 10 community and Indigenous radio stations in the states of Oaxaca and Hidalgo, Mexico, have taken part in a WACC-supported media training that left many enthused about “a new way of doing radio.”

Over a seven-month period, participants took part in seven workshops on media production, equipment maintenance, gender justice, the use of open source software, and legislation.

The major outcome of the project “is a community media sector with a greater capacity to operate in a context marked by growing threats to freedom of expression, collective rights, and Indigenous rights in these two states,” said a report from WACC partner Japexunk Investigación y Comunicación para el Desarrollo S.C.

At the end of the training, “most participants demonstrated increased capacity, a better understanding of key issues, and a willingness to work as a network, thus enhancing the potential for medium term sustainability,” it added.

Based in Oaxaca, Japexunk is a network of activists working to end discrimination against Indigenous people and strengthen different expressions of Indigenous culture. Over the past 15 years, it has worked to establish Indigenous communication platforms, advance Indigenous women’s rights, and promote intercultural education.
Japexunk’s project sought to strengthen community media in Oaxaca and Hidalgo by providing technical training, capacity development in relation to national broadcasting legislation, and equipping communicators with new knowledge about digital communication and open source software. 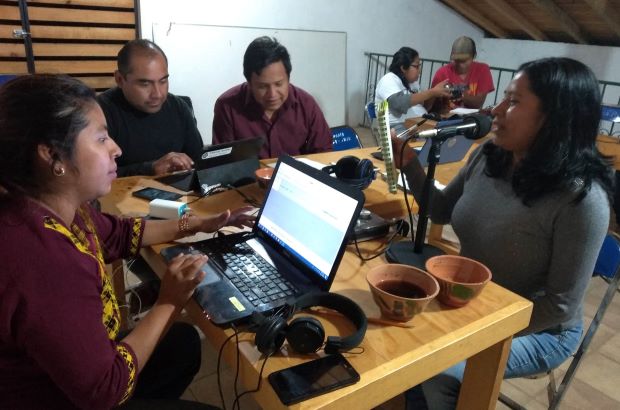 A participant from Ximai Radio said the training “opened me up to another vision when we talked about Indigenous communication, the decolonization of knowledge, and working hand in hand with colleagues of our collective in Hidalgo.” The participant added: “It has given us a new way of doing radio. We saw other spaces that we did not visualize before – the programs, soundscapes, digital security. We have lost the fear of better handling new technologies and they have given us more tools.”

A participant from Radio Ayuk, in San Juan Guichicovi, Oaxaca, said the workshops have revitalized him and his work. “I have not attended workshops like these before. I had lost the emotion, the spark of doing radio…This has helped me; it’s very productive. It has reminded us that we are alive and that we can make a change in our communities.”

As a result of the training, four of the participating radio stations have began the process of applying for a broadcasting license, said Japexunk. Participants are now using open source software for broadcasting and editing, it added.

Each station produced content on local issues and communication rights. Some of these were broadcast by Radio Educacion Instituto Politecnico Nacional, a Mexico City-based radio station whose signal reaches the entire country.

Lorenzo Vargas, WACC Program Manager for Communication for Social Change said WACC supported the project because “it is committed to advancing the communication rights of Indigenous peoples around the world.”

WACC believes that “access to communication platforms and freedom of expression that upholds Indigenous heritage are key to upholding Indigenous rights frameworks, including the UN Declaration on the Rights of Indigenous Peoples,” said Vargas. “WACC was very happy to work with Japexunk on this project as we felt it sought to put this vision into practice.”

The project was partly funded by Bread for the World, Germany.

Photo above: Community radio stations now have a “greater capacity to operate in a context marked by growing threats to freedom of expression, collective rights, and Indigenous rights,” said the organizers of the media training. By Japexunk Investigación y Comunicación para el Desarrollo S.C.