Posted at 08:17h in Media Development by wacc_kn 0 Comments 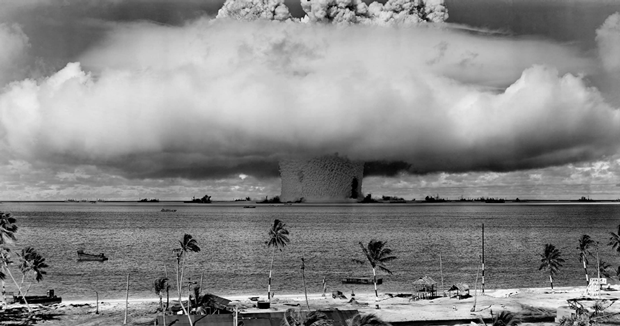 2014 marks the 40th year of the Pacific Conference of Churches’ efforts to bring justice to a region affected by nuclear testing.

In 1967 the Young Women’s Christian Association and the Student Christian Movement in Suva, Fiji’s capital, convened a meeting on nuclear testing on Moruroa, Maohi Nui (French Polynesia). Two years later, a large march took place in Suva against nuclear testing, and after a further five years the PCC Executive Committee passed resolutions in opposition to tests in the region.

But for almost 70 years since the United States’ first Pacific nuclear test on Bikini in 1946, church members have been forced to live with the legacy of this menace. Three of the world’s major powers – the US, Britain and France – conducted nuclear tests in the Pacific with blatant disregard for human life and the environment. This unwanted activity has maimed generations of Pacific people and hundreds of European servicemen and their families. To this day, they continue the fight for justice, knocking on the doors of governments, pleading for compensation, yet their cries fall on deaf ears.

The families of Fijian servicemen who took part in tests as part of “Operation Grapple” near Kiritimati Atoll from 1957 to 1958 continue to wait for compensation from Britain. In Maohi Nui (French Polynesia), local landowners remain unpaid for the damage caused on Moruroa and Fangataufa during nuclear testing between 1966 and 1996.

Today, despite the end of tests in the region, the Pacific continues to face two specific nuclear threats: the persistent radioactive contamination from the tests and the newer issue of fallout from the Fukushima nuclear power plant in Japan.

In March 2013 the PCC General Assembly in Honiara, the Solomon Islands, agreed to remain steadfast in its stand against nuclear testing and for the compensation of victims of this Western influence. The churches recognise that justice is an integral part of peace. Many of the Pacific’s communities do not have peace because they continue to battle for justice. This includes recognition of the intergenerational damage caused to the environment and human life by nuclear tests.

Our people remain in mental turmoil, seeking justice for the misuse of their lands and resources. The Pacific churches – through leaders such as Anglican priest Father Walter Lini of Vanuatu, Methodist Reverend Setareki Tuilovoni of Fiji, and John Doom of the Maohi Protestant Church – initiated the battle for justice and the end to nuclear testing. And with the resolution of the PCC General Assembly in 2013, Pacific governments have been urged to consistently call for the abolition of nuclear weapons and the just treatment of those affected by nuclear activities. This must continue despite the aid offered by Japan, China, France, the US and Britain.

To this end, it is necessary that our regional leaders – secular and faith-based – recognise the threats of nuclear weapons and speak forcefully for a ban. In international forums, including conferences on the humanitarian impact of nuclear weapons, the Pacific must speak with a united voice to bring about attitudinal change in the larger nations.

We must speak out, for if we remain silent the larger countries will be under the misconception that their testing, development and construction of nuclear weapons are acceptable. In this shrinking world, it is quite possible for the Pacific to be affected by nuclear fallout half-way across the world in less than a week. That is why we will continue to call for a global ban on nuclear weapons. These weapons are no good for the Pacific, and no good for the world.