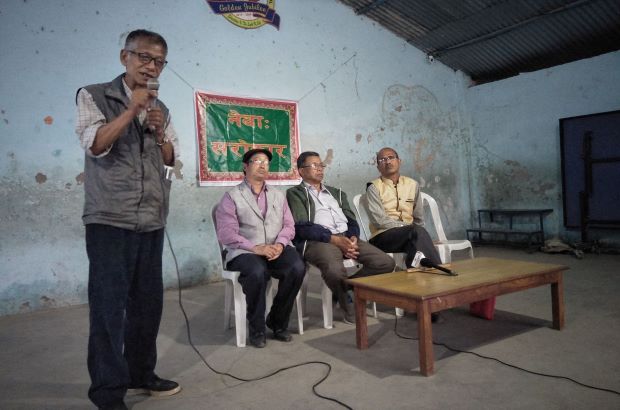 Radio Newa FM, a community radio station based in Kirtipur, Nepal, has launched a series of field visits and dialogues on Indigenous heritage and Indigenous rights across the Kathmandu Valley.

The dialogues– co-funded by WACC Global and Cultural Survival – were part of the radio station’s project to enhance the language, literature and culture of the Newar, one of 59 Indigenous peoples recognized by the Nepal government. The Newar community comprise about half of Kathmandu Valley’s population.

The Newa FM project aims to convene 20 public events on Indigenous rights and heritage, which will involve elders, youth, and policy makers.

On June 19, Nepali Prime Minister Khadga Prasad Oli announced the bill would be withdrawn, following a series of mass protests that began shortly after the government filed the bill . Protesters accused the government of attempting to “delete” Indigenous history by “taking away their customary institutions.”

The Guthi was introduced in the 5th century to organize the religious and social activities of Newar people, explained Newa FM in its interim report to WACC.  It is also the means by which Newar Indigenous people are able to exercise autonomy, Newa FM added.
Present at the dialogue were trustees of the Guthi, and representatives of Newa De Dabu, the national organization of Newar Indigenous people, who said the bill was an attack on the culture and civilization of Indigenous Newars.

An earlier dialogue, held July 6 in the village of Thankot, discussed the Nepal government’s road expansion drive, which has resulted in the displacement of Indigenous communities.

Community members raised concerns that they have not only lost their land, but their identity, said Newa FM’s report.

Earlier, the community’s advocacy, which included protest actions and the filing of writ petitions, prompted the Supreme Court of Nepal to direct the government to stop displacing people without their consent and to provide adequate compensation to those affected by the road expansion.
The government has, however, ignored the judgment and continued expanding the road, said Radio Newa FM. Community members who participated in the dialogue have agreed to unite and pressure the government to implement the Supreme Court judgement, it added.

Apart from the issues of road expansion and the Guthi Bill, the Newar community faces the challenge of having young Newaris who are losing contact with their culture and who lack an understanding of their rights as Indigenous people, said Newa FM.

Newa FM, which has been serving the Newar communities, has a mandate to preserve the cultural heritage of the Newar people, as well as to advance their rights, including access to media and information. It operates entirely in the Bhasa Newari Indigenous language, produces about nine hours of programming daily, and is able to reach communities across the valley, including Kathmandu, Lalitpur, Bhaktapur, Makawanpur, Nuwakot, and Dhading districts.

“WACC is proud to be partnering with Newa FM,” said Lorenzo Vargas, Program Manager for Communication for Social Change. “Their work is a clear example of the importance of communication and information issues in relation to inclusive, culturally-sensitive, and sustainable development.”

Photo above: One of 20 public events on Indigenous rights and heritage being hosted across Kathmandu Valley by Radio Newa FM, a community radio station based in Kirtipur, Nepal.