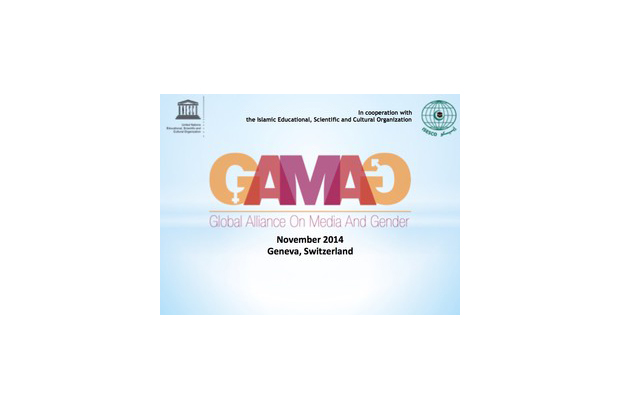 The Global Alliance on Media and Gender has called on U.N. member states to include strong provisions on gender, media and information and communication technologies (ICTs) in the post- 2015 Sustainable Development Goals.

“We cannot talk about equality, good governance, freedom of expression and sustainability when women are effectively silenced in and through the media, and where new technologies are used to undermine the human rights of women and women journalists,” noted the international steering committee of (GAMAG), a network of 500 media groups, unions and organizations.

WACC is a member of GAMAG’s International Steering Committee, which held its first meeting in Geneva 4-5 November 2014 under the auspices of UNESCO.

GAMAG said the right to communicate and access to information and technology are integral to sustainable development. “This issue is glaringly missing from the 17 SDGs and the 169 targets that will replace the Millennium Development Goals next year.”

GAMAG noted that WACC’s Global Media Monitoring Project (GMMP) shows that women constitute a mere 24% of news sources. Another global study by the International Women’s Media Foundation (IWMF) shows that women constitute 36% of reporters and a quarter of media decision-makers. A range of studies shows a growing gender gap in access to and ownership of ICTs. New media are also fuelling new forms of violence against women and girls ranging from stalking and trolling to human trafficking.

Threats and violence against media workers in general, especially with regard to deadly attacks, are well-documented by organizations like the World Association of Newspapers and News Publishers, the International Federation of Journalists, Committee to Protect Journalists and Reporters Sans Frontières. But there is no group collecting data on security threats to women journalists globally. Attacks against female media workers are only reported anecdotally, if at all, by international media support organizations.

GAMAG said these provisions should be included in the SDGs:

GAMAG was launched after a watershed UNESCO and ISESCO -led conference on gender and the media in Bangkok in December 2013. GAMAG seeks to harness new opportunities, and address new challenges, for gender equality and women’s empowerment in and through media in an information society context which has radically transformed media architectures.