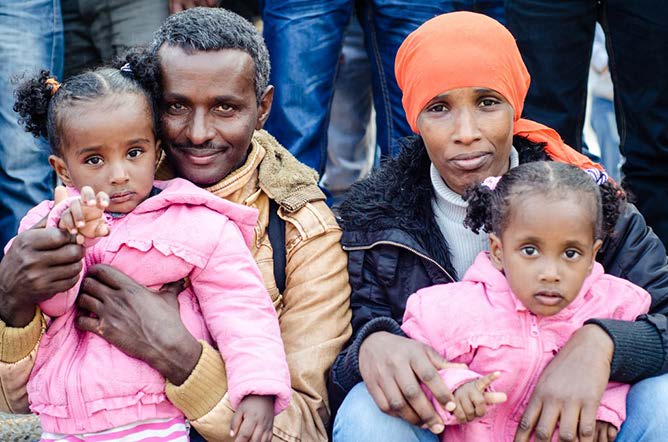 More than 60 million people were forcefully displaced from their homes in recent years, making the contemporary refugee crisis the most significant human tragedy of contemporary times. At the borders of “Fortress Europe”, in huge camps all through the Middle East, asylum seekers’ cry for help is reshaping societies’ politics. While the refugee crisis emerges for a variety of reasons and materializes in different ways − in the meaning of shelter, the international human rights regime and its weaknesses (to list only few) − this article deals with a somewhat less explored relationship between the asylum seekers’ need to be recognized as refugees and its relation with society’s memory in the new media era.

According to the 1951 Geneva Convention, a refugee is a person that “owing to a well-founded fear of being persecuted for reasons of race, religion, nationality, membership of a particular social group or political opinion” is forcefully displaced from his country of origin and is unable to return.1 Alongside defining who is a “refugee”, the convention requires host countries to protect refugees’ livelihoods, and appoints the international community to supervise the upholding of these obligations. Consequently, the term “refugee”, is not only a mere descriptor, but rather it is an aspired legal status with normative and ethical implications, crucial to asylum seekers’ well-being. Indeed, it is the act of approving (or more commonly disapproving) an individual asylum seeker’s request to be recognized as a refugee, that stands at the heart of the asylum seekers’ plight wherever they may be.

Alasdair MacIntyre, the Scottish philosopher, has already stipulated that human beings are above all “storytelling animals” (MacIntyre 1984). According to him, being able to construct, reconstruct and mediate unique memories and life stories is an integral part of any individual’s well-being. This is even more detrimental when it comes to contemporary asylum-seekers and their quest to be recognized as refugees. Stories asylum seekers tell are the data that is being used by host country authorities to determine whether an individual is indeed someone who escaped from persecution for “reasons of race, religion, nationality, membership of a particular social group or political opinion” as she or he is claiming. These stories are evaluated on the national level as part of the “Refugee Status Determination” (RSD) process that should include a thorough and strict examination, which helps state official determine whether an asylum seeker is indeed a refugee.

The RSD process, however, is never conducted in a social vacuum. It is highly affected by public perceptions about asylum seekers and the perceived truthfulness of their life-stories. In Israel, for example, there is an intense debate regarding asylum seekers from Sudan and Eritrea and their “refugeeness”. As part of this debate, state officials refer to asylum seekers as “illegal infiltrators” seeking work in a prosperous country. No wonder Israel only recognized a handful of asylum seekers as refugees, even when the UNHCR claims that most people coming from these two countries are indeed refugees.

As such, and as part of their attempt to be recognized as refugees, asylum seekers struggle to have their life stories, narratives and collective memories acknowledged by respective authorities and heard in the public sphere. Mostly, this struggle takes place in the media. Through media, citizens of the host society encounter the stories of asylum seekers, and it is this encounter that eventually shapes public attitudes towards asylum seekers and refugees.

Conversely, when the Israeli government claims that they are in fact “economic migrants”, who have illegally crossed the Israeli border, it tells Israeli society a very different story – a story that may include financial deprivation or other forms of injustice, but is insufficient for granting African asylum seekers official recognition as refugees.

These clashing narratives operate within a mediated scene that is not neutral. In recent studies (Tirosh, forthcoming; Tirosh & Klein-Avraham, forthcoming), we demonstrate that local media outlets actively engage in the debate about asylum seekers’ and refugees’ rights. While using intrinsic professional capabilities (textual and visual framing techniques, in our case) media cause harm to the asylum seekers’ attempt to be recognized as refugees by the authorities. The way newspapers report about refugees and their protests, we discovered, diminishes, alters and often negates the refugees’ narrative.

We reveal that while traditional media may be an important arena in which society engages and debates asylum seekers’ narratives and rights, asylum seekers themselves stand in a weaker position at this encounter. This is a direct outcome of traditional media’s inherent characteristics, and might be solved with the unique affordances of contemporary media.

About “old” and “new” media

Traditional media have been mostly interpersonal, unidirectional, stationary, and limited in their capacity to carry information. Most importantly, it is the media owners, and those serving as “gatekeepers” on their behalf, that grant access to the media. In the case of asylum seekers this access is limited and insufficient − as their voices are subverted and weakened. Yet, contemporary media may potentially change this unequal playing field.

Contemporary media contain novel characteristics (Schejter & Tirosh, 2016). In contrast to traditional media, contemporary media are characterized by their mobility, abundance, multimediality, and interactivity. They enable communicating at will from a variety of locations; there is an abundant amount of information available through them, virtually an infinite number of “channels” to access this information, and a wealth of space to store it; an individual can mediate a message utilizing any or all of a variety of forms of expression, including text, still photos, graphics, sound and video, or any combination at will; and their interactivity enables users to contribute to the content of the communication process in which they are involved, and to create and design their own mediated environment.

Evaluating how these new characteristics may have already altered society’s memory, prominent scholars have claimed that contemporary media changed the whole meaning of memory and created new ways to operate within society’s memory field. The question, then, is: if asylum seekers are in need of having their life stories shared and heard in society’s memory sphere, how can new media contribute to their struggle?

Asylum seekers use contemporary media throughout their migration process. These technologies enable them to intermingle within the new world that they are joining. They search the internet for information, communicate with their friends using social media and use their smartphones to navigate in new and unfamiliar locales.

Alongside these daily mediated practices, asylum seekers may use contemporary media as part of their struggle to be recognized as refugees. For example, an individual asylum seeker from Eritrea, seeking shelter in Israel, can use his Facebook account, the most prominent social media platform in Israel, in order to detail his life story. In many cases, these stories are comprised of forced recruitment to the Eritrean army for an unknown period of time and life-threatening attempts to escape such constraints.

Others say that they were regarded as political opponents of the Eritrean dictator, Isaias Afwerki. As Eritrea is constantly considered one of the countries that systematically infringe its citizens’ human rights,2 fleeing the country after being labelled an opponent of the regime is a valid reason to be recognized as a refugee in a shelter state.

In the mediated environment of the past, reaching out to mass audiences when offering society a historical narrative was a privilege reserved for those already powerful. In the new media environment, new agents operate in society’s new memory sphere – which is accessible to society at large. In other words, when many more individuals, also those less powerful, can share their personal narratives and life stories with their respective society, while using new media outlets, they turn individual historic narrative into an integral aspect of society’s memory.

As such, through contemporary media, and asylum seekers’ ability to turn them into public arenas where they can share their stories, host society citizens can encounter often negated asylum seekers’ narratives. This encounter, as already discussed, can potentially impact what society thinks about asylum seekers and may increase their chances to be recognized as refugees. This, I believe, demonstrates how contemporary media may be used as tools for those dealing with memory ethics — the normative aspects of how society remembers, what society forgets, and who are the actors that may influence these delicate process.

In this article, I argue that there is an inherent connection between asylum seekers’ narratives, their ability to share these narratives and their recognition as refugees. Contemporary media have the potential to be a fundamental tool at the hands of asylum seekers when they struggle to obtain this recognition. Taking this perspective into account, asylum seekers and activists who struggle for their well-being should start thinking about asylum seekers’ media and communication rights, and to consider them as an integral part of their demand to be recognized as refugees. Facebook is not only the virtual arena where asylum seekers spend their free time; it is where they can influence discussions about their rights and legal status.

As such, those who wish to help local asylum seekers should demand a new media policy that addresses the question of asylum seekers’ access to media and their ability to use media in their daily life. This may assist asylum seekers in realizing their “right to memory”, overcoming bureaucratic obstacles that deny them the protective legal status they aspire to: that of refugees.

Maclntyre, A. (1984). The Virtues, the Unity of Human Life, and the Concept of a Tradition. In: Sandel, J.M. (ed). Liberalism and its Critics. New-York: New York University Press.
Schejter, A. & Tirosh, N. (2016). A Justice-Based Approach for New Media Policy: In the Paths of Righteousness. London: Palgrave-McMillan.
Tirosh, N. (Forthcoming). Dominant News Frames, Collective Memory and the African Asylum seekers’ Protest in Israel. American Behavioral Scientist.
Tirosh, N. & Klein-Avraham, I. (forthcoming). ‘Memoryless’: The Visual Framing of Refugees in Israel. Journalism Studies.

Noam Tirosh, PhD, is  a lecturer at the department of Communication Studies, Ben-Gurion University of the Negev. His research focuses on the relationship between memory, media, and justice. His work has been published in the journals Media, Culture and Society, The Communication Review, Telecommunication Policy, Critical Studies in Media and Communications, The Information Society, International Journal of Media and Cultural Politics, and others. He has participated in various international conferences and his 2015 article “Revisiting the Right to be Forgotten” was awarded “best student paper” by the Research Conference on Communication, Information and Internet Policy (TPRC).