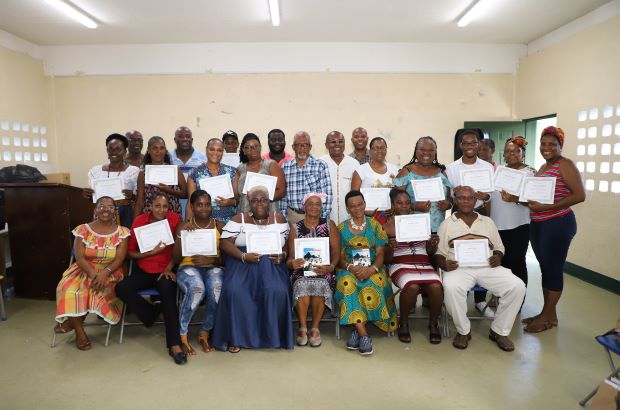 About 75 Kwéyòl-speaking Saint Lucians have now increased their knowledge of the language of climate change and sustainable development in Kwéyòl, thanks to a WACC-supported project developed by the Folk Research Centre (FRC).  FRC is a local NGO devoted to the research, study, recording and promotion of Saint Lucian cultural heritage.

FRC’s project was aimed at involving grassroots Kwéyòl-speaking communities in efforts to “advance sustainable development, particularly in relation to environmental issues.” The project was implemented in partnership with the United Nations Development Programme office in Saint Lucia.

Linguistic barriers have hindered Kwéyòl-speaking communities from participating fully in development matters “despite being at the centre of processes of social change,” said Lorenzo Vargas, WACC manager for Communication for Social Change.

During a 10-week course, community leaders from the communities of Monchy, Babonneau and Mon Repos were trained on how to produce media content in the Kweyol language, with a focus on sustainable development and environmental issues, as well as literacy. Sixty per cent of the participants were women.

In addition to the course, the FRC also organized a “Sustainable Development Retreat,” in which Kwéyòl language idioms, proverbs, stories, and cultural performances were used to familiarize participants with the SDGs.

Another workshop helped refine their skills on using the Kwéyòl language on social media.

The project also enabled participants to attend a national climate change conference in Saint Lucia, ‘A Climate Crisis: A Call to Action’, where they presented their creative work on using Kwéyòl to promote the SDGs.

Established in 1973, the FRC has promoted the role of folk art as a vehicle for social change. It houses an extensive library of publications, audio visual recordings and photographs and is the major study centre for work carried out on Saint Lucia’s folk culture by local and visiting researchers.

Photo above: A 10-week course trained community leaders from Monchy, Babonneau and Mon Repos were trained on how to produce media content in the Kweyol language, focusing on sustainable development and environmental issues, as well as literacy. Photo: Folk Research Centre