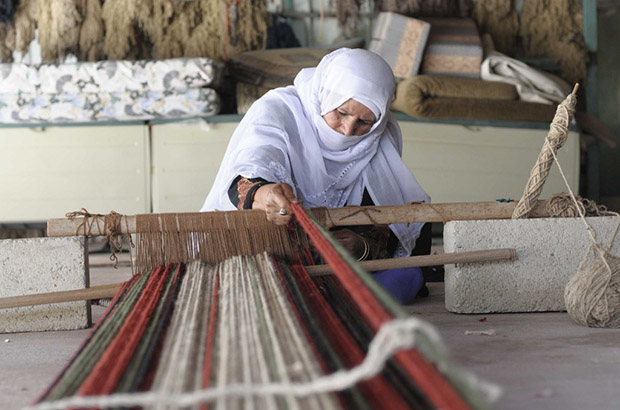 Sidreh-Lakiya weaving supports and accompanies Bedouin women in the Negev in their quest to open their own businesses, develop a solid sense of self-worth, and become recognized as significant members of the household. Photo: Sidreh-Lakiya.

The director of an organization based in Israel dedicated to improving the lives of Bedouin women has received a “Women Add Value” award for humanitarian leadership.

Khadra Al Sana, director of Sidreh-Lakiya, was recognized by iChange Nations, an organization affiliated with the Interfaith Peace-Building Initiative Organization, Department of Public Information of the United Nations. Sidreh is a former WACC project partner.

The recognition was awarded in Magdala, Israel. According to the citation, Khadra was recognized for her “heart and compassion towards others.” The award letter further stated that Khadra has “impacted your community and nation with trust, dignity and has improved the quality of life by those you have touched through your humanitarian leadership under the organization which you serve.”

Among the other recipients of the award were women who made considerable contributions to science, sports, education and interfaith understanding.

Khadra’s project, Palestinian-Bedouin Women Speak Up, aimed to make a positive difference in the lives of Bedouin women in the Negev by promoting gender equality and meaningful participation in public life. It improved the social position and communication rights of Bedouin women by building local capacities and empowering them to gain a public voice through mainstream and alternative media outlets.

The outcomes of the project were:

A key learning was that the project partner understands the importance of building a comprehensive advocacy plan, and is currently composing one to guide its work in this field for the next few years. It is especially important to continue with the main goal of making heard the voices of Bedouin women by the Israeli government, which is sometimes most effectively done through international actors and partners.

WACC’s project partner also discovered that as women become more visible in community activities and public life, there continue to be strong (usually male) voices that seek to stop their involvement through threats and intimidation.

In response, Sidreh-Lakiya is developing projects that will directly address this atmosphere of intimidation by creating safe spaces for women to learn skills for leadership. It is also reaching out to women’s legal protection organizations in order to ensure that women leaders have access to all the protection and resources they need.