Posted at 11:35h in Media Development by wacc_kn 0 Comments

Freedom of religion in Burma has become a controversial political issue after the Burmese government published a religious conversion bill in state-owned newspapers in May 2014 inviting input from citizens. The publication followed a pro-bill campaign spearheaded by a group of Buddhist monks called the Organization for Protection of National Race and Religion.

Calling the draft law a breach of “every tenet of religious freedom”, Human Rights Watch (HRW) said it meant “any Burmese citizen who plans to change religion must seek a series of permissions from local representatives of government departments, including the Ministries of Religion, Education, Immigration and Population, and Women’s Affairs, and wait 90 days for permission to be granted.”

According to HRW, “If enacted, the bill would violate Burma’s obligations to uphold the rights to freedom of religion, conscience, and expression under international law. The proposed restrictions on conversion, proselytizing, and speech contravene the Universal Declaration of Human Rights, which states that ‘everyone has the right to freedom of thought, conscience and religion; this right includes freedom to change his religion or belief, and freedom’.”

The proposed law could also violate the rights of women “freely to choose a spouse and to enter into marriage,” under the Convention on the Elimination of All Forms of Discrimination against Women (CEDAW), to which Burma is a signatory.

In June 2014, three United Nations experts on freedom of religion, minority issues and human rights in Myanmar called on the Government of Myanmar to discard the draft bill. The then Special Rapporteur on freedom of religion or belief, Heiner Bielefeldt, noted that “State interferences into the right to change one’s religion or belief are per se illegitimate and incompatible with international human rights standards.”

The Ministry of Religious Affairs in Burma drafted the law as part of a series of four related to religion, marriage, polygamy, and family planning, comprising a legislative package “on the protection of race and religion.” 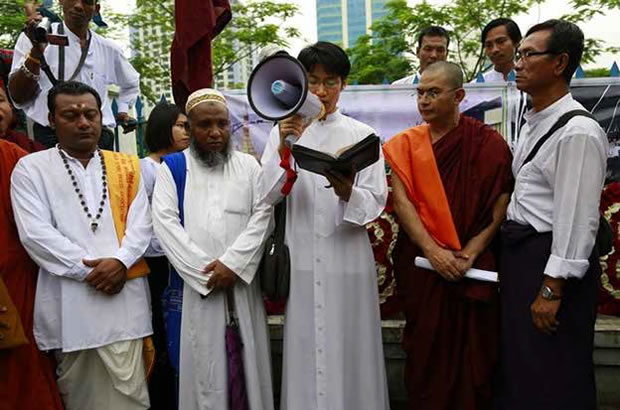 Religions leaders pray for those who died in the 1988 democratic uprising, also known as 8888, on the 25th anniversary, in Yangon August 8, 2013. Photo: Reuters/ Soe Zeya Tun.

Many have criticized the role of Buddhist monks in stage-managing the proposed bill. Buddhist monks have considerable political stature in Burma. They were major players both in the struggle to regain independence from British colonial rule and in democracy movements, including the “Saffron Revolution”, the months-long protests in 2007 against the then military government.

At a 13 June 2014 press conference in Yangon, Ashin Wirathu, an influential and well-known monk who has sparked fierce criticism for his anti-Muslim speeches, told reporters, “I have dreamed of this law for a long time. It is important to have this law to protect our Buddhist women’s freedom.”

The proposed bill resulted from a petition filed by the Buddhist monks movement and signed by more than 1.3 million people with the aim of “protecting the race and religion of the majority Buddhist nation.” The promoter group is the nationalist “969 Movement”, which is opposed to what it sees as Islam’s expansion in predominantly-Buddhist Burma. It has organized public demonstrations of hatred and violence against Burmese Muslims.

Aung San Suu Kyi, leader of the “National League for Democracy”, has also criticized the proposal, saying it discriminates against women and violates human rights and personal freedoms. And on 12 June 2014, over 80 organizations from civil society worldwide called on the Government of Burma to scrap the proposed legislation, saying that it would violate fundamental human rights and could lead to further violence against Muslims and other religious minorities in the country. They urged the government to:

1. Amend all other legislation to ensure that it incorporates the principles set out in Article 18 of the UDHR, which reads: “Everyone has the right to freedom of thought, conscience and religion; this right includes freedom to change his religion or belief, and freedom, either alone or in community with others and in public or private, to manifest his religion or belief in teaching, practice, worship and observance.”;

2. Sign and ratify the International Covenant on Civil and Political Rights (ICCPR), without reservation to Article 18;

3. Sign and ratify the International Convention on the Elimination of All Forms of Racial Discrimination (ICERD);

4. Extend official and unconditional invitations to the UN Special Rapporteur on freedom of religion or belief and the UN Special Rapporteur on contemporary forms of racism, racial discrimination, xenophobia and related intolerance to visit the country, and to travel within the country and meet representatives of different communities, political actors and civil society organizations without restriction or hindrance;

5. Study and implement the recommendations of the most recent report of the UN Special Rapporteur on freedom of religion or belief to the UN Human Rights Council, with regard to measures to address collective hate speech [iv];

6. Study and implement the recommendations of the Rabat Plan of Action on the prohibition of advocacy of national, racial or religious hatred that constitutes incitement to discrimination, hostility or violence, which was adopted by experts including the UN Special Rapporteur on Freedom of Expression and Opinion and the Special Rapporteur on Freedom of Religion or Belief in Rabat, Morocco in October 2012 [v];

7. Abolish the Ministry of Religious Affairs and replace it with an independent and impartial religious affairs commission with a mandate to eliminate all forms of religious discrimination;

8. Remove the requirement to list religion on the National Registration Card.

In addition, they called on the international community to publicly urge the Government of Burma/Myanmar to immediately scrap the proposed legislation.

The international community must make concerted efforts to press the Government to implement the above recommendations as a matter of priority, in order to protect the right to freedom of religion or belief and to prevent further violence against religious minorities.