Cambodia: a long way towards freedom of expression
20676
post-template-default,single,single-post,postid-20676,single-format-standard,theme-bridge,bridge-core-3.0.1,woocommerce-no-js,qodef-qi--no-touch,qi-addons-for-elementor-1.5.6,qode-page-transition-enabled,ajax_fade,page_not_loaded,,qode-title-hidden,columns-4,qode-child-theme-ver-1.0.0,qode-theme-ver-29.2,qode-theme-bridge,qode_header_in_grid,qode-wpml-enabled,wpb-js-composer js-comp-ver-6.10.0,vc_responsive,elementor-default,elementor-kit-41156

23 Feb 2015 Cambodia: a long way towards freedom of expression

Freedom of expression is supposedly guaranteed in Cambodia. Both domestic laws and international instruments that Cambodia is bound by protect this fundamental right.1 Yet, restrictive legislation, media censorship and judicial harassment of civil society actors have created a culture of silence and impeded full enjoyment of this right. The situation of freedom of expression in the country remains dire.

Article 41 of the Constitution of the Kingdom of Cambodia (“the Constitution”) guarantees all Cambodian citizens the rights to freedom of expression, information and publication within boundaries that would appear reasonable to most analysts.2 Despite this, several other domestic laws clearly contradict both the Constitution and Cambodia’s international obligations, thereby creating a tortuous legislative framework that severely undermines the exercise of those fundamental freedoms.

At first glance, the 1995 Press Law takes a relatively liberal and protective approach.3 Article 1 of the law guarantees freedom of expression in print media and “assures freedom of the press and freedom of publication in conformity with Articles 31 and 41 of the constitution.” However, subsequent content limitations prohibit any publication that may affect “public order by directly inciting one or more persons to commit violence” (Article 11), “national security and political security” (Article 12) or the “good customs of society” (Article 14). 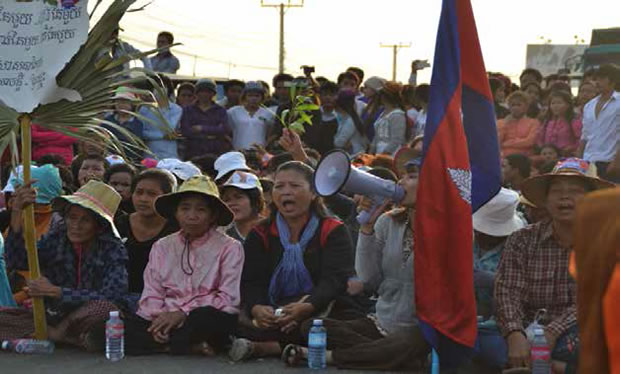 In fact, the law fails to explain these very broad or undefined limitations, therefore posing serious challenges when it comes to implementation and undermining the ostensible scope of Article 1. In addition, the Press Law largely constrains criticism of public officials and institutions, and hence the right to freedom of expression, by stating that the press “shall not publish or reproduce false information which humiliates or contempt national institution”.4 Journalists who violate this vague provision can be fined a sum of between 2,000,000 and 10,000,000 Riels (USD $490 – $2470).

While the Press Law provides that “no person shall be arrested or subject to criminal charges as the result of the expression of opinions”,5 other Cambodian law criminalizes defamation. The criminalization of defamation, together with several other provisions contained in the 2009 Cambodian Criminal Code that restrict freedom of expression such as those relating to public insult, discrediting judicial decisions or incitement to commit felony, further stifles the right to freedom of expression. Indeed, those provisions can lead to long-term prison sentences and the Royal Government of Cambodia (“RGC”) has repeatedly used them as tools to crack down on the exercise of free speech by journalists, political opponents, human rights defenders and other activists.6 Interestingly, during the last United Nations Universal Periodic Review (“UPR”) of Cambodia in 2014, the RGC noted, which essentially means ignored, those recommendations directly requesting the repeal or amendment of those articles of the Criminal Code.

Other UPR recommendations, this time accepted, urged Cambodia to comply with its commitment to guarantee fundamental freedoms, including establishing a law on freedom of information as an essential component of freedom of opinion and expression.7 Article 19 of the International Covenant on Civil and Political Rights (“ICCPR”), which Cambodia acceded to in 1992,8 states that the right to freedom of expression “shall include freedom to seek, receive and impart information and ideas of all kinds.”9 The steps that have been taken towards adopting freedom of information legislation and policy are encouraging, but little tangible progress has been registered so far. The appointment of ministry spokespersons to answer queries from the media was a welcome development in that direction.

However, Cambodia has not adopted any law on access to information (“A2I”) yet and the principle of maximum disclosure has to be fully embraced, even by ministry spokespersons appointed to share information. In March 2011, in response to increasing demands from international actors for access to information, the RGC established the Press and Quick Reaction Unit (“PQRU”) to relay information to the press on issues relating to military action, diplomacy and national security.10 The founding of this unit was an important step in providing swift access to information. However, the government has utilized the PQRU for its own political ends. This lack of access to adequate and unbiased information severely hinders the formation and dissemination of free opinions.

Freedom of expression encountered another serious obstacle in the 2010 Anti-Corruption Law, which fails to provide a legal framework for the physical and legal protection of individuals who blow the whistle on corruption. In fact, Article 41 of the law creates criminal offences for leaking information and for making false complaints of corruption.11 It is nevertheless unclear whether an incorrect complaint, rather than a deliberately false one, would constitute an offence under the Law. The intent to create a new law to protect whistleblowers has recently been reported by the media,12 but the currently existing provisions, and the lack of certainty as to how they will be interpreted, are likely to deter those who might come forward with information about corruption.

Censorship and repression of dissent

Over the past year, restrictions and repression of freedom of expression, affecting especially but not only the media, have markedly increased in Cambodia.

Traditional media, namely print, radio and television, remain the main source of information for most Cambodians; however, few have access to unbiased news. Free media, indispensable to safeguarding freedom of expression and the dissemination of information in a democracy, are quite rare in Cambodia. The government and the ruling Cambodian People’s Party (“CPP”) control most of the media and there is no law on broadcasting. Newspapers, television and radio outlets require a license from the Ministry of Information (“MoI”) prior to beginning publishing or broadcasting.13 The CPP either directly owns or holds a position of strong influence over all of Cambodia’s 11 television networks. An advisor to Prime Minister Hun Sen owns the country’s most popular TV station, the Cambodian Television Network, while his daughter owns another popular channel, Bayon TV.

The lack of independent outlets has significantly hindered the capacity of TV as a space for exercising the right to freedom of opinion and expression, particularly during election time. Election observers noted severely biased reporting in the run up to the 2013 elections. Bayon TV broadcast more than 15 hours of coverage of CPP activities and programs, while opposition parties were allowed less than two hours.14

Radio is also central to Cambodian society. It provides information to a larg public, especially in the provinces and rural areas. Significantly, with 74 radio stations officially registered in Cambodia,15 only three are independent. Among the latter, 105 FM Beehive radio has become a prime example of the struggle for freedom of expression and opinion. Because of its critical positions, Beehive radio has been shut down several times and its owner, Mam Sonando, arrested three times, most recently on charges of secession and incitement to take up arms related to a land dispute in Kratie, a province in the South of Cambodia.16

Judicial harassment and physical attacks against human rights activists and journalists are also routine in Cambodia. Accordingly, censorship is a well-known reality which is both government-orchestrated and self-censorship due to fear of violence and a culture of impunity. Thirteen journalists have been murdered since 1994.17 Heng Serei Odom, a journalist who had reported on cases of illegal logging implicating powerful and well-connected individuals, was found dead inside the trunk of his car on 11 September 2012.

Most recently, on 2 May 2014, Lay Samean, a reporter from Voice of Democracy, was beaten and left unconscious in the street after attempting to take photographs of security guards chasing a monk at a rally held by the opposition party’s supporters at Freedom Park in Phnom Penh. His vision has been permanently affected, but the Phnom Penh Municipal Court has dropped his case requesting compensation. Exercising the right to freedom of expression is thus often met with violence and impunity.

Excessive use of force against peaceful demonstrators has also been reported in several instances. Violent attacks on freedom of expression intensified in 2013 with the CNRP’s boycott of the National Assembly and post-election protests. On 15 September 2013, Mao Sok Chan, a 29 year-old father of four, was shot dead by security police while asking for an international review of the results of the National Assembly Elections. Instead of investigating the case and against the background of the deaths of several other protestors, in January 2014 the RGC decided to further restrict freedom of expression and freedom of assembly with a ban on all demonstrations. The ban was lifted only on 22 July 2014. Public gatherings are still subject to restrictions and strict control.

Despite direct or indirect government control over most media and all the de facto restrictions on freedom of expression, some space remains to freely exercise this right. The Internet represents one such space, and a central platform for activism. Classified as “partly free” by Freedom House in 2014,18 the internet in Cambodia remains relatively uncensored in comparison to traditional media. Nevertheless, efforts by the government to monitor and control the web have recently increased, making the Internet a target of the RGC’s censorship policy.

A controversial draft cybercrime law, which contains provisions that could severely restrict online freedom of expression, was leaked in April 2014 and is currently on hold, while the creation of a “Cyber War Team” to monitor the use of social media was announced in October 2014.19 Furthermore, in a very concerning move, the RGC has reportedly ordered Internet Service Providers operating in the country to disclose very sensitive information. Such a practice, if not properly regulated, would not only violate the right to privacy but also seriously threaten the rights to freedom of opinion and expression.

Freedom of expression continues to suffer severe restrictions in Cambodia, and significant challenges remain ahead to change the legislative landscape and end the pervasive culture of silence. Furthermore, De facto censorship and control of dissent need to be fought, and protection ensured to those who exercise their fundamental rights. There is much room for improvement. Some steps forward would include (i) adopting a law on access to information in the near future (ii) amending the Criminal Code on all points related to freedom of expression to bring it into line with international standards, and (iii) ensuring press freedom and equitable access to channels for the free distribution of information.

1. See Articles 31, 35 and 41 of the Constitution of the Kingdom of Cambodia; Article 19 of the Universal Declaration of Human Rights (UDHR); and Article 19 of the International Covenant on Civil and Political Rights (ICCPR).

2. Art 41 Constitution: “Khmer citizens shall have freedom of expression of their idea, freedom of information, freedom of publication and freedom of assembly. No one shall exercise these rights to infringe upon the honor of others, or to affect the good customs of society, public order and national security.”

Ms. Chak Sopheap is Executive Director of the Cambodian Center for Human Rights. She holds two Bachelor’s Degrees in International Relations and Economics and a Master’s Degree in International Peace Studies, which she completed at the International University of Japan. Until 2009 she ran the Cambodian Youth Network for Change, which mobilized young activists around the country for greater civic engagement, and she is currently a contributing author to Global Voices Online and Future Challenges.