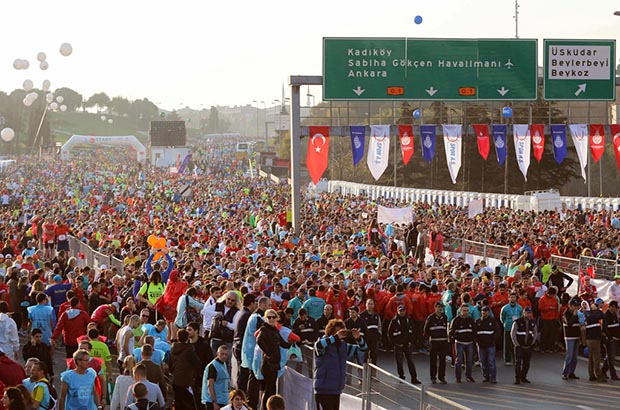 More than 100,000 people took part in the 2015 International Istanbul Marathon in Turkey on 15 November 2015, with the slogan “Say No to Violence Against Women”. Photo: UN Women/Müslüm Bayburs.

One of WACC’s four policy areas is Gender and Communication, represented this year by programs in several countries on WACC Global’s Small Projects Support list.

In Kenya, the Association of Media Women is addressing online and cyber violence against women. “There is little knowledge about how to end it because it is treated as a personal problem so individuals find a way to cope on their own. People are not aware of the consequences sharing data over the Internet has on individuals. Women journalists because of their professions as public figures became easy targets of online violence,” the association said.

The project aims to sensitize journalists to online violence against women. It will push for media policies that address cyber-attacks and online bullying and raise greater awareness of gender discrimination and inequalities in digital communication.

In Bangladesh, the activist women’s organization called Bangladesh Nari Progati Sangha will examine the content of news about violence against women from a gender sensitivity and women’s human rights perspective and raise awareness among journalists and policy-makers for more responsible reporting.

The project will monitor one week’s news coverage of five newspapers, five television stations and five online news portals to illustrate how women are presented in Bangladesh media.

Nepal’s Asmita Women’s Publishing House and Resource Organization will examine critically news on violence against women and lobby for policy change. It will also address the discourse that legitimizes violence, the lack of real knowledge by journalists, and the propaganda of violence projected in and through the media.

In Argentina, Equipo Latinoamericano de Justicia y Género seeks to improve the representation of Adolescents, taking into account a gender perspective and human rights and a critical review of how the media portray young people. The monitoring process will produce a qualitative and quantitative report distributed to mass media, journalists and institutions of public education; materials for use in workshops with young people and social media campaigns to promote journalism that respects the right of adolescents to live a life free of violence.

In Ecuador, Centro Ecuatoriano de Promoción y Acción de la Mujer will address the radio programs that call themselves “counsellors” and analyze marital and family problems, including gender violence. These programs offer advice, rituals and amulets that maintain notions of men’s dominance, women’s submission, and gender inequality. The project will create evidence in order to regulate communication spaces that jeopardize the eradication of gender-based violence and ignore international, national and consitutional conventions and laws. It will review the results of these investigations with media houses and journalists and in policy-making contexts with women’s organizations, rights groups, and the public.

Also in Ecuador, Grupo de Apoyo al Movimiento de Mujeres del Azuay intends to monitor news about the economy in order to gather data about the representation of women in the national media of Ecuador. It will assemble and disseminate the results widely in order to provoke more critical reading by citizens of media content and to reverse the invisibilization of women.

Mexico’s Comunicación e Información de la Mujer will use WACC’s methodology to monitor national news about issues of peace and security as they impact women. It will produce a report and materials for a campaign to change the working practices of journalists so that they incorporate balanced gender perspectives.

Many of WACC’s local partners need help. Some are partly supported by a donor whose funding is conditional on a second donation. WACC may be able to match, or double or even triple a contribution from another funding partner. Here is a link to the donation page.