Posted at 20:31h in Media Development by Asia Pacific Mission for Migrants 0 Comments 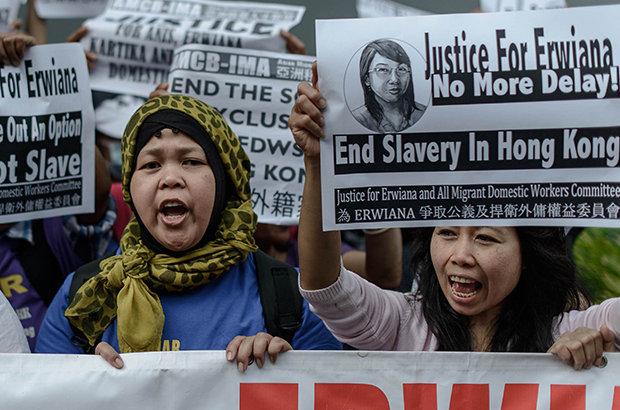 Members of a support group for Erwiana Sulistyaningsih, an Indonesian maid allegedly tortured by her Hong Kong employer, rally in her support at the court of justice in Hong Kong, April 29, 2014. Photo: SBS World News.

Freedom. Democracy. Justice. These are a few concepts that many migrants feel are alien once they land in a country that is not their own. A feeling of insecurity sets in as they navigate their immediate surroundings while trying to understand and adjust to a new culture, language and life.

At first the absence of these concepts does not matter as they − migrant workers, new immigrants or asylum seekers − are geared towards achieving their first goal: survival. But along the way, they will figure out the limited space in which they can move, the laws that they thought would protect but instead work to their disadvantage, the lack of recourse when they become distressed.

The Asia Pacific Mission for Migrants (APMM) focuses its energies on creating spaces for migrants to become re-acquainted with these concepts. We partner with migrant-serving institutions, migrants’ rights advocates and, most importantly, the grassroots migrants themselves in developing and conducting campaigns, activities and various initiatives that will be beneficial primarily to migrants as well as for all.

“Communication rights go beyond freedom of opinion and expression to include areas such as democratic media governance, media ownership and control, cultural diversity, linguistic rights, and the right to education, privacy, peaceful assembly, and self-determination. These are matters of inclusion and exclusion, of accessibility and affordability. In short, they are questions of human dignity.”

By this definition, one understands the reality by which individual and collective rights of peoples are restricted and/or violated despite the existence of international conventions and laws that should ensure the protection of those rights.

In our work with migrants, we know this reality is true. While migrants are allowed to enter a country, their freedoms as well as their rights are limited. Migrant-related laws do not offer protection but rather make migrants more vulnerable to abuse, harm and exploitation. Places of refuge are scarce and a culture of discrimination and racism is fanned and promoted quite systematically.

Promoting the communication rights of migrants

The APMM has been resilient in promoting the communication rights of migrants. In cooperation with the World Association for Christian Communication (WACC), we have launched campaigns and activities that actively engaged grassroots migrants, migrants’ rights advocates and service providers on the significance of communication rights in the overall campaign for the recognition, upholding and protection of the rights, welfare and dignity of migrants and their families.

When we conducted the Asia Pacific Conference on Alternative Radio Journalism and the Advancement of Migrants’ Rights and Welfare in Hong Kong in June 2012, we gathered 60 grassroots migrants, media practitioners, migrant service providers and social activists from NGOs and faith-based communities from ten countries and country regions to share experiences on migrants’ rights advocacy through alternative radio journalism and explore ways to utilize alternative media for the promotion of rights and welfare of migrants.

It was a fruitful two-day conference that resulted in a relatively comprehensive view of the current conditions of those working in alternative media and how similar their situation is to that of migrant workers. Media repression and censorship are just as cruel as repression and violation of rights of migrants, yet both sectors continue to struggle against these barriers and steadfastly stand their ground.

The conference produced outcomes that all participants pledged to accomplish and work on in cooperation with one another. They included: 1) creation of online connections such as e-groups to ensure continued communication among participants; 2) development of a loose network of media practitioners, both mainstream and alternative, migrant leaders, and social activists to facilitate the achievement of set goals as well as communication should new initiatives come up; and 3) conducting campaign plans focusing on specific migrant concerns, such as migrants in jail, undocumented migrants, death row, debt bondage, among others.

It is very interesting and inspiring to note that, as of this writing, this cooperation continues to exist. The conference created the opportunity for migrants to establish connections and relations with other sections of society, which not only won them allies in their cause but also enabled them to re-acquaint themselves with skills and knowledge that may have lain dormant and that have now become crucial in their organizing, advocacy and campaign work. The conference also helped APMM to develop its skills in radio broadcasting.

Nonetheless, we in APMM and the migrants learned a lot from this experience. We saw the value of grabbing every opportunity for migrants not only to know about their communication rights but to practice them as well. From conferences we organize to actual radio programs and media endeavours where migrants can actively participate, this adds to the empowerment of migrants.

Other initiatives we undertook in promoting communication rights of and for migrants included encouraging them to write their life stories (to be published in books and circulated publicly), creating a campaign toolkit for foreign domestic workers (in terms of promoting their rights in the frame of promoting the ILO Convention on Domestic Workers), conducting regional and local workshops on citizen journalism, and currently, making downloadable audio files on migrants’ concerns.

Migrants remain at the core of our activities. They are and continue to be our partners, beneficiaries and major stakeholders. How, then, do we measure the extent and breadth of our initiatives in relation to the attainment of the overall political, social and cultural rights of migrants?

For those who don’t know her, Erwiana Sulistyaningsih is an Indonesian domestic worker who suffered through seven months of physical abuse and labour exploitation at the hands of her Hong Kong employer before being sent back to Indonesia. The picture taken of her by a fellow Indonesian domestic worker who then posted this photo on social networks went viral online causing migrant organizations and service institutions in Hong Kong to take up her case.

As the photo provoked sympathy and outrage over the cruelty that Erwiana experienced, it also led to a concerted effort on the part of grassroots migrant workers’ organizations of Indonesians and of various nationalities, migrant-serving institutions, regional migrant platforms like the APMM as well as human rights organizations, lawyers’ groups and other advocates in Indonesia to give Erwiana the justice she rightly deserves.

These groups included the Indonesian Migrant Workers’ Union (IMWU-HK), Asosiasi Buruh Migran Indonesia (ATKI-HK), Mission for Migrant Workers (MFMW) and the United Filipinos in Hong Kong (UNIFIL-HK), all of whom attended the 2012 alternative radio journalism conference and were at that time actively engaged in their respective digital radio programs.

In cooperation with other groups and institutions in Hong Kong, they formed the Justice for Erwiana, Justice for All Migrant Domestic Workers campaign, a loose network focusing on bringing Erwiana’s employer to court and for Erwiana to seek justice.

The campaign they developed was both online and offline, both inside and outside the court. They created a Facebook page and welcomed organizations and individuals who wanted to participate in the campaign. They popularized hashtags as well as slogans that could be used on social networks as well as in protest actions and demonstrations that they were initiating. As soon as it went online, the campaign attracted international attention and support.

Indifference and apathy in Hong Kong were replaced by a growing number of people in Hong Kong, both migrant and local, and in other parts of the world joining in what has since become an international call to give justice to Erwiana. Any ordinary citizen, by what they see online, could identify themselves with Erwiana and understand the importance of their involvement in the campaign. And the rest, as we say, is history.

After winning her case, Erwiana decided not to go home quietly. She committed to pursuing her education in order to help fellow migrant workers. As she does this, she continues to be involved in the migrant movement both in Indonesia and in Hong Kong. She keeps in constant touch with us and her friends in Hong Kong and has participated in many of APMM’s activities, the most recent of which were the Regional Migrants’ Workshop on Citizen Journalism and Digital Technology (held in Malaysia in April 2015) and the Churches Witnessing With Migrants (CWWM) Conference as part of a parallel event to the Global Forum on Migration and Development (GFMD) (held in Istanbul in October 2015).

It is very empowering for us in APMM to see how one victim is transformed into a defender of human rights and an active participant in effecting change in society. Though this could be perceived as coming full circle, for us it is an endless upward spiral of empowerment. Erwiana will lead to more empowered individuals who can contribute more effectively and engage without fear in society.

Continued efforts to pursue communication rights for migrants and untiring cooperation initiatives with migrants themselves will multiply from a small number of migrants with know-how, appreciation and practice of communication rights to hundreds and thousands of empowered, engaged and involved migrants.

By putting communication rights within a campaign framework, we are able to sustain activity after activity and build on their strengths, weaknesses and lessons so that we can do better in future. And in all these initiatives, migrants remain at the centre.