Posted at 20:29h in Media Development by wacc_kn 0 Comments 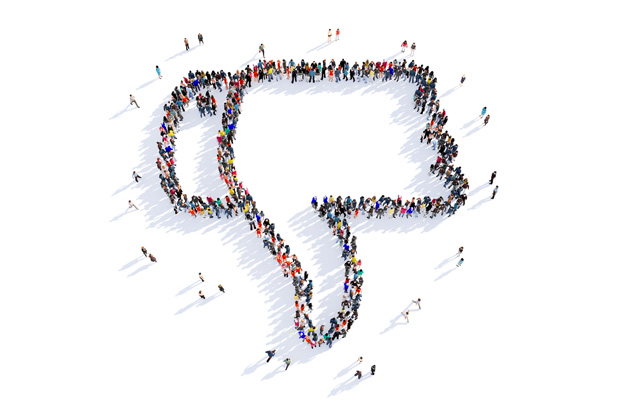 When first created, the internet and social media were thought to be places where the Habermasian idea of the public sphere (places in which rational debate and logic would win out in order to bring about true democratic reform) would finally be realized. However, time has shown this not to be the case and social media is often blamed for causing increased polarization, harassment, and flaming.

A common trope in all of these instances, however, is that it is people who are to blame and the networks themselves are viewed as somewhat neutral. In fact, when Facebook became the target of blame in the 2016 Presidential election in the United States, Zuckerberg denied that the site had any complicity in the spreading of fake news. Despite such negative aspects, however, there is much room for hope that these spaces could, if designed properly, work to foster intelligent, rational, and respectful dialogue that help shape the future of political discourse.

The point of this article is not to focus on the common discourses about the ways in which people behave online may lead to increased polarization and decreased activism or political involvement, but instead to examine the ways in which the network logics of the platform affect the types of engagement that are fostered in these environments. The lack of cross-party dialogue is troubling, but what is potentially even more discouraging is the fact that even within like-minded groups, true rational discourse rarely happens.

This essentially eliminates one of the biggest advantages of heterotopic spaces, the ability for groups to coalesce their views. Through looking at a case study of recent online debate in the case of the changes to the Philadelphia Gay Pride Flag, this article will examine the way that the platform design of Facebook limits the amount of true discourse that is able to occur including: the way discussion threads are displayed, the (lack-of) barriers to interacting, and the proliferation of “click-bait-y” titles.

As a quick background to what prompted these dialogues to begin to occur, in 2017 the Philadelphia Pride association in conjunction with city officials decided to add a black and a brown stripe to the iconic rainbow flag as part of their “More Color More Pride” campaign. The campaign was designed to draw attention to the historical lack of representation and inclusion of People of Color (POC) with the Lesbian, Gay, Bisexual, Transgender, and Queer Plus (LGBTQ+) community.

The main goal of this program, according to their website, was “to fuel this important conversation.”1 While this definitely acted as kindling for a discussion that occurred, I imagine it was not the one that the founders of the campaign had envisioned or hoped. Instead of rational, progressive, and collaborative discussions, what often resulted was a cyclical argument in which there was little progression in any viewpoints.

When entering into a lengthy conversation on Facebook, it is common to look like this (see Image 1 on following page). At first glance, this seems to be a fairly productive conversation. The initial post is discussing the fact that most of the individuals who had been vocally against the change to the flag were not people of colour (POC) and then in the discussion there are POC (or friends of) who are expressing their opinions. The issue, here, is the fact that this is what the average person would see before contributing to the conversation, which has already been in progress for a while (almost 12 hours and 28 posts to be exact). 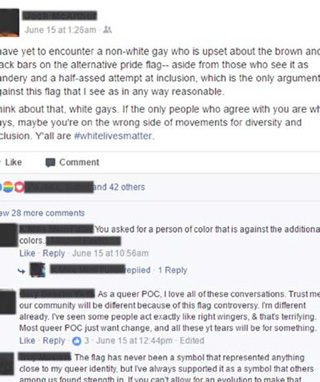 When expanded out, it becomes clear that there already have been POC voicing their opinions and rebuttals to those opinions that have moved the conversation past the initial posting, with the principal poster even making some adjustments to his phrasing to clarify his views and thoughts on this issue. Someone who was to engage with the conversation now is only required to view the posts that are publicly visible (which changes for each person based on their own friends on the site) and there is no requirement to actually engage in the entirety of the discussion.

It is here that immediacy seems to be prioritized over comprehension and thoroughness. What could be a major benefit of online discourse, namely that one does not need to engage immediately and can take the time to thoroughly understand what is being said, is completely gone and almost becomes burdensome (if even noticed at all). When one chooses to view previous posts, it does not go to the beginning, but rather expands the discussion to include a few more of the “most recent” posts. For a lengthy discussion that (on public forums) can be well into the 100s of posts, to scroll up to the top and read all of the posts becomes problematic and time consuming. It is much easier to just post your opinion based on the information readily available to you, and then continue scrolling on.

Once you reply to a posting, other individuals have the ability to respond to you – and you become notified of these posts, as well as anyone else who posts within that thread, mostly. The one exception is that the notifications only occur when someone responds to the general post or to your specific post. If you write a response and someone responds to you in the general discussion thread you will not receive any notifications of people who respond directly to that new post. While most likely done in order to decrease notifications in a situation that can already become overwhelming, what ultimately happens is a fracturing of the conversation into many smaller conversations.

This drawback ultimately loses another advantage of large discussion threads in social media – which is the number of opinions that can enter in and ideally work out their differences together, much as Habermas had theorized would happen in the public sphere. Instead, the end result ends up replicating a conversation that would happen “in real life” in which only a small group of people can actually speak and engage at any time. This begins to limit opinions and the exchange of ideas that are essential to bringing about social change – especially for marginalized communities who are often easily excluded from certain conversations.

Another common way that discussions are shared through Facebook is through the sharing of articles, which came under much scrutiny during the 2016 United States Presidential Election because of the proliferation of “fake news” that was being shared. The focus of this article is not that, but rather the engagement that occurs with news stories, particularly in regard to two aspects. The first is the proliferation of “click-bate-y” titles, and the second (and more troublesome) is the fact that many people do not read the articles before commenting.

With the copious amount of news articles being shared on social media, many news organizations are now finding themselves competing for attention more than ever in the past. Because of this (and the fast nature at which people scroll through Facebook), news outlets are forced to vie for the attention of their audience by promoting titles that are somewhat inflammatory in order to get individuals to view them. While these titles tend to be a bit more extreme than the articles themselves, another issue that results is that many times individuals will form (and share) their comments just based on the headline without the context of the article. This eliminates one of the other advantages of online discourse, which is the ability to be fully informed before forming and voicing your opinion.

At the same time that the articles about the Pride Flag were circulating, another article from the Huffington Post entitled, “An Open Letter To Gay, White Men: No, You’re Not Allowed To Have A Racial Preference” began to circulate. Towards the end of the article, the author concluded that one does not need to be attracted to everyone, but if the main (or sole) reason you are not attracted to someone is because of their race then it is racist.

The author, a queer POC, even predicts much of the resistance that the article will receive, such as “people like what they like” and it is similar to any other type of preference. Despite spelling out counterarguments to each of these (and many others) the comments in the discussion threads followed the very same logic that the author was disputing – without acknowledgement that these arguments had been addressed within the article.

It is true that Facebook was not designed specifically to be a space to foster intelligent, political discourse. However, it has morphed into the most popular social media site for individuals to get their news, with 44% of US adults stating that they get their news from Facebook.2 Because of the prevalence of the individuals who share and receive news through Facebook, it can no longer claim that the platform is “apolitical,” nor can just attempting to weed out “fake news” be considered an appropriate solution. Through this article, I have attempted to demonstrate three ways in which the platform of Facebook and the network logics that are built into it actually shift, shape, and stifle truly open discourse – it is not just a problem with how individuals use the site.

There is likely a gain from having individuals scroll through their newsfeeds rapidly – the more posts a person looks at, the more advertisements they are likely to see, which ultimately benefits Mark Zuckerberg’s pocketbook. Facebook’s mission statement is to “give people the power to build community and bring the world closer together”. However, they are not doing this in a meaningful and productive way, but rather merely in a way that values quantity of interactions over quality.

Despite all of the negatives in these posts, there were people who were clearly begging for the kind of rich and powerful dialogue that I have been suggesting is possible (e.g. see the final comment in Image 2 on the previous page). This shows that there are people who wish to use these sites and venues to have fruitful conversations – especially when it is in a safe group in which you can work to refine your positions without always having to face stark opposition.

There are simple things that could be done to the platform as well in order to help promote and encourage these discussions. Just by switching around the order that comments are displayed and requiring a user to scroll to the end, Facebook could help to reduce the circularity of these discussions by promoting the notion that individuals should understand what is being debated.

Second, if Facebook were to provide an easier way to follow discussions that you are already part of, it would be easier to stay engaged and be exposed to new information and points of view – perhaps through a tab that allowed you to follow and stay engaged in all topics that you have posted on or “liked.” Finally, Facebook could make it easier (or even mandatory) to read an article before commenting on it.

While these suggestions would not solve the issue of the tumultuous nature of online discourse, they would help to provide people with a tool that encouraged open and engaging discussion rather than one that is merely attempting to have the highest number of people engage with the highest number of posts. People want social change and social media have the potential to be an excellent platform to get these discussions started. But not the way the platforms are currently designed. ν

Patrick M. Johnson, M.A. is a PhD Candidate in Journalism and Mass Communication at the University of Colorado Boulder, USA.