Enabling migrants and refugees to speak for themselves
21177
post-template-default,single,single-post,postid-21177,single-format-standard,theme-bridge,bridge-core-3.0.1,woocommerce-no-js,qodef-qi--no-touch,qi-addons-for-elementor-1.5.6,qode-page-transition-enabled,ajax_fade,page_not_loaded,,qode-title-hidden,columns-4,qode-child-theme-ver-1.0.0,qode-theme-ver-29.2,qode-theme-bridge,qode_header_in_grid,qode-wpml-enabled,wpb-js-composer js-comp-ver-6.10.0,vc_responsive,elementor-default,elementor-kit-41156 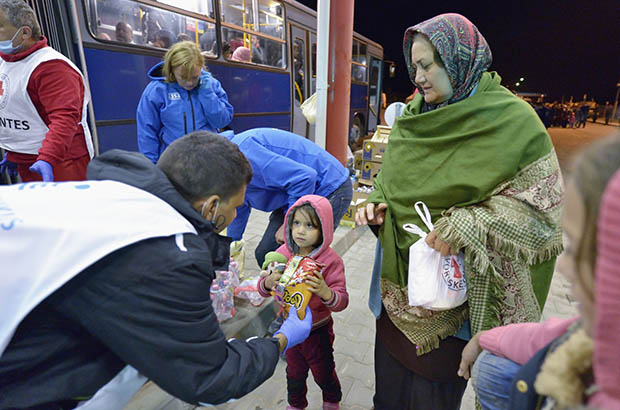 16 Dec 2017 Enabling migrants and refugees to speak for themselves

News media the world over have been covering refugees, migrants, and internally displaced people, but the nature of that coverage often raises questions.

On International Migrants Day 2017, WACC calls on communicators everywhere to amplify the voices of migrants, refugees, and internally displaced people so that they can live in dignity, security, and peace.

The report was the focus of a later discussion with media representatives co-organized with One World Media and the British Red Cross, focusing on the lack of direct representation of refugees and migrants in the media, terminology, diversity in the newsroom, and the importance of having a migration expert within the newsroom.

Participants agreed that when stories are told directly by those involved and most affected, they are more accurate and powerful and better able to reach the public and impact debate and decisions.

As the Ethical Journalism Network (EJN) underlined in Moving Stories: International Review of How Media Cover Migration, “Decision makers pay attention to the media, and independent journalists reporting with care, humanity and professionalism have enormous power to tell stories that create a new path.”

However, while mainstream media are still adapting to new communication scenarios and the impact of digital technologies, media outlets, NGOs and refugee groups need to find better ways to collaborate, build trust and good working relationships with each other.

In today’s world, under pressure from globalization and advances in communications and transportation, the number of people who have the desire and the capacity to move to other places has greatly increased.

And so too has the number of conflict situations and natural disasters that have forced large populations to move, raising issues around basic survival, health care, employment and education.

Yet, too often migrants, particularly women and girls, remain invisible. Many migrant women are discriminated against because their journey was outside official regulations and undertaken under precarious conditions.

They may take on informal jobs, such as care and domestic work, which are essential to the functioning of a country’s economy, yet tend to be low-paid, receive little or no legal protection, and are often done in unsafe conditions.

Domestic work, in particular, is hard to regulate, making access to visas and official protection difficult for migrant women and leaving them at further risk of physical and sexual violence at the hands of unscrupulous agencies, recruiters, or employers.

The role of the news media is crucial to presenting accurate information, which in many respects can only be obtained by amplifying the voices of migrants and refugees themselves.

As EJN’s “Moving Stories” underlines, “The role of media is thus more important than ever: building upon the already existing good practices, it should strive to always provide accurate information that allows for a factual and balanced debate. To achieve this, migrants and refugees need to speak for themselves.”

Photo above: Staff from ACT Alliance member Hungarian Interchurch Aid offer food to a young refugee at Beremend, along Hungary’s border with Croatia. Hundreds of thousands of refugees and migrants flowed through Hungary in 2015 on their way to western Europe from Syria, Iraq and other countries. By Paul Jeffrey