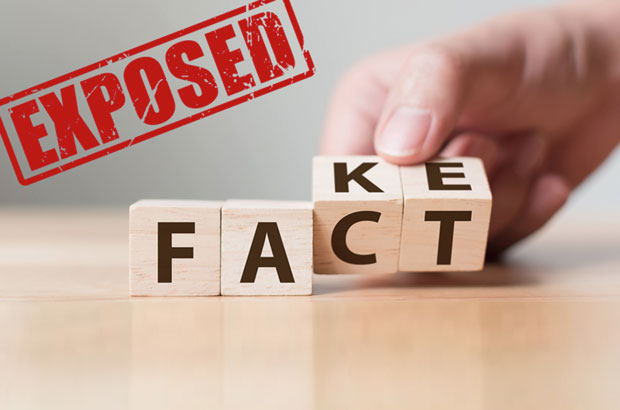 America is addicted to fake news. What “appears” to be a new phenomenon and social concern influenced by the pervasiveness of social media, is actually deeply engrained in the American psyche and political, media, social and religious landscape since the founding of the country.

The church in America may also be equally indicted in this addiction. From the sordid battle of words during the 1800 presidential campaign between John Adams and Thomas Jefferson, to the precipitation of the Spanish-American War through yellow journalism in the late 1890s, and today, internal and external forces attempting to sway elections, fake news is on the verge of or may have already trumped truth.

Don’t tell readers what they need to know, tell them what you want them to know. Some call it persuasion, others propaganda. Or different points of view and perspectives, alternate facts, the list goes on. There is nothing new about that.

American journalism has a rich history of jumping back and forth across the line between bias and accuracy. In the same town an afternoon newspaper might peddle the conservative viewpoint while the morning paper might serve up a more liberal viewpoint.

For the discerning reader this may mean subscribing to both newspapers to find out if the glass is half full or half empty and of what significance that may be.

Democracy is built on differing views respecting one another and coming to agreement.

During the 1950s, 1960s and up to the present day, radio and television a plethora of preachers have not only preached the Word, but many have also mixed the Gospel with Patriotism and turned the church into a political battle ground. What is different today?

Social media
At the outset the age of social media unleashed the opportunity for all voices to be heard, which is supposed to be good. But it hasn’t turned out that way.

Expectations that the voiceless might find a voice and the church may find new ways to speak to power, have been eclipsed by the onslaught of incendiary content.

Social media’s intensity, their nearly omnipotent presence in society, and the ability for every opinion under the sun to be offered has created a playground for stealthy messaging, voices hidden in the shadows and verbal assaults with the assailant able to hide.

Platforms such as Twitter and Facebook along with Internet trolling have become cafeteria food fights where truth is buried beneath alternate realities, distortions, racist commentary and, more simply put, lies and bullying. Serious journalism and factual reporting are replaced with feelings. Often passionate feelings.

Unfortunately, the promise of social media has ushered in the age of the weaponization of information at new and monumental levels.

Today’s post-information age has run into a headwind of information leading to more confusion rather than clarity as was hoped.

There is less evidence instead of more evidence, less understanding and more prejudice. Discernment and accuracy are passé.

For the church, the time-honoured process of discernment, second only to the need for community and fellowship, has flipped to Christ’s followers being attracted to information weapons.

In the world of social media reactions to news come in seconds. Truth is irrelevant. The cat is out of the bag and let it go where it may. Whoever can pluck a response fastest on their smartphone wins the war of words, influence and ideas, for that round.

Truth has become expendable
In the U.S. the two primary political parties have ingloriously adapted the strategy that truth is expendable. Winning is all that matters. And this is nothing new, except perhaps for the degree and intensity of emotions.

Despite a long history of electoral mudslinging, once the election is won or lost the hope for political compromise and doing what is best for the country lay on the horizon.

Today, these qualities appear to have been suspended.

In one corner is President Donald Trump who has repeatedly said most, if not all media, except Fox News, is fake news. He adds, the media are the “enemy of the people”.

In the other corner is The Washington Post newspaper and other fact checking organizations documenting the number of lies, misleading claims, exaggerations, and distortions Trump delivers on a daily basis.

As of late November 2018, a few months before Trump completed two years in office, the Post counted nearly 6,500 false and misleading claims on the part of Trump from the day he entered office in January 2017.

Trump counters that the Post is nothing but fake news, so it doesn’t really matter. Case closed.

Closing down the free press, or at least a perceived unfriendly press, is a primary building block for authoritarian rule around the world. For the United States this sort of move is antithetical to its core values, as alien as a Star Trek Andorian.

In the middle are readers wondering what is true and not true. Long trusted resources are held with suspicion often with no evidence they are distrustful. And when these institutions are collectively discredited through a broad brush stroke of hatred and bitterness a void is created.

While there has always been an acrimonious relationships between the press and sitting presidents, none have referred to the media en masse, as the enemy of the people. The exclusion goes to certain news outlets speaking highly of the leadership.

Is it new that news is now relative?
What is new is that the majority of Americans receive their news from online sources, social media hubs and read usually while on the run. Should a fake news hit first, it will take time to undo the damage. For that sites such as Snopes and FactCheck.org have emerged to separate the wheat from chaff. Often their good work is too late. Heads have already been turned, opinions shaped and emotions sparked.

In Gallup polls done after the 2016 election, more than 60% of Americans say they can identify fake news. Yet, another 25% say they have knowingly shared fake news.

There is little exclusivity in who is creating fake news. While the commonly held belief is that right-wing fringe groups are responsible, ironically, there is a liberal based website creating satirical false narratives, even stating the narratives are false. Right wing pundits, however, latch on to this “counter fake news” and release it as real news… or perhaps “real” fake news.

Everyone is scoring points. The liberals are making fools out of the conservatives. And the conservations are swaying public opinion their way. And all are well aware it is fake. And most are making good money at it.

The era of fake news has found church congregations struggling to find ways for parishioners to discern the fake from the real while finding a new path for speaking truth not only to power, but to each other.

And not unlike the world at large fake news polarizes congregations and tears at the fabric of fellowship and community.

“Truth has become individualized,” said Benjamin KL Simon of the Ecumenical Institute of the World Council of Churches in the Kairos journal. Simon was addressing fake news and Christian freedom.

That individualization has led to entertaining behaviour that was once deemed unacceptable becoming the norm.

What has been the church response to fake news and the impact it has had on communities?

From the Pope through the local pastors the issue of fake news in being addressed, although the efforts are to some degree nascent, and perhaps behind the curve and not direct enough.

Pope Francis wants the Catholic Church to promote “professional journalism which always seeks the truth”. That is good. But how?

The Catholic church has begun to train church communicators on how to identify what is fake and what isn’t. But, according to polls a majority of people say they can already identify fake news.

In a sermon at the Lutheran church in Washington state, the pastor urged her congregation to recognize that fake news is not all that different from, well, church gossip. It can be hurtful. That is a good starting place.

In American evangelical churches training materials are pointing toward the fact that the church has the ultimate truth. That message is, of course, salvation and redemption. In America a sizable percentage of Trump’s support comes from the evangelical church.

Fake news is an addiction.
The proliferation of fake news means truth is cast aside. And when truth is gone, trust disappears.

“Facts are tied to trust,” Lee Rainie, director of Internet, Science and Technology Research at the Pew Research Center said. “Trust is what binds people together.”

In a report on public views related to facts and trust after the 2016 U.S. election, Rainie says that trust means overcoming uncertainty and vulnerability and cementing interdependence to achieve collective action. Facts are the atomic unit of truth, drive outcomes for individuals and societies, underlie justice and are democratic.

During the administration of Barack Obama, Trump and the birther movement kept alive the lingering doubt that Obama was born in the U.S., despite the irrefutable evidence of a birth certificate from Hawai’i where Obama was in fact born.

Was it that Trump actually believed his own lies? It is hard to say what he and his other partners really believed. The truth was no longer as important as the “new” fact, and the fanning of the fire to discredit truth.

For the Jefferson/Adams presidential campaign of 1800, party line newspapers and politicians at the time tossed around rumours, lies and innuendo, even hiring “hatchet men” to denounce the other.

The yellow journalism of the 1890s was in actuality a circulation competition between publishers Joseph Pulitzer and William Randolph Hearst. The facts be damned, many articles came with little or no research done, emphasizing exaggerations, fear-mongering and sensationalism.

Does that sound a bit like the Fake News of today?

Except the Pulitzer/Hearst approach to increasing circulation swayed the American population to back rebels in Cuba battling Spain, eventually leading to U.S. involvement. The impact of Fake News in 1898 on the war is indisputable.

Great headlines and sensational stories sold lots of newspapers for the two publishers.

Loss of trust
Much in fake news today is meant to deflect readers from the truth. It is not only an assault on facts, but filled with personal attacks on others. Who is willing to trust a person with dubious yet unproven credentials?

The story of fake news runs parallel with the unbridled nature of social media. Hatred bombs can be lobbed into the public square causing panic, fear and distrust.

Gallop and Pew Research surveys following the 2016 election showed that Americans trust in everything from the government to the church plummeted in the decades following World War II and today are at their lowest points in history. In the 1960s more than 70% of population reflected strong trust in government, church, media, education systems, and other crucial institutions.

Can this all be blamed on social media?

Social media are meant to be a personal experience, but they are also able to destroy the person. The exact thing the church is meant to build up, fake news is tearing down, the individual who God created.

The tide of fake news coming through social media is so quick there is little time to do as the folks at FactCheck.org suggest: consider the source, read behind the headline, check the author, what’s the support, check the date, is this some kind of joke, check your biases and consult experts.

At the end of the day Abraham Lincoln may have a message a hundred and fifty years too late, “Let the people know the facts, and the country will be safe.”