Gender and peace after 2015
20712
post-template-default,single,single-post,postid-20712,single-format-standard,theme-bridge,bridge-core-3.0.1,woocommerce-no-js,qodef-qi--no-touch,qi-addons-for-elementor-1.5.3,qode-page-transition-enabled,ajax_fade,page_not_loaded,,qode-title-hidden,columns-4,qode-child-theme-ver-1.0.0,qode-theme-ver-28.6,qode-theme-bridge,qode_header_in_grid,qode-wpml-enabled,wpb-js-composer js-comp-ver-6.9.0,vc_responsive,elementor-default,elementor-kit-41156

Posted at 12:56h in Media Development by Valentina Baú 0 Comments 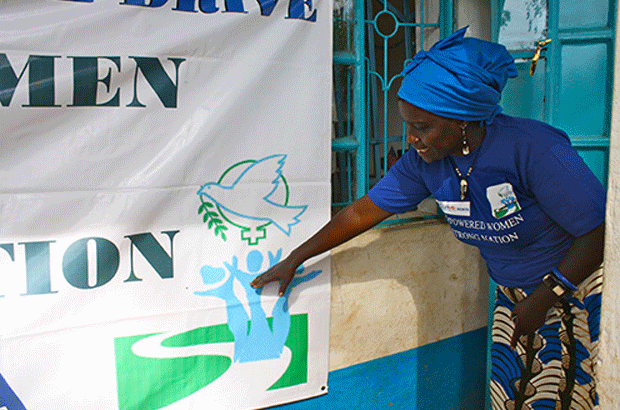 The Millennium Development Goals (MDGs) have represented a crucial framework in international development since their establishment in the year 2000. Two of their key strengths have been their ability to articulate complex development challenges in eight clear goals (while, at the same time, offering indicators for their measurement) and that of shifting the public focus on critical global issues.

Not only has this successfully raised awareness about nd drawn enormous attention to problems that had until then been often neglected by donors in the North, but it has also succeeded in generating a commitment from governments in the Global South, whose accountability in the achievement of the goals is seen as an important component.

While Goal 3 is one that explicitly refers to gender (“Promote gender equality and empower women”, mainly in relation to literacy and education), it has been recognised that one of the shortcomings of the MDGs is their overall lack of a clear gender dimension. Even with the inclusion in Goal 5 of another issue that is high on women’s rights agenda (“Improve maternal health”) it can be said that there is no clear reference to gender equality across the spectrum, and to how it should be achieved.

A strong argument1 has been that the application of a human rights-based approach to the implementation of the Goals would have allowed for the enforcement of processes that are based on equality; for the prioritisation of marginalised and vulnerable communities; and for the participation of all groups in the design of development strategies.

The failure to integrate human rights standards in the MDGs has led to an unequal type of development, which does not take into account all segments of the population. Indigenous people, for example, are not mentioned in any of the Goals; and how or whether these have benefitted indigenous women in particular is yet to be clarified.

Another missing element in the MDGs is that of conflict and state fragility. Peace and development are also interlinked, and the prevention of conflict (and how to address it in a way that is inclusive) should be a major commitment to take on within a global development framework.

The issue with post-conflict realities

Since 2001, shortly after the establishment of the MDGs and their launch at the global level, the course of conflicts has begun to take a catastrophic direction. From the US-led wars in Iraq and Afghanistan, and the multitude of civil conflicts in the African region, the environment in which the Goals were conceived has changed.

Further social and economic problems have affected the already poor countries of the world, and brought about unforeseen circumstances in the implementation of the MDGs. One among them is the situation that takes shape for both men and women in countries affected by large-scale violence, particularly after the end of the armed fighting. It is in this scenario that the consequences of the absence of a valid gender dimension become more visible.

The under-representation of women and their lack of voice in processes of peace-building and reconstruction in the aftermath of conflict is deeply concerning. Not only do women represent a large amount of the population in conflict-affected areas, but they also make up a large share of the potential victims of the conflict. Their exclusion violates their human rights and makes them subject of discrimination.

Reconstruction is a complex process for which most government institutions are unprepared. In the struggle to reconstruct themselves, these institutions pay little attention to gender as an element of peace-building, and pre-existing structures characterised by male-dominance are perpetuated. Moreover, the significance of women’s contribution to peace is seldom understood and nurtured.

What needs to be fostered is the opportunity for social change that comes with the reconstruction process, and to assign women a more prominent role in the various activities that are in place. Through points 2 and 3 of its 2013 Declaration, the Peace-building Commission of the UN General Assembly Security Council has affirmed the significance of committing to:

“Emphasis[ing] the importance of sustaining political momentum behind ongoing peace-building processes, promoting gender equality and promoting and protecting the human rights of women”;

“Underlin[ing] the critical role of women in preventing conflicts and supporting, participating in and carrying out peace-building initiatives and post-conflict reconstruction, as well as actively working towards post-conflict economic recovery”.

Another important angle that needs to be applied to a discussion on gender in post-conflict contexts is one that recognises gender as concept that involves both men and women, and how they relate to one another. This perspective allows us to regard both men and women as victims, perpetrators, and supporter of the violence, while at the same time bringing to light their contribution to peace.2

It also makes it possible to address issues of masculinities and male vulnerabilities that are key in the achievement of a sustainable peace, and to recognise that women can participate actively in the conflict too. This “relational” approach clarifies “how people’s responses to violent conflict are shaped by their gender identity, and thus provides clues as to how such responses can be modified”.3 Finally, it is a useful framework in which future policies and recommendations on gender and peace-building should be formulated.

Gender-based inequalities in education, health and political representation around the world are still persistent. One of the questions that have been raised in the post-2015 debate is not only whether or not a goal on gender is realistic, but how effectively we can continue to mainstream gender issues into broader policies.

Some argue that offering guidance for gender mainstreaming will not work, as context-specific circumstances affect individual countries. The issue of whether or not we should move towards a universal agenda that is more detailed and encompassing is therefore at stake.

The other challenge involves gaining the political commitment of national governments to adopt gender-sensitive indicators and at the same time to release sex-disaggregated data. Measuring gender-responsiveness is a complex process, but one that we need to master if we wish to continue focusing on progress. In an interview with the Guardian, Deputy Director of UN Women John Hendra observed:

“The things that are difficult to measure are often the most important. If we are going to move towards a more transformative agenda there is a dichotomy we have to address: many say the MDGs are easy to measure but they don’t really address the deep-seated challenges that communities and societies face. To do that we have to … focus on getting baselines in place by January 2016, and the best we can do as a broad development community in measuring the most difficult areas. … We need to be able to much better track where programmes resources go in terms of targeting gender equality and involving women.”

In addition to that, in order to advocate for the inclusion of a specific dimension of gender and conflict in the post-2015 framework, we need to make evident the connection between peace, security, good governance and economic recovery on one side, and women’s empowerment and gender equality on the other side. While data on the social and political situation of women are already weak at the global level, they become even scarcer in conflict-affected contexts.

In the debate surrounding the inclusion (or exclusion) of a peace and security goal in the post-2015 agenda, as explained in a UN Women Peace and Security Report, no specific attention has been paid to how men and women experience conflict differently. In particular, the report highlights how the choice of violent deaths as an indicator for conflict fails to incorporate a gender perspective. Sexual violence is, in fact, not inescapably lethal, and yet represents one of the most violent forms of warfare. It also overlooks other forms of violence women endure during conflict, such as mass rape, starvation and displacement.

At the same time, the African Women’s Steering Committee on Post-2015 Agenda, comprising a number of different national and international organisations operating in the African region, has highlighted how the new framework must advocate for the implementation of “gender parity laws in existing regional and international commitments by ensuring an enabling environment for women in order to realise equal participation, representation and inclusion in decision-making, leadership, governance, peace building and post-conflict reconstruction processes.”

Another important point raised by the Committee is to “[s]trengthen and consolidate women’s participation, skills and expertise in all forms of the media and to eliminate media coverage that condones gender stereotyping and myths by redressing relevant laws on freedom of information and communication”.

As the previous paragraph has reminded us, media and communication have an important and active role to play when it comes to promoting gender equality and communicating women’s rights. Yet, their impact is often neglected, with little resources being allocated to their use. This is also clearly marked through their absence from the MDG framework.

The issue with media and communication is that they are seldom regarded as a distinct, significant, strategic area. Most agencies still conceive their function as naturally intertwined with some of their programme’s activities, not requiring a specialised and context-specific design. Conversely, media and communication channels should be developed through accurate research on the context they are being applied to, considering its cultural, social, political and technological environment. This is particularly important in post-conflict realities, where the need for accurate information and for the dissemination of a message of peace is central.

From a mainstream media perspective, gender equality in peace-building can be promoted by portraying the truthful role that women can (or do) play in the reconstruction process. Broadcasting women’s voices and concerns, showing their involvement in peace-related activities, and highlighting their contribution to peace at the household level is helpful in achieving a progressive change in society’s mindset on the significance of their inclusion.

From a communication perspective, providing a safe space where both men and women can talk about their experience of the violence, creating opportunities for dialogue between opposing groups of the same gender, and allowing for an exchange of reflections among opposite genders is useful in creating an environment that is conducive to peace. At the same time, the use of both new and traditional technologies can be tailored to create platforms for men and women to share their stories, identify a possible way forward, and begin to heal.

While these are only some of the benefits that a communication approach can bring to gender and peace, we need to recognise that a successful post-2015 agenda will be one that not simply takes into account the complexity of post-conflict realities, but that also acknowledges the different experiences and assets of those who have endured violence, and uses the media and communication for positive change.