Gender equality: Some progress, but still a long way to go
23523
post-template-default,single,single-post,postid-23523,single-format-standard,theme-bridge,bridge-core-3.0.1,woocommerce-no-js,qodef-qi--no-touch,qi-addons-for-elementor-1.5.6,qode-page-transition-enabled,ajax_fade,page_not_loaded,,qode-title-hidden,columns-4,qode-child-theme-ver-1.0.0,qode-theme-ver-29.2,qode-theme-bridge,qode_header_in_grid,qode-wpml-enabled,wpb-js-composer js-comp-ver-6.10.0,vc_responsive,elementor-default,elementor-kit-41156 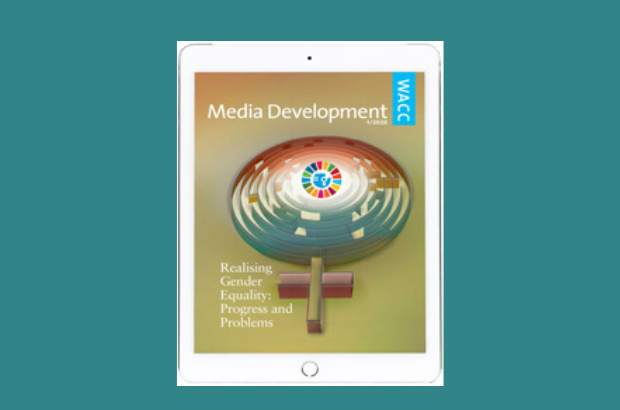 03 Mar 2020 Gender equality: Some progress, but still a long way to go

WACC Global’s quarterly journal, Media Development, has published its first issue of the year, which examines how women around the world are faring 25 years after the Beijing Declaration and Platform for Action, and five years since the launch of the UN’s Sustainable Development Goals.

Published in time for International Women’s Day 2020, and its theme “An equal world is an enabled world”, this issue asks how and media can help forge a gender equal world.

The issue, Realising Gender Equality: Progress and Problems, tackles gender equality from different angles – how women are represented in the news media, the effect of rising authoritarianism and right wing populism on women and other marginalised communities, gender policies in communication, among other things.

“While extreme poverty indicators have indicated improvement in recent years, millions of women, girls, transgender and gender non-confirming people remain stuck in poverty with unequal access to public services and little hope of change in the face of policies that fail to address the structures underlying poverty and inequality,” writes Anna Turley in the article, Feminist digital organizing to transform a world in crisis. Turley is a feminist who works at the intersections of women’s rights and communication rights.

In  América Latina: Entre el feminismo y los sectores antiderechos, Sandra Chaher notes that while Latin America has seen progress on gender equality in the last 20 years, they have nonetheless been few. “Those who have been most committed have been civil society organizations and professional associations,” writes Chaher, a journalist who specializes in gender and law.

Latin America faces “new and traditional challenges,” writes Chaher, noting how news media industries have been among those stalling progress towards gender equality. She cites the case of Bolivia, which tried to introduce a law to guarantee women a space free of charge in newspapers, to help disseminate messages preventing violence against women. The measure was opposed by the National Press Association, which said it would amount to “financial suffociation.”

In the Democratic Republic of Congo, women remain invisible and stereotypes persist in the news, writes Adeline Nsimire, coordinator of  organization Sauti ya Mwanamke Kijijijini (SAMWAKI) and director of radio Bubusa FM, a community radio station for rural women.

But, Nsimire adds, there is some good news: more and more women are becoming journalists. “We note their increased presence in press companies based both in the capital and in the provincial capitals,” she writes. A survey conducted in 2013 by the Congolese Union of Women found that women represent 43% of journalists on radio, 27% on television, but only 13% in the print media.

Philip Lee, Media Development editor and WACC General Secretary, also notes that the series of Global Media Monitoring Projects coordinated by WACC has “revealed extremely slow progress in bringing women’s voices to bear in public discourse as reflected in the news media.” But, he adds that, “over the years, a great deal of positive work has taken place and many media entities and outlets have altered their practices. So the story is not all doom and gloom.”

Still, a lot remains to be done, adds Lee. “There are still unasked questions, unchallenged assumptions, and a degree of misogyny that has no place in any society that truly believes in universal principles of human rights. We still have a long way to go.”

The 1/2020 issue of Media Development  also includes the following: