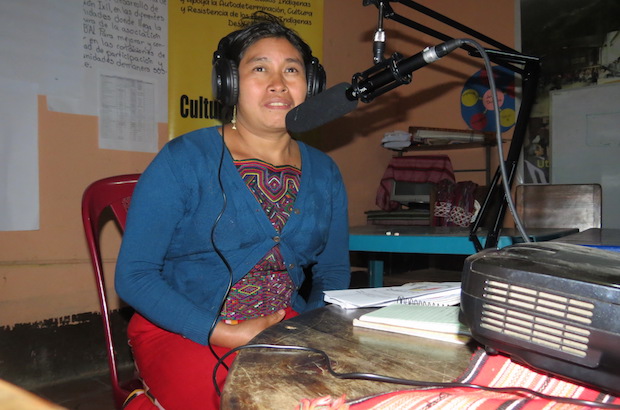 In 2016, the Asociación de Grupo de Mujeres Tejedoras Ixiles Q’imb’al, a women-led civil society organization from Guatemala’s Ixil region, listened to the desire of their Indigenous community members to have a community radio that would “publicize the value of respect for our culture.”

On December 29, 2019, after four years of painstaking work that included seeking support from various entities, learning the ropes of how to set up a broadcast station, radio programming, and buying equipment, Community Radio Tiichajil Tenam was officially launched. WACC, along with Cultural Survival, helped support the creation of the radio station.

The choice of launch date was significant — it was the same day that commemorated the signing of the peace accord that ended the 36-year-old armed conflict in Guatemala.

Asociación de Grupo de Mujeres Tejedoras Ixiles Q’imb’al had, itself, “emerged in a context marked by the aftermath of severe state repression of Indigenous communities, including Ixil communities, during the Guatemalan civil war,” said Lorenzo Vargas, WACC Global manager for Communication for Social Change. WACC, along with Cultural Survival, helped support the creation of the radio station. “The original purpose of the organization was to re-build the social fabric of Indigenous communities affected by the conflict, especially considering the fact that several elders and cultural leaders were killed.”

Elena Brito Herrera, the radio station manager, said community members chose a name that reflected their intent. “Tiichajil Tenam Community Radio means good living,” she said, adding that it was set up so that “people can speak and listen to the information that they need.” 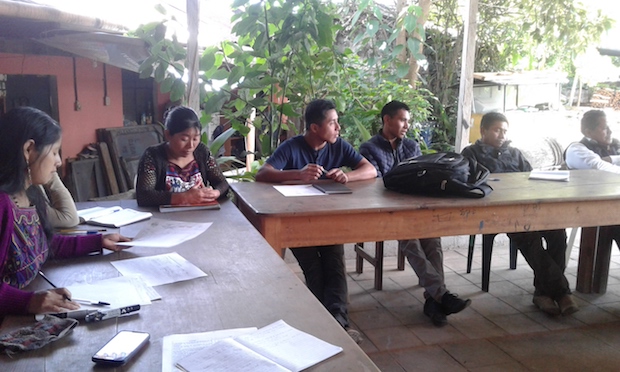 The organization also wanted to set up the radio station “in order to deepen its engagement with local authorities and citizens, as well as to become a more meaningful space the promotion of Indigenous rights and culture at the local level,” said Vargas.

Herrera said her group also heard from families who expressed that “young people no longer pay attention to their parents and to the community.” While there are other local radio stations, “almost all are commercial or religious,” and did not really reflect Indigenous voices and concerns, she said. “The promotion of Indigenous heritage has always been at the heart of the work of Asociación de Grupo de Mujeres Tejedoras Ixiles Q’imb’al,” added Vargas. Over the years, the community’s concerns have also included the arrival of multinational corporations and state authorities into Ixil territories to carry out extractivist projects and to build hydroelectric plants. “The organization has turned its attention to the protection of the environment, especially of water resources, and to promote alternative development efforts linked to sustainable agriculture,” said Vargas.

Right now, the radio station has had to focus on providing critical information about Covid-19 to communities, said Herrera. Using the Mayan Ixil language, it has provided preventive measures against the virus, offered recommendations about food and medicinal plants to improve people’s health, as well as other Indigenous knowledge that can be applied. Public service announcements were made in collaboration with other civil society organizations. Fundebase, Nebaj Indigenous Mayor’s Office, Ixil University and Radio Tiichajil Tenam.

“We keep going, sometimes without electricity because there are cuts very often,” said Herrera.

Herrera said they learned a lot from the experience of setting up the radio station, including the power of community. After consulting with communities, ancestral authorities, other organizations, the association worked the youth of the Q’asab Yol group, the Laval Iq ‘Community Network, the youth of the Ixil University, FUNDAMAYA and the ancestral authorities of the Communities, Vatz Suchil, Xe’ Jalvinte ‘, Turanza, La Laguna, Pexlaj, Xecax  to build the community radio.

A workshop was organized for 16 people (nine women, seven men), who received specialized capacity building/training on community broadcasting, communication rights, and Indigenous rights frameworks, including the UN Declaration on the Rights of Indigenous Peoples.

Five months since its launch, people have already taken notice of the radio station, said Herrera. They have received requests from organizations to cover them, while others have inquired about advertising. “Some organizations ask us how much each program is worth and we have told them to contribute what they can give, according to their abilities,” said Herrera. “We explain that we work as collaborators, that we have neither salary nor fixed support.

Herrera said that while the radio station requires more support, “we are sure and confident that our communities will help us because it is a radio to make the voice of the Ixil communities known, it is broadcast in the Ixil language and in the Spanish language.” — by Marites Sison

Photo above: “Community Radio Tiichajil Tenam was set up “in order to deepen its engagement with local authorities and citizens, as well as to become a more meaningful space the promotion of Indigenous rights and culture at the local level.” From Asociación de Grupo de Mujeres Tejedoras Ixiles Q’imb’al