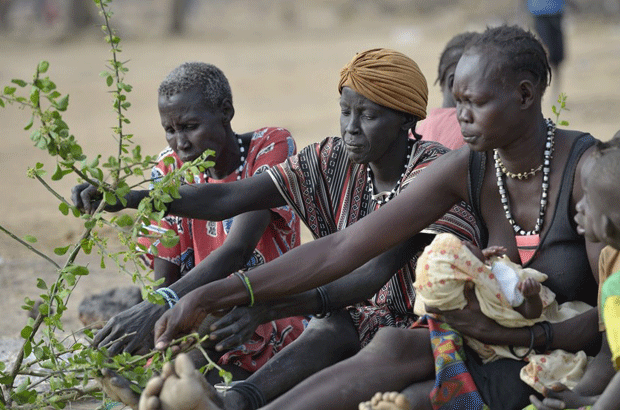 Hungry women eat leaves from the lalob tree in a camp for internally displaced people in Manangui, South Sudan. The tree (Balanites aegyptiaca) is a common “hunger food” in the region. Photo: Paul Jeffrey/ACT

WACC-Africa and project partners identified ways to advance communication rights and gender justice at a forum on Gender and Communication in Africa at War and in Peace, held Aug. 4-7 in Nairobi.

In a communiqué issued after the forum, the members acknowledge that Africa “is going through multiple armed conflicts and post conflict reconstruction processes” and that “women suffer disproportionally in conflict and post-conflict contexts.”

Women also are underrepresented or completely excluded from formal peace and security processes, it said, and their rights are an important issue in those processes. Their voices are often not heard since they “are marginalized on various media platforms.”

Get involved with another initiative on gender justice: WACC’s ongoing Global Media Monitoring Project, a research and advocacy media monitoring process that pursues gender equality in and through the news media.

The Nairobi forum additionally said that although there are many international, continental and regional frameworks for women’s rights, “there is a gap between the promises and the reality made by especially our governments.”