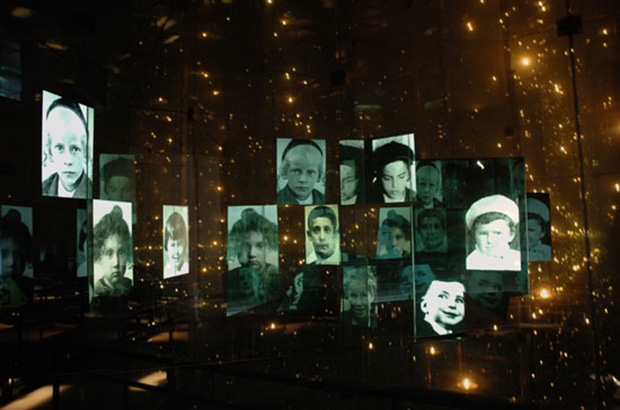 The Children’s Memorial at Yad Vashem. Hollowed out from an underground cavern, this unique memorial is a tribute to the 1.5 million Jewish children who perished during the Holocaust. Photo:Courtesy of Yossi Ben-David/Yad Vashem.

A week of Holocaust remembrance events taking place Jan. 25-29 at the U.N. in New York includes multimedia events and educational activities under the theme “The Holocaust and Human Dignity.”

“The theme links Holocaust remembrance with the founding principles of the United Nations and reaffirms faith in the dignity and worth of every person that is highlighted in the United Nations Charter, as well as the right to live free from discrimination and with equal protection under the law that is enshrined in the Universal Declaration of Human Rights,” said the U.N. in a statement.

The Holocaust resulted in the destruction of nearly two thirds of European Jewry and “remains one of the most painful reminders of the international community’s failure to protect them,” said the U.N.

The week opened on Jan. 25 with a photo exhibit, “Holocaust by Bullets,” which presented the results of fieldwork that enabled a French organization called Yahad-In Unum to collect evidence of massacres during the Second World War in order to return memory and dignity to Jewish victims. The exhibit is organized by the Permanent Mission of France to the United Nations.

On Jan. 26, the “Life after Survival” exhibit opened, commemorating the child Holocaust survivors cared for by the United Nations Relief and Rehabilitation Administration at Kloster Indersdorf, in the American Zone in Germany. The exhibit is sponsored by Concentration Camp Memorial Site Flossenbürg, Permanent Mission of Germany to the U.N., and Heimatverein Indersdorf and Lagergemeinschaft Dachau.

Jan. 27 sees the United Nations Holocaust Memorial Ceremony, taking place on the International Day of Commemoration in memory of the victims of the Holocaust. Invited speakers include U.N. Secretary-General Ban Ki-moon; Danny Danon, Permanent Representative of Israel to the U.N. and Samantha Power, Permanent Representative of the United States to the U.N.  Personal testimony is to be delivered by Jewish Holocaust survivors and a Roma survivor.

In the evening, a concert titled “In Memoriam: Hungarian Composers – Victims of the Holocaust” is to introduce the work of Hungarian composers of Jewish origin who were murdered during the Holocaust.

An educational event highlights Jan. 28, with a panel discussion on the topic “The Future of Holocaust Education.” The briefing is to bring together experts from academic institutions and international organizations, researchers, educators and authors who will examine current trends in Holocaust research and education.

The week’s events end on the evening of Jan. 28 with the screening of the film “Woman in Gold,” the true story of a woman’s journey to seek justice for the theft of a valuable artwork stolen from her family during the Holocaust. The Holocaust and the United Nations Outreach Programme, in partnership with the World Jewish Congress and the Weinstein Company, organized the screening and discussion that will shed light on the loss of personal property and humiliation that Jewish families endured in Nazi-occupied Europe, and how difficult it has been for them to attain justice.