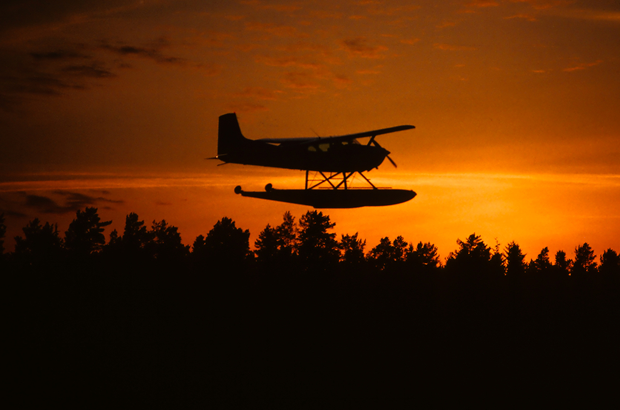 Born in 1948 in Barton Lake in northwestern Ontario, Bill was only seven years old when he was taken away by Canadian government officials and sent to Residential School.

“In Barton Lake, I grew up speaking only Oji-Cree and learning from my elders to respect my culture and the natural resources that allowed us to keep our way of life. Fishing and hunting were sacred experiences, so we learned to respect the water, the land, and the animals.”

“One day, when I was about 7 or 8, I went bird hunting with one of my friends. We got up really early because the best time to hunt birds is early in the morning, at about 7 a.m. We were in the middle of the forest when we began to hear a humming sound we had never heard before, so we ran to the harbour to see what all the noise was about. There was a small yellow plane that had just landed on the water. I don’t remember exactly how it happened, but somebody took me from the lake shore and threw me inside the plane. They started the plane and all of a sudden we were in the air. I was very frightened. That was the first time I was on an airplane. We didn’t have any communication channels back then, so my mother had no way of knowing what had happened to me.”

“After some time we landed in a town where people had pale skin, spoke a different language, and where they had all these big machines I had never seen before – trains and trucks. They put me into a car and we drove a few minutes until they brought me to a large building where there were other children. After a while they told me the place was called a Residential School.”

Bill would spend 15 years of his life in this Residential School in Sioux Lookout.

“I was one of the survivors. During my time in that school I felt like I was always in the dark. I never felt love and I was always very lonely. I was hit many times just because I wanted to speak my language – I was only allowed to speak in English. They even changed my name from Billiby, my name in Cre-Oji, to Bill or Robert. This was initially very confusing for me because my family and elders back in Barton Lake had always placed so much value on speaking Cree-Oji and on preserving our culture. And of course, at the time we had no radio or newspapers or any form of media in our language it was all in English.”

Today, Bill is one of the main broadcasters of Wawatay Radio Network, a community communication network serving more than 20,000 people in English, Oji-Cree, and Cree in the Nishnawbe-Aski Nation territory and in the Treaty 3 and Superior Robinson areas. Bill has worked with Wawatay for more than 30 years and he specializes in producing news programs, though his favourite broadcasts are of the local hockey games, when he has a chance to comment on the intricacies of his favourite sport. Bill is informally known as the “Voice of the North” in Northwestern Ontario.

WACC had an opportunity to learn from Bill’s experience at a seminar on multilingual community media organized in Montreal in partnership with AMARC in July of 2015.

The Truth and Reconciliation Commission

After more than 6 years of work, the Truth and Reconciliation Commission of Canada, established in 2008 to examine the legacy of Canada’s residential school system, released its final report in June of 2015.

The Commission concluded that the residential school system amounted to cultural genocide, and provided numerous recommendations in the areas of child welfare, education, health, the justice system, among others. It also called for a process of reconciliation, and for the United Nations Declaration on the Rights of Indigenous People to become the framework for such process.

Role of community media in reconciliation

Media in general could play a pivotal role in the process of reconciliation the Commission is calling for. Media outlets could shed light on key issues, engage previously disengaged audiences, and give visibility to people whose voices are rarely heard.

However, it is community media groups such as Wawatay that could make the most difference in moving Canada towards true reconciliation and the establishment of new bonds of trust. Community media – that is, media outlets that are managed and operated by local citizens or community-based groups and that produce local media content – could provide much-needed dialogue platforms for reconciliation to happen from the ground up.

Community media outlets could provide spaces for both aboriginal and non-aboriginals to voice their views, listen to each other, discuss the Commission’s recommendations, demand accountability on the part of decision-makers, and highlight local reconciliation experiences. Community media could also play an important role in the preservation of indigenous languages, as in Bill’s case.

From a communication rights perspective, media are key to the rights of aboriginal peoples the world over. For decades, WACC has been working with indigenous community media organizations to defend their communication rights. Many of the things WACC has learned are summarized in this document.

Challenges for the future

Organizations such as Wawatay Radio Network will face a number of challenges in the near future. A lot have to do with access to sustainable funding. There is also a need to bring younger generations of indigenous Canadians, who in many cases face important social challenges, into the management of these kinds of community media groups.

Nevertheless, community media outlets have a key role to play in an eventual reconciliation process in Canada. Not including them would be a missed opportunity.