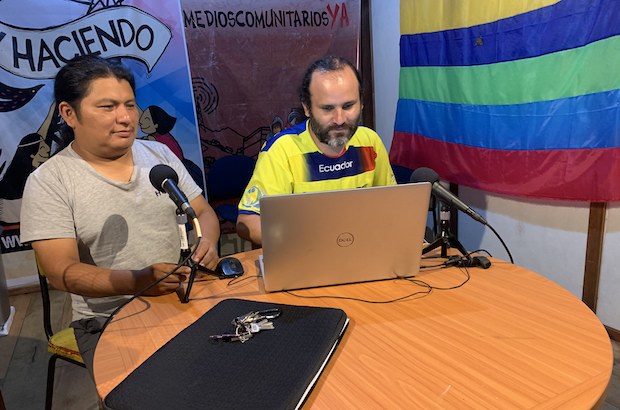 WACC is surveying its community media partners on their response to COVID-19 and their needs to help keep the communities they serve informed and safe. Community media need your help! Please donate to the Community Media Rapid Response Fund.

WACC Global’s grassroots partners in Ecuador and Nepal are actively responding to the Covid-19 pandemic by bringing crucial information about the contagious disease in languages that their local Indigenous communities speak and understand.

#WasipiSakiri (#StayatHome) is a hashtag popularized by the NGO Confederation of Indigenous Nationalities of the Ecuadorian Amazon (CONFENIAE) among Indigenous people in Ecuador who speak Kichwa; #JeminPujusta, in Shuar language.

When the Ecuadorian government issued a state of emergency in response to Covid-19 on March 15,  CONFENIAE said it realized “the gravity of the situation,” and immediately suspended its other activities and switched gears.

Since Covid-19 regulations and information being issued by the government were mainly in Spanish, CONFENIAE saw the need to translate them into the languages of various Amazonian cultures, said the organization’s director, Andres Tapia.  The group also took on the task of translating official information about Covid-19 from the World Health Organization (WHO).

In Nepal, the Indigenous Community Radio Network of Nepal (ICRN) said it was prompted to take action because it didn’t see any public service announcements (PSAs) about the disease targeted specifically for Indigenous peoples. Many Indigenous people have been assimilated in other communities due to massive development projects in their home communities, according to Jagat Man Lama Dong, ICRN chairperson.

Nepal’s Indigenous people are especially vulnerable to the pandemic, because of economic and food insecurity, as well as being marginalized from services, he added.

The ICRN, in partnership with Indigenous Television, has jointly produced public PSAs about Covid-19 in 15 different Indigenous languages, and in one Nepali language. These have been widely distributed not only to 21 Indigenous radio stations, but to 350 community radio stations across Nepal, as well as on Indigenous Television and its social media platforms, said Man Lama Dong. PSAs were produced and distributed in the following languages: Nepali (national language), Gurung, Tamang, Nepalbhasa/Newari, Sunuwar, Thami, Magar, Tharu, Bantawa rai, Chamling-rai, Kulung-Rai, Dungmali Rai, Hyolmo, Sherpa, Uranw and Limbu.

Both ICRN and CONFENIAE underscored the importance of taking into account the local context of communities when developing messages about the coronavirus.

Tapia noted both the oral, communal and face-to-face communication traditions of many Indigenous communities. It was important to emphasize, for instance, that folks should not drink  chicha (alcoholic beverage) from the same bottle, or that they ought to maintain physical distance from people and not organize mingas or assemblies.

Since radio and television remain the best means of reaching Indigenous audiences, Jagat said his group saw that it had a critical role to play in educating and informing communities about Covid-19. “We believe that such messages have helped our communities understand the disease,” he said. He added that the Nepali government’s decision to put the country on lockdown had created an atmosphere of fear, which his group worked to mitigate by explaining why it was needed.

Both groups said their work has been well-received by the public and seen as an important contribution in the face of the pandemic.

“We are thankful to WACC as well as Cultural Survival in this initiative for their support in this critical situation, as we have only been the media to produce PSAs in different indigenous languages spoken in Nepal,” said Jagat.

The pandemic “has reminded us of just how critical access to accurate information and trustworthy communication platforms is,” said Lorenzo Vargas, WACC program manager for Communication for Social Change. “WACC supports the ongoing efforts of our community media partners around the world to bring accessible and easy-to-understand information in local and Indigenous languages about Covid-19 to marginalized and underserved communities. Many of these communities are not reached by information provided by governments and mainstream commercial or public media.” — by Marites N. Sison

Photo above: Grassroots organization CONFENIAE translated  COVID-19 information and regulations released by the Ecuadorian government into the languages of various Amazonian cultures to help inform and protect Indigenous communities.