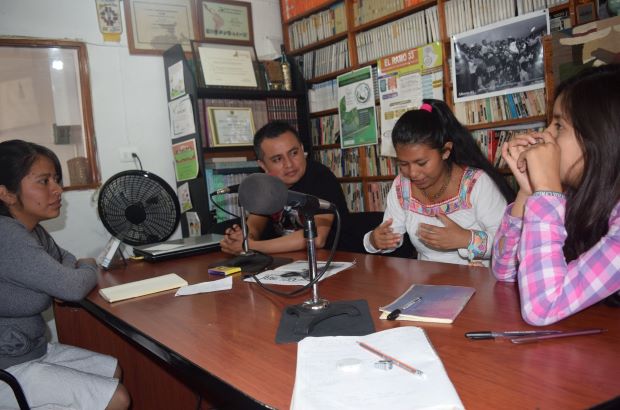 The purchase of a 300-watt transmitter and the construction of a radio cabin, recording studio, and antenna has allowed Radio Tzinaka, a community radio station in Tzinacapan, in Mexico’s state of Puebla, to reach more Indigenous municipalities.

Through its partnership with WACC, the radio station has  improved its overall operations, including its capacity to produce more radio programs, democratize its internal structures and foster relationships with other community media organizations, said Lorenzo Vargas, WACC Program Manager for Communication for Social Change.

Radio Tzinaka has also been able to obtain its Civil Association status, and increase its team of Nahua members and its base of volunteers.

The station was established in 2002 by young people from the Nahua nation who wanted to establish a “local dialogue and communication space” in the Nahuatl language, which is the dominant language in the east-central region, “in order to promote local development from an Indigenous perspective,” said Vargas.

WACC maintains that “people’s ability to communicate in their own language is one of the cornerstones of communication rights.” The United Nations has declared 2019 as the International Year of Indigenous Languages.

*Nahuatl is “the language of the Aztecs, Toltcec, and others,” and with about 1.4 million speakers, “is the most widely spoken Indigenous language in Mexico,” according to Cultural Survival, an NGO which has been advocating for Indigenous People’s rights since 1972.

Vargas said WACC supported the radio station’s project – which ran from May 2018 to January 2019— because it was “in need of capacity building and new equipment in order to truly fulfill its mission.” Radio Tzinaka also sought to develop a strategic and sustainability plan to guide its activities in the coming years.

The radio collective has cited other positive outcomes as a result of the project, including the preparation of its internal regulations and policies, and the formation of new teams to handle technical, administration and development matters.

The purchase of a new transmitter now allows Radio Tzinaka to broadcast in the municipalities of Huyatlalpan, Chumatlán and Zozocolco de Hidalgo, said Vargas.

Photo above: Radio Tzinaka was established in 2002 by young Nahua people who wanted to establish a “local dialogue and communication space” in the Nahuatl language.