Intersectionality, community, and memory of a just future
32603
post-template-default,single,single-post,postid-32603,single-format-standard,theme-bridge,bridge-core-3.0.1,woocommerce-no-js,qodef-qi--no-touch,qi-addons-for-elementor-1.5.6,qode-page-transition-enabled,ajax_fade,page_not_loaded,,qode-title-hidden,columns-4,qode-child-theme-ver-1.0.0,qode-theme-ver-29.2,qode-theme-bridge,qode_header_in_grid,qode-wpml-enabled,wpb-js-composer js-comp-ver-6.10.0,vc_responsive,elementor-default,elementor-kit-41156 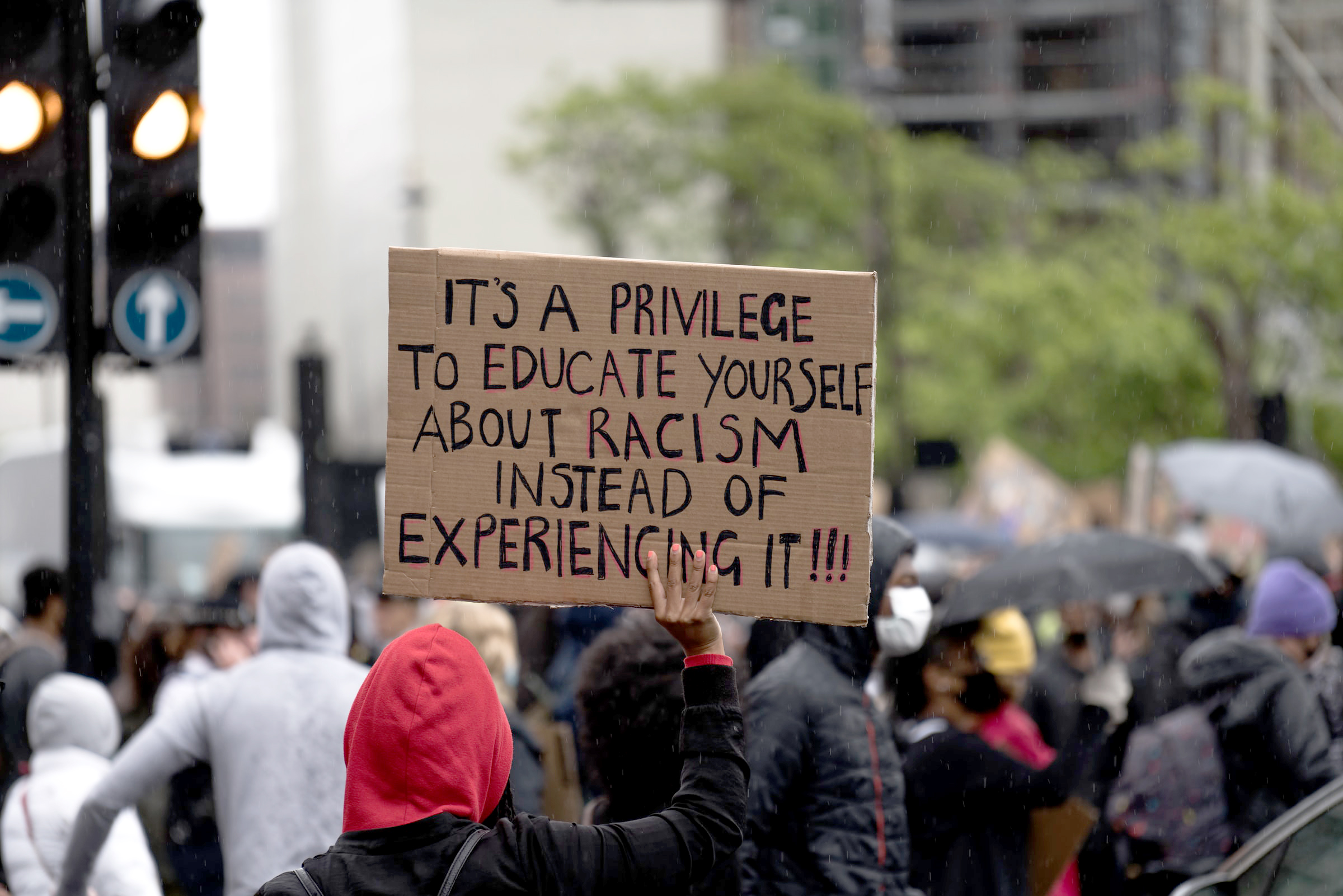 19 Nov 2020 Intersectionality, community, and memory of a just future

The dual shadow cast by the Covid-19 pandemic and the killing of George Floyd, an unarmed black man, by police brutality has made many of us in the USA “see” things which often go unreported or underreported in the media landscape. The dual pandemic has unveiled social inequities as never before. News media have been relentlessly capturing impact stories of Covid-19 as well as systemic racism.

A cursory look at the headlines in news media on the medical pandemic throws light on the impact of the layered crisis of Covid-19 on vulnerable communities. “Families in the Lower Income Brackets Hit the Hardest by Covid-19,” “CDC (Center for Disease Control) Hospital Data Point to Racial Disparity in Covid-19 Cases,” “Black and Latino Communities Hardest Hit By Covid-19,” “Covid-19 incidence more than triple among Native Americans,” “The erasure of Indigenous people in U.S. Covid-19 data,” “Young People of Color with pre-existing Conditions face elevated Covid-19 risk,” “Covid-19 is a ‘crisis within a crisis’ for homeless people,” “Small rural counties struggle with Covid-19 in ways big counties don’t,” “Work-from-home model does not work for this group,” “Parking Lots Have become a Digital Lifeline,” and “Women care givers at the front of the crisis.” The issues identified are humanized with compelling stories.

For naming and identifying the patterns that emerge from these stories, I turn to a way of seeing popularized by Kimerlé Crenshaw, a legal scholar. A lens and a critical framework of seeing these multiple realities of inequalities collectively is known as intersectionality. A lawyer by profession, Crenshaw who worked among battered women in the 1980s, especially African American women, named an experience that these women embodied. That is, multiple layers of oppression due to their race, class, sexuality, locality etc., intersected in the everyday lives of these women at the margins.

Crenshaw names the current moment of the dual pandemic in the U.S., as the convergence of “intersectional vulnerabilities” and “pre-existing vulnerabilities”.1 A peek at the news coverage and analyses of the media highlight these inequities, while addressing these issues is a burden laid at the feet of communities and policy makers at large:

Putting on a mono-dimensional lens such as an economic or gender or racial framework misses the intersectional negative impact of the nature of Covid-19.

The medical pandemic is a crisis within the pandemic of structural and systemic racism, especially against the African Americans. In the wake of the death of George Floyd by police brutality, Black-Lives-Matter protesters took to the streets in support addressing racial injustices against African Americans. Solidarity marches against racism and police brutality around the world flashed across the media. Most of the protesters in the U.S. are white, unlike, the Civil Rights protest marchers in the 1960s, and today’s marchers are under 35 coming from various racial and ethnic backgrounds.

News stories of racial injustices as well as stories of protesters righting the wrongs of history have created a constantly evolving and shifting communication environment.

Some of these changes are symbolic. The removals and dislocations of Confederate flags, statutes, and signs are contested realities, since these images and representations belie belief systems and identities often associated with white supremacy for those who have lived the underside of history as well as those who now stand in solidarity with the latter. For others, the same emblems are visual symbols and historical markers of heroism and heritage in the public space. Historical injuries and the accompanying struggles are likely to be fought in the memories of people, as history is being revisited in order to sift through myths and facts.

The medical pandemic, coupled with the pandemic of racial injustice, has been exploited to spread misinformation and fake news. The World Health Organization calls the spreading of medical disinformation an “infodemic”. Certain websites use social media as a platform for contagious misinformation, medical myths, and health-related false stories for political and corporate gains. Combating the spreading of false narratives and misinformation involves fact-checking on the part of media users, removal of misinformation, and fixing the complex algorithms involved in the rapid proliferation of such news.

The political narratives around Covid-19 are intense and fall along deep divisive party lines. Distrust and scepticism around vaccination, in general, has existed for a long time. In addition, mistrust around vaccination for Covid-19, in particular, is present also among some African American communities who carry scars and memories of prior racial experiments and unethical medical researches performed on their bodies in the past.

The voice of local newspapers, much needed for communities at this moment, has been in steady decline due to loss of funds. News headlines sum up the crisis and articles offer analyses:

The solutions for the crises rest with local communities, clues of change and transformation stemming from the grassroots. Covid-19 has also compelled one to see the plain truth of assessing and tapping into the strength of the vulnerable communities in decision-making, formulating policies, and their implementation.

For communicators of faith, especially, local journalism touches a range of delivery options starting from its basic role of offering news relevant for daily living to enabling the community to frame its compelling emotional, intellectual, moral, and spiritual vision of reality.

Memory of a just future

At the national level, recognizing the constantly evolving and complex nature of the Black-Lives-Matter protests in the U.S, amid the twin pandemic, the World Association for Christian Communication, North America, has sent out a press release recently, along with The Associated Church Press and Religion Communicators Council, condemning the “interference and abuse of journalists as they cover protests against police brutality and the extrajudicial killings of Black Americans,” and the “repeated claims of ‘fake news’ and naming the press as ‘enemies of the state’ by the United States president.”6

A core value of journalism is focus on truth, the search for it amidst the fog of competing ideologies and contradictory narratives, and the ethical commitment that accompanies this task. Communication is also a spiritual exercise – spirituality that is transformational. A transformative spirituality calls for resistance to everyday choices and systems and structures that promote injustices.7 An upstream calling of this spirituality is speaking truth to powers and addressing the root causes of injustices.

Truth itself has been on trial time and again. The new communications environment in the midst of Black-Lives-Matter brings an old question to the forefront: objectivity versus taking sides. The present moment is a platform for communicators to encounter and interrogate the traumatic past and its legacy on the present.

Christian communication’s challenge today, as it has always been, is speaking truth to power, especially when Christian nationalism colludes with the systems of power, when church communication itself may be co-opted by powers against Christian communication, and when the trauma-informed people in our midst speak for themselves and call for allies who can stand in solidarity with them in building a just future.

For Christian communicators, the present moment is also a platform to draw in the “memory of the future”, a vision of peace and justice, hope and resilience for human flourishing and a mended and healed creation, in the midst of the current structural inequities, and to take sides with the marginalized who “hope against hope”.8 This convergence of the present, past, and future is an extraordinary platform. A “Kairos” moment. Acting NOW for transformative changes is a prophetic calling.