Posted at 16:25h in News by Hisashi Yukimoto 0 Comments 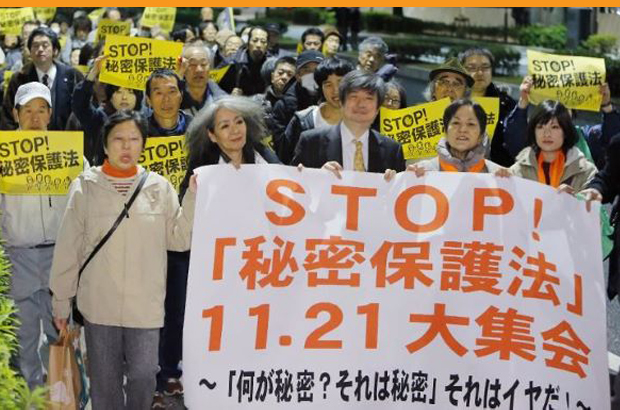 Civic group members holding banners to protest a controversial bill on November 21, 2013 that gives Tokyo broad powers in deciding what is a state secret, and severely punish those who leak information. Photo: Agence France-Presse

Law would deprive citizens of the ‘right to know,’ says council

Tokyo, Japan—Japan’s legislature, the Diet, on Dec. 6 passed a highly contentious state secrets protection bill into law, despite protests from the opposition, the public and church leaders.

The bill, submitted to the Diet on Oct. 25, aims to tighten control of sensitive information in such areas as diplomacy, defense, anti-spying and antiterrorism as state secrets. Those found guilty of leaking the secrets could face up to 10 years in prison, according to a Dec. 6 story in Asahi Shimbun, one of Japan’s oldest and largest newspapers.

One of the most controversial points of the bill is that it allows bureaucrats and elected officials to arbitrarily widen their interpretations of what they deem to be state secrets, said Asahi Shimbun.

And it has no definite mechanism for an independent panel to verify whether these designations are appropriate, although the government has announced plans to form a “third-party” body to oversee this process, the newspaper reported.

Japan’s Catholic bishops protested the bill. In a statement on Dec. 7, the standing committee of the Catholic Bishops’ Conference of Japan warned the passage of the law through the House of Councilors could “destroy the foundation of democracy,” according to UCA News, an Asian Catholic news service.

The statement, addressed to Prime Minister Shinzo Abe, stressed that the law could jeopardize the three main principles of the Japan’s constitution: the people’s sovereignty, respect for basic human rights and pacifism.

Many organizations, including the Japan Federation of Bar Associations and the Japan PEN Club, also issued statements against the law. On the day of the vote, about 15,000 people gathered in central Tokyo to protest against the legislation.

The bishops’ committee members stressed that “we strongly oppose these rough and ready votes and demand that the same mandatory votes will never be performed again.”

The prelates also expressed fear that information about nuclear plants might be hidden from the public.

“The bill being discussed now seems very similar to the Public Order Preservation Law” enacted in 1925, which enabled Imperial Japan to arrest anyone who voiced protest against the then-government, said Takeda, a Buddhist monk and secretary of Shukyosha Kyujo-no-wa, a multi-faith grouping, according to the Tokyo Times.

The National Christian Council in Japan (NCCJ) on Nov. 22 had released a statement against the bill, which was passed by the Diet’s Lower House on Nov. 27.

“The Designated State Secrets Protection Bill is an evil bill that would deprive the people who are the sovereign of their right to know, punish them if they are just seen as approaching designated secrets, and control the freedom of thought and religion of the people,” said the NCCJ executive committee.

“We express our strong opposition against the bill, as we are deeply concerned that Japan would become a ‘war-making nation’ again by enacting this bill,” the statement said.

Asahi Shimbun reported that during the debate, one opposition legislator yelled that the bill was “typical of the ruling party’s arrogance.” Another said, “it is tantamount to declaring that the opposition’s voice does not need to be heard.” Committee members from Your Party and the Japan Restoration Party left the meeting in protest before the vote, arguing the bill has yet to be debated fully.