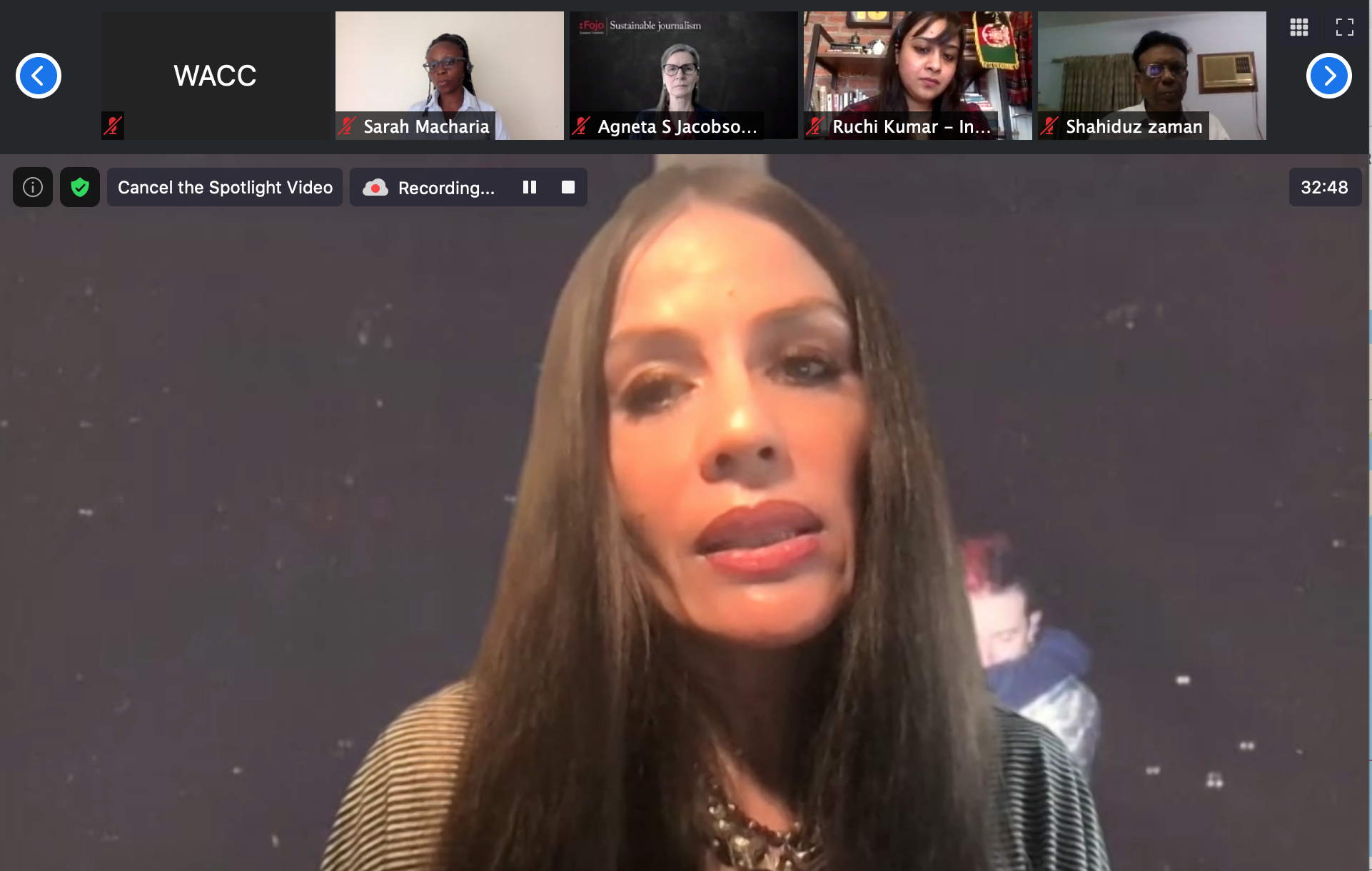 The recent killing of three journalists in the ongoing Russia-Ukraine war highlights the importance of protecting and promoting the safety of journalists, particularly female journalists, who are at greater risk of being subjected to gender-based violence, said Guilherme Canela De Souza Godoi, Chief of UNESCO’s Freedom of Expression and Safety of Journalists Section.

Everyone, including UNESCO, “should do more” to advance the prevention, protection, and prosecution of crimes against journalists, said De Souza Godoi, speaking at an online event March 16 organized by the Global Alliance on Media and Gender (GAMAG) and Fojo Media Institute as part of the 66th NGO CSW Forum. The forum, Gender in Media, presented the results of research conducted by GAMAG on engendering mechanisms for the protection of journalists, and Fojo Media Institute’s study on global gender equality and media regulation. 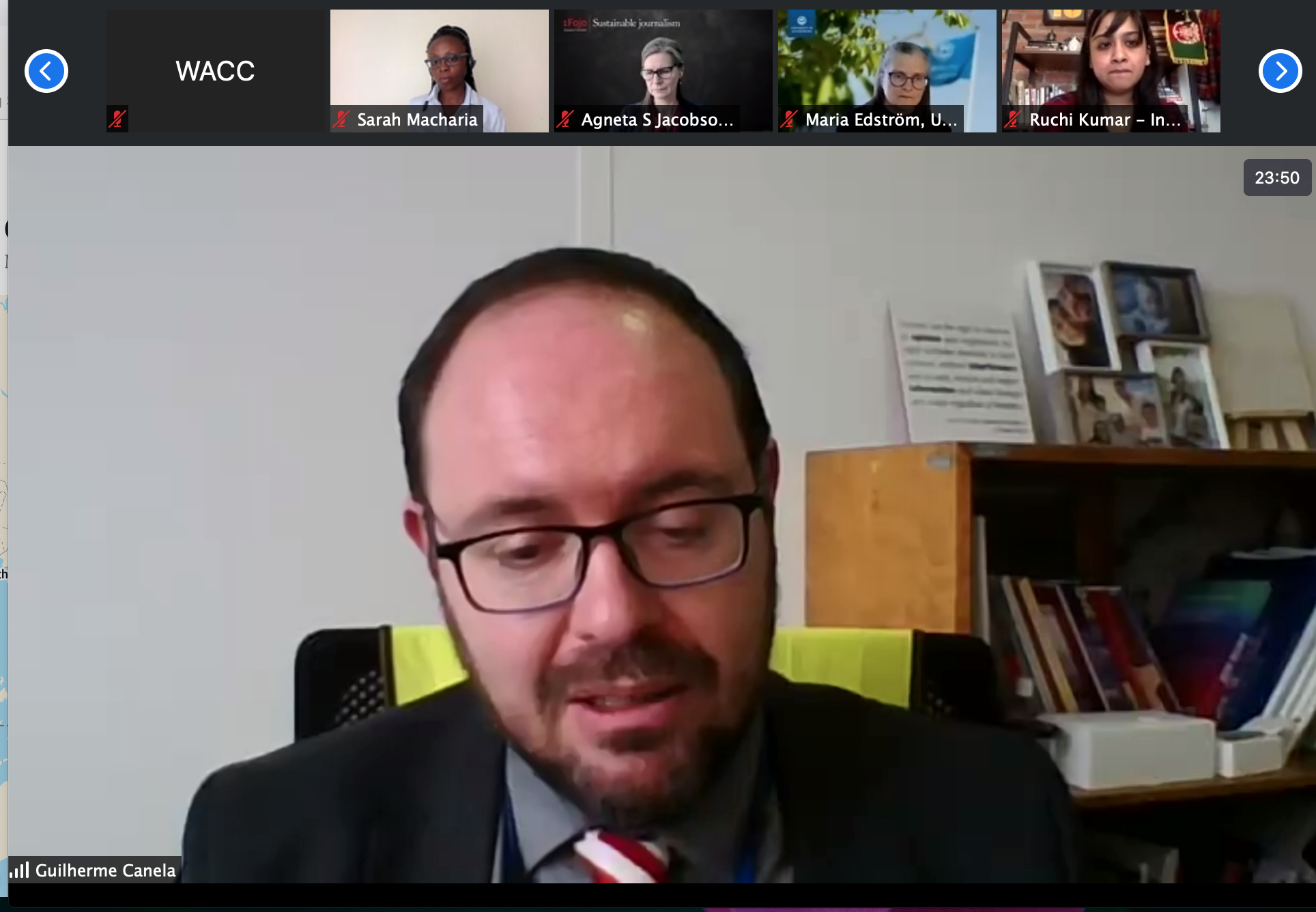 UNESCO has been working with the International Center for Journalists (ICJ) to launch a series of governance-related recommendations to address the safety of women journalists online, said De Souza Godoi Nearly three-quarters of women journalists say they have been subjected to online abuse, harassment, attacks, and threats, which have sometimes spilled over to violence offline, according to a recent study by ICJ and UNESCO.

Noting this year’s 10th anniversary of the UN Plan of Action on the Safety of Journalists and the Issue of Impunity, De Souza Godoi stressed the need to “empower the structures of prosecution services of law enforcement agencies” so they can truly break down the cycle of violence.

He stressed the importance of preventive measures, citing that UNESCO has been working with the International Women’s Foundation and has launched an openonline course on the safety of women journalists. He acknowledged that this was just “a drop in the bucket” and that it was important “to develop specific protection mechanisms” and address issues related to media regulation. “We need to have gender-based policies here,” he said, adding that internet companies need to be part of the conversation. “Without engaging them, it will be impossible to develop adequate public policies on the protection of women journalists online, and one fundamental element here is that these companies should be more transparent. We simply don’t know how exactly or if they [are implementing] internal policies to protect women journalists online.”

‘Lack of a gender approach’

Aimée Vega Montiel, chair of GAMAG’s executive committee, said GAMAG’s study focused on the three most dangerous countries in the world for women journalists — Mexico, Afghanistan, and Iraq. The study evaluated each country’s national mechanisms for ensuring the safety of journalists, analyzed gender-based violence threats against women journalists, and responses developed to tackle them.

“National mechanisms for the protection of journalists have become an institutional response but have failed to ensure the safety of women journalists,” she said. “One of the main reasons is the lack of a gender approach in the risk analysis and in the measures adopted by these mechanisms.”

Basma Elmahdy, who conducted the research on Iraq, said women journalists there not only have to navigate a “highly-charged political climate,” and violations by armed groups and security forces controlled by powerful political and religious figures. “They are also vulnerable to additional gender-specific dangers,” she said, adding that the Covid-19 pandemic has also led to job losses and less income for women journalists. 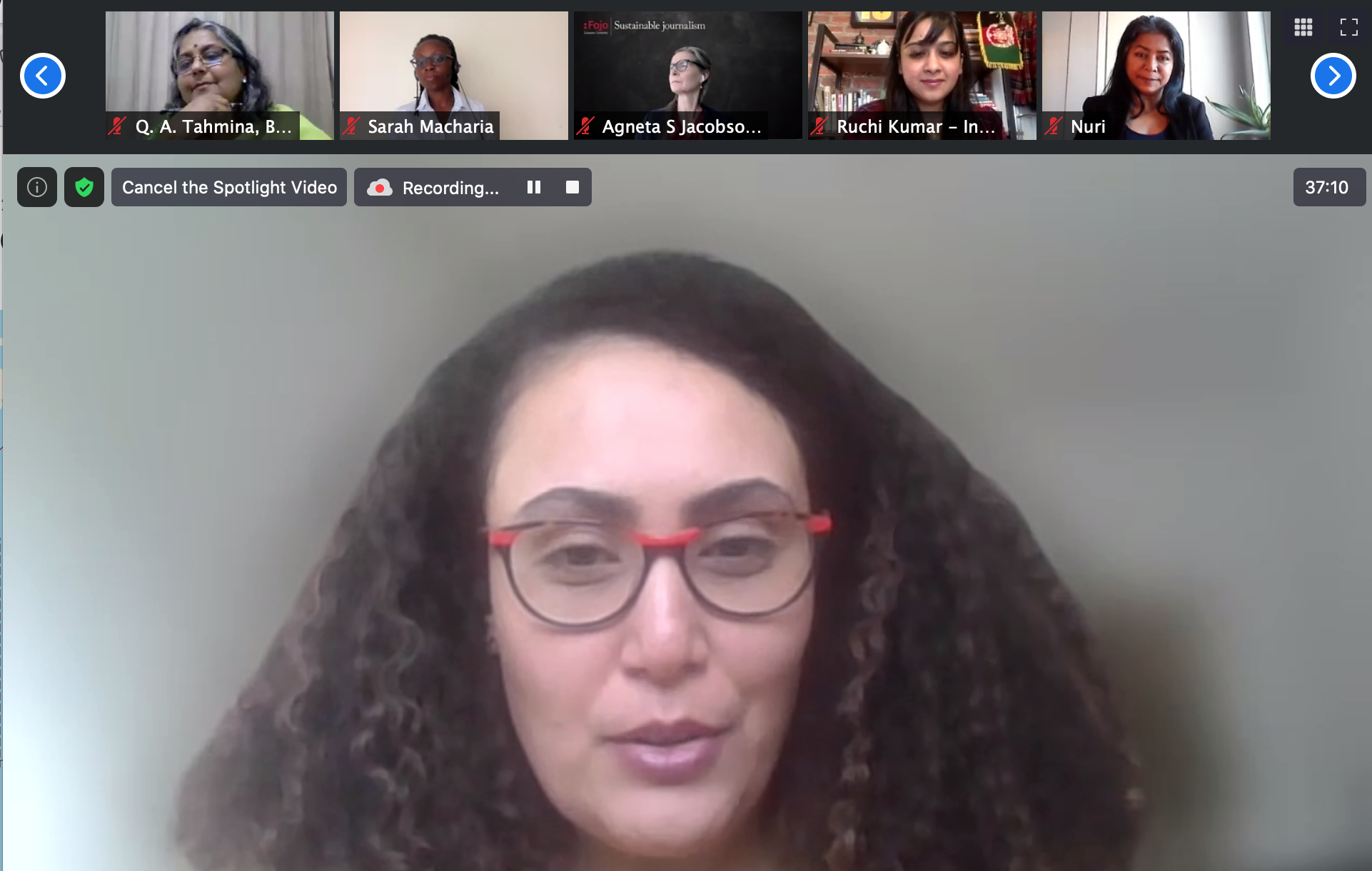 Elmahdy noted that Iraq’s journalism community tend to deny the existence of gender-based violence in the media. Social stigma prevents women journalists from going to the male-dominated police station to report violence against them, she said. None of the women journalists were aware of an existing national mechanism for the safety of journalists. There is a special investigative unit for the protection of journalists, but it remains “a work in progress” because it lacks teeth, said Elmahdy.

Ruchi Kumar, who has been reporting on Afghanistan and spent six years in Kabul, painted a grim picture of the state of the news media since the Taliban takeover in August 2021. The number of formally employed women journalists has dropped from 1300 in early 2021 to fewer than a hundred, 39 of them in Kabul, as of February 2022, said Kumar. Not only is it unfair that the “weight and pressure of telling the stories fall on these women,” it is also “very damaging to freedom of speech and information,” said Kumar. 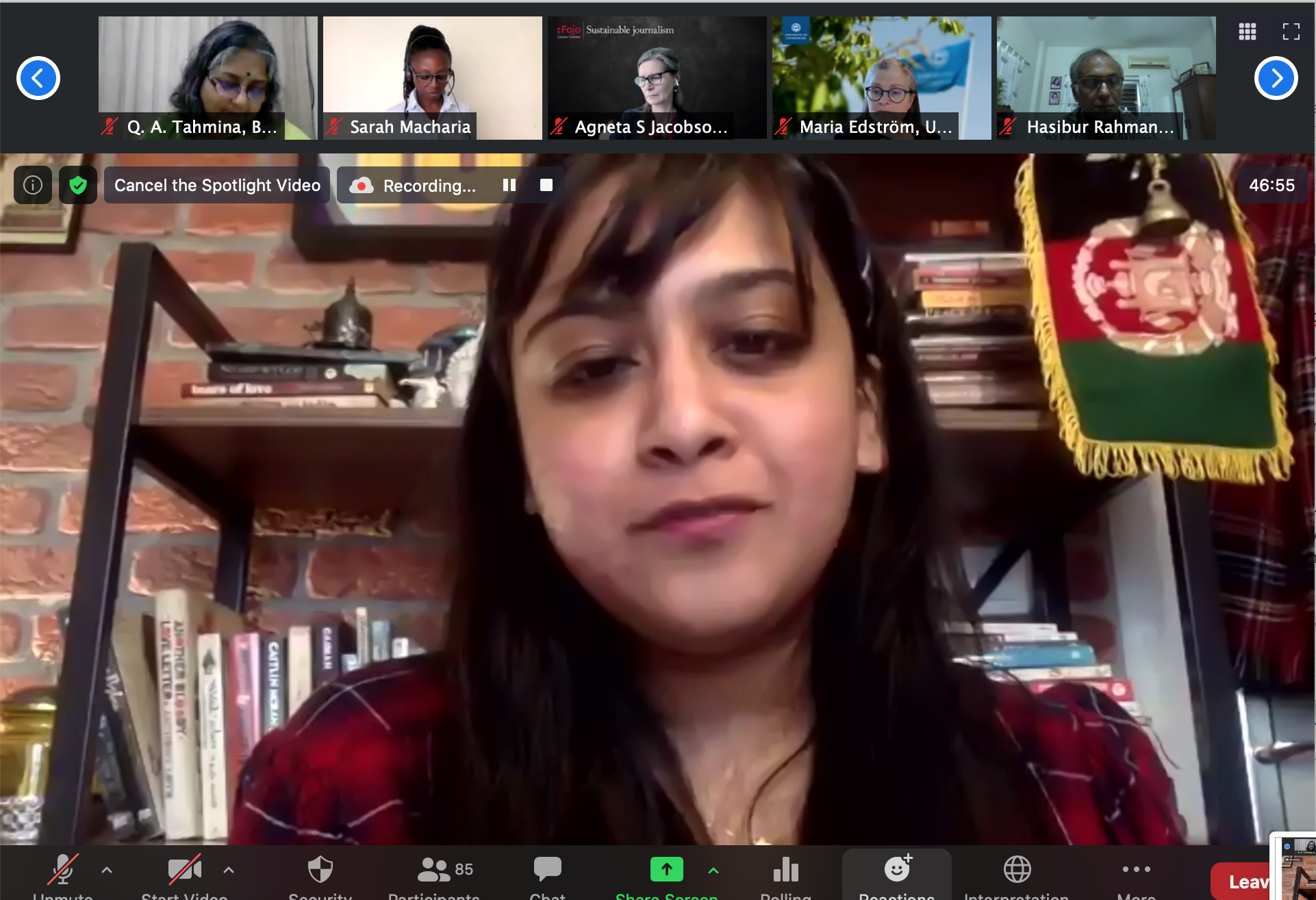 While the Taliban promised to uphold existing laws, they also introduced new rules for journalists, most of which “contradict the laws that exist,” said Kumar. This has created an environment where media freedoms have been restricted and journalists are practicing self-censorship, she said. Women journalists have also been banned from appearing on television and from broadcasting on radio. Those who have stayed behind continue to protest and put pressure on the Taliban to honour the laws despite numerous risks, she said.

In Mexico, Vega Montiel noted that in the last three years, 65 journalists have been murdered. This year alone, eight journalists have been killed, she said, adding that “the level of risk is higher,” and the Covid-19 pandemic has exacerbated conditions, especially for women who face different kinds of violence at work and at home.

The Mexican government has done little to address the problem, and has even removed protections for journalists and human rights defenders, she said, adding that President Andres Manuel Lopez Obrador himself has been openly hostile towards independent journalists.

A survey of 137 women journalists across Mexico showed that violence online continues offline, said Vega Montiel. Women reported physical, sexual, psychological, economic, and patrimonial violence. Their aggressors include their own colleagues in the media, state representatives such as police, members of congress, and federal offices, as well as information sources, criminal groups, and private corporations, said Vega Montiel.

Meanwhile, Agneta Söderberg Jacobson, gender advisor at Sweden’s Fojo Media Institute, introduced the global gender and media regulation project conducted by the Institute, along with the Department of Media and Communication at Gothenburg university and scholars, including Sarah Macharia, WACC programme manager for gender and communication and GAMAG general secretary. 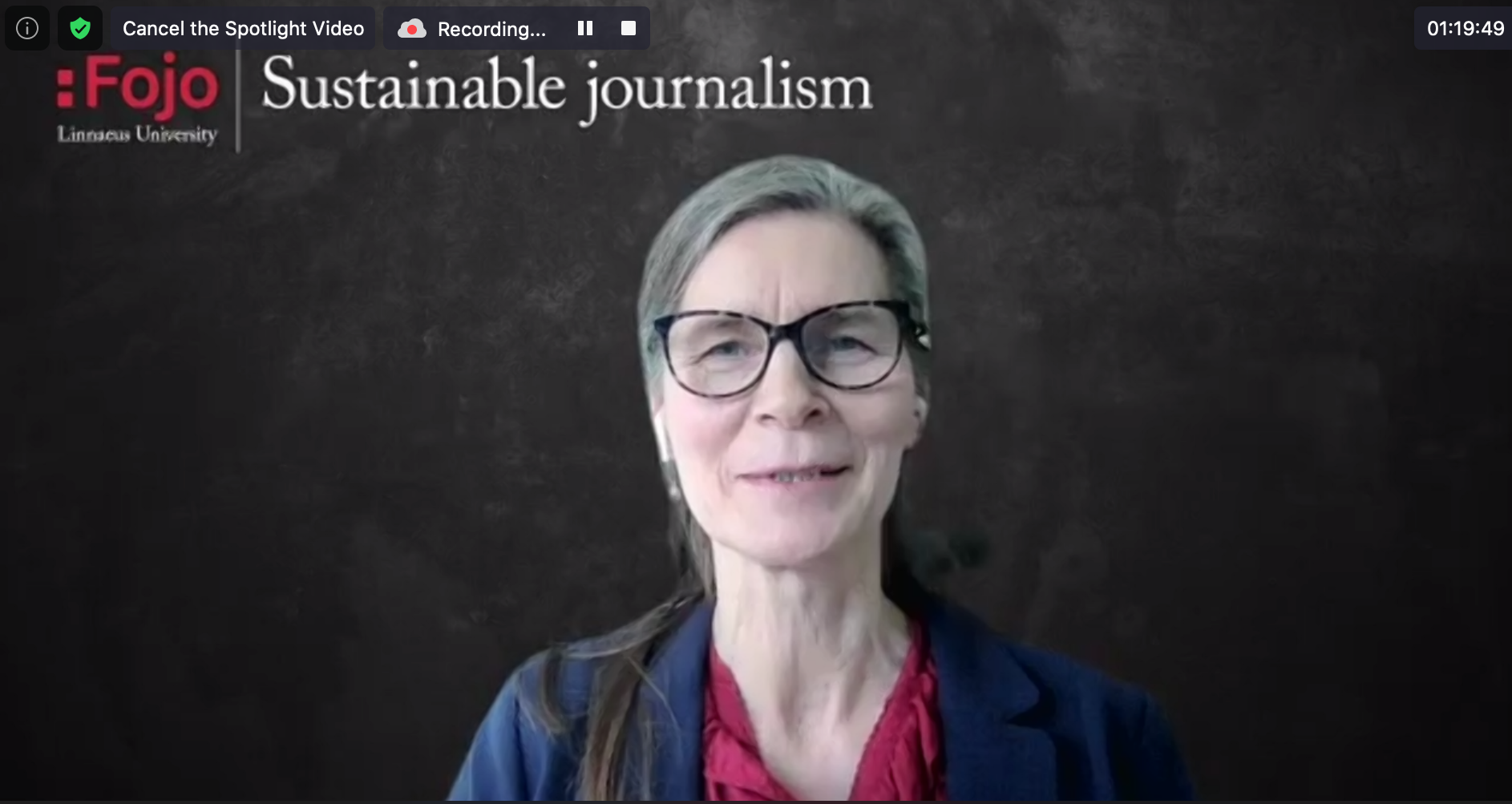 “This is a unique study in the sense that it examines how and to what extent gender equality and freedom of expression is integrated into media law and policy not either,” said Jacobson. She explained that there has been limited comparative data on gender equality in media law and policy, especially in the Global South. The study also investigates “the potential tension between promoting and protecting when it comes to women’s freedom of expression, and gender equality, with media freedom.” It also identifies policy measures and mechanisms that can promote gender equality in and through the media “without sacrificing media freedom and independence.”

A key takeaway from the study is that “there is no contradiction between gender equality and freedom of expression, and media independence and freedom,” said Macharia. “Both are essential for democracy. And they’re all protected by international norms and standards.”