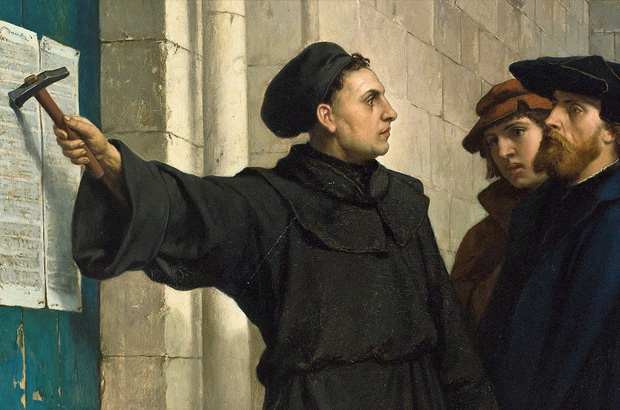 Martin Luther did more than just serve as a catalyst for the Reformation. By nailing his 95 theses to the door of a Wittenberg, Germany, church in 1517, he became the world’s first mass media figure and launched a new form of theological writing, argues University of St. Andrews Professor Andrew Pettegree.

Professor Pettegree discussed his research and his new book Brand Luther during a talk at Harvard Divinity Scholl (HDS) on 29 March 2016 titled “Martin Luther, the Reformation, and the Creation of a Media Phenomenon”. A special exhibit was put on display in the Andover-Harvard Theological Library in conjunction with Pettegree’s talk.

Before his visit to campus, HDS communications spoke with Pettegree about how Luther was able to leverage the printing press and be propelled from a virtual unknown to the most published writer since the birth of printing.

HDS: In your book you say that Luther “invented a new form of theological writing.” Can you describe the type of writing he invented and do you still see aspects of it at work today?

AP: I think the genius of Luther − the totally unexpected genius of Luther − is that he finds a way of writing very short works. If you look at the Sermon on Indulgences and Grace in 1518, that is both a masterpiece and a revolution. It’s only 1,500 words long. It divides the teaching of the 95 theses into 20 short paragraphs, seldom more than two or three sentences, and it speaks in an accessible way to those without theological education. It can be read aloud in 10 minutes.

Theological writing before this largely depends on a massing of examples, on repetition, and emphasis on complexity. Like so much academic writing today, it takes a lot of its armour and rhetorical strength from these qualities. One of the great things about Luther is that he just didn’t care about the expected norms. Writing theological works in the vernacular was itself, in many respects, the start of the Reformation.

Having done what he did with the Sermon on Indulgences and Grace, this is something that is pursued pretty consistently through the opening years of the Reformation when he puts out 45 original works, half of them no longer than eight pages long. Once he discovers this path he pretty much keeps to it.

HDS: How did Luther’s writing style impact the spread of his message?

AP: I think if you compare the publishing history of the 95 theses and on the Sermon on Indulgences and Grace, they’re very indicative. His 95 theses is a relatively conventional invitation to debate, addressed to fellow scholars in Latin. The reprinting of the vernacular sermon is the moment at which the movement goes viral. It’s reprinted 14 times in the first year and it moves through all of Germany’s major centres of publication (with the exception of Cologne, which stays defiantly orthodox). That’s a pattern that continues in the years following the Reformation.

That pattern is exactly what is required both to spread the message and to ignite the interest of the print industry, because that is also changing the model of publishing. Most texts published before the Reformation are complex, far longer, and require more investment. So, the commercial model for that is you publish a single edition in a major commercial centre where you can raise capital and then distribute this edition throughout Europe. That describes the publishing of the majority of theological works in this period.

What Luther is doing is creating multiple opportunities for multiple publishers because an eight page German tract can be turned off the press quickly. You get an extremely rapid return of capital, and it moves off to profit quickly. From the point of view of the industry, Luther has created for them a far more benign model of sales and distribution.

HDS: You call Luther the world’s first mass media figure. What made him so?

AP: He became well known very quickly. Also, he was not someone from a social level where one could have been expected to become a known face. He was not a ruler, he was not a dignitary in his own order, he was not a prince of the church. And yet, within two or three years of the publishing of 95 theses, he was the most published author in the history of printing, living or deceased. By 1521, there were more works published by Luther than any other single figure since birth of printing 80 years before.

It meant people were not only interested in what Luther said, but also in Luther as a progenitor of this phenomenon. Luther’s personality and role became as important as what he was saying. You see this in engravings or woodcuts of Luther that were circulating so widely at the time. People wanted to know what he looked like.

He has all the trappings of celebrity down to people’s fascination with his person and his desire to see what he looked like. To a surprising extent he embraced this. I found a remarkable little note in one of his letters in which he writes, “PS, I’m sending you copies of this portrait, which I have signed as you asked.” I thought this sort of celebrity culture where a president or film star sends along a signed photograph was very modern. Yet here is Luther embracing it in the 16th century.

HDS: How did Luther’s actions fit in with his beliefs?

AP: I think you have to take into account here that Luther’s beliefs were evolving very rapidly and they were evolving in such a way that he always risked outrunning his supporters. Critical in that respect were his supporters in the Augustinian Order and most importantly Frederick the Wise.

What was more difficult was when the debate became an issue of authority rather than theology, at which point he began to move toward especially radical beliefs. If you call the head of your own church the Antichrist, that puts you in a very different position, and to some extent a false position, because Luther himself claimed always to be a faithful Catholic and believed as much for the remainder of this life.

You have to understand with Luther his whole approach during the theses years was reactive. He was responding to his critics as his developing theology was criticized by them.

At every stage he’s testing his supporters to stay with him or not. In such an evolving political situation it’s hard to look for consistency in such a short period when Luther was thinking on his feet and reacting to events. That’s an extraordinary part of his genius.

HDS: Would the Reformation have happened without Luther coming of age in the printing press?

AP: A Reformation had already happened, I suppose, with the 15th century Hussite, and if you look at the Bohemian Movement you can see the contrast with the Reformation a century later. Hus had been martyred and that had sparked a nationalistic revolt and ultimately a successful one. I think that helps explain why Charles V didn’t give into the advice of his inner circle to have Luther arrested − he feared another Hus.

What I think the print gives you is the extreme rapidity with which Luther’s views and news of Luther can be spread around Germany. But he probably also was the source of its limitations to the extent that Luther’s Reformation is such a Germanic affair.

What was powerfully attractive to the people of the German cities and German princes was partly a strong nationalistic and anti-Italy tendency. In France, England, and elsewhere, there isn’t that much resonance for Luther after the first excitement dies down.

Luther’s Reformation is pretty much confined to a zone of German-speaking lands and those to the east and north where German commercial interests were strong. He is by far the least travelled and least cosmopolitan of the major reformers.

HDS: Luther was an important catalyst in the theological revolution that led to the formation and start of Protestantism, but what did he mean for the beginning of printing and mass communication?

AP: I think Luther offered print a reboot. Print had been fuelled in the 1450s by a whole range of false expectations. The boosters of print wanted more books for people like themselves. There was a great deal of humanist enthusiasm for printing, but it required many bankruptcies among the print fraternity before it becomes clear the established market for manuscripts doesn’t provide a sufficiently substantial market size for what the print industry is to become.

People understood that the future of print lies in smaller books, it lies particularly in work for the state. Being the printer for the local bishop or local ruler was often a lifeline. It depends on finding new buyers and Luther offered them new buyers. There were people buying these reform pamphlets who were previously not buying books, and now they were buying lots of them.

Printing was established in many parts of Germany. What I think happens is when this moment is passed, the printers managed to hold onto these readers by redirecting them to other types of small books. It’s no coincidence that the largest market for new genres such as news books is in Germany. It is in the age after Luther’s death when you first see the market for commercial printed news getting underway.

HDS: In addition to the Reformation, you’ve also written about the study of religious refugee communities in the 16th century in your book Foreign Protestant Communities in Sixteenth-Century London. Given the various conflicts around the world going on today, what similarities do you see taking place?

AP: When I started working on this, it wasn’t a big topic. There were not a lot of people working on immigrant communities in the early modern period. Looking back (and this is work I did 30 years ago) you do see many of the same contours you see today. The exiles then were much more welcome by the ruling elite than by people who felt their jobs were being threatened and would be taken. They were receiving sympathy as fellow religious worshipers, but elicited lot of suspicion.

There were a lot of anti-Dutch feelings, which involved a fair amount of stereotyping. People would say that the Dutch were dirty and squalid. If you look at it from Dutch side, they had a reputation for almost obsessive cleanliness at home.

In the 16th century, immigrant groups often settled in new homes very close to people from their own home villages. It is the sense of being overwhelmed that I think most frightened the indigenous population, and of course anxieties about employment. What I saw is a sort of equation. If the immigrant population is below 10%, it can be absorbed relatively easily. If it’s above 50%, it doesn’t cause a lot of problems because the newcomers begin to reshape the culture of their new home (Geneva is a classic example). It’s in the middle stage that you get the most significant problems. That’s when people remain a minority, but a very significant and evident minority.

However, there are differences. Certainly in Britain antagonism toward immigrants is often expressed in areas where very few are living. Here it seems to be largely fear of the unknown other. Antagonism doesn’t seem to be closely correlated with experience.

And there is one further critical difference. We have far more of a scapegoating culture now than was case in the 16th century. Back then, people had far higher experience of misfortune. People who were faced with misfortune would look inside themselves for causes. Misfortune was seen as God-given infliction. I don’t think that even in strongly Christian communities that that’s the case today. People are encouraged to look outside for the source of the problems; the result is a political culture characterized by a far greater degree of anger and resentment.