Media and climate change: A case to answer
20185
post-template-default,single,single-post,postid-20185,single-format-standard,theme-bridge,bridge-core-3.0.1,woocommerce-no-js,qodef-qi--no-touch,qi-addons-for-elementor-1.5.6,qode-page-transition-enabled,ajax_fade,page_not_loaded,,qode-title-hidden,columns-4,qode-child-theme-ver-1.0.0,qode-theme-ver-29.2,qode-theme-bridge,qode_header_in_grid,qode-wpml-enabled,wpb-js-composer js-comp-ver-6.10.0,vc_responsive,elementor-default,elementor-kit-41156 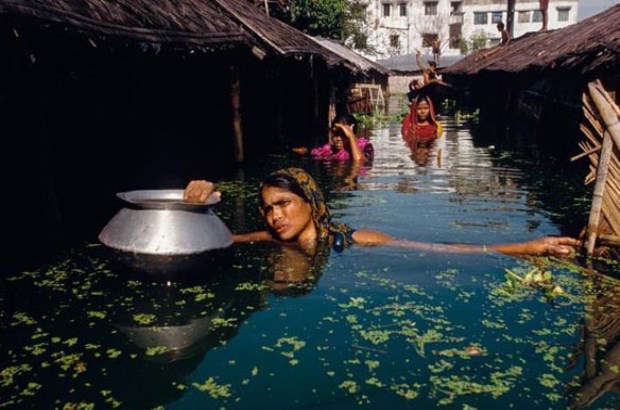 Flooding in coastal regions of Bangladesh has become an annual occurrence.

Buried in the recent highly scientific and rather impenetrable 2014 report of the Intergovernmental Panel on Climate Change (IPCC) are hints that the mass media of communication must help tackle public misunderstanding and fatigue around climate change.

The ICCP Report is necessarily technical. But it does observe that, “Information and communication technologies (ICTs) can help strengthen the physical preparedness of livelihood systems for climate change-related events. These can contribute to design of defences and determination of their optimal location, and make the livelihood system more robust.”

Picking up on the prevalence of community and social media, the Report says that, “By sharing observations and reflections through ICT tools, users foster new ways of assimilating or translating information, which can be shared through wider networks, and then influence action, enabling new experiments/practices to take place.”

The Mary Robinson Foundation – Climate Justice is one among many NGOs responding to the challenge of bringing about climate justice. Its mission is “To put justice and equity at the heart of responses to climate change, particularly those concerned with how best to respond and adapt to the challenge that it poses for the poorest and most vulnerable peoples of the world.”

It also aims to build a shared space for information and knowledge-sharing on climate justice which is accessible to all and a source of solidarity for those concerned about climate change.

The Foundation believes that the presence of a strong climate justice narrative from communities and NGOs to international opinion leaders and governments can create the political will, impetus and urgency for action on climate change. There can be no stronger narrative than story-telling about the impact of climate change on ordinary people.

Nevertheless, some voices are being left out of the debate. The ICCP Summary for Policymakers, for example, underlines that “Indigenous, local, and traditional knowledge systems and practices, including indigenous peoples’ holistic view of community and environment, are a major resource for adapting to climate change, but these have not been used consistently in existing adaptation efforts. Integrating such forms of knowledge with existing practices increases the effectiveness of adaptation.”

But it’s not just that some voices are being omitted. Information is also being deliberately manipulated for political or economic reasons. In 2007 UNDP published an occasional paper titled “Media Coverage of Climate Change: Current Trends, Strengths, Weaknesses.” It set out to provide a comprehensive survey of the role of the media in informing and communicating climate change.

The paper concluded that, “In some cases the media has been demonstrated to actually have played a role in hampering accurate communications about climate science to policy actors and the public via the media. However, in other cases the role of mass media in communicating climate science, mitigation and adaptation has been mixed or more positive.”

One problem is the tendency of mass media to report uncritically on the claims of climate change deniers as well as accusations made about their claims and motives. The ensuing finger-pointing plays into the conflict, drama and personalized stories that drive news consumption, but distracts attention from crucial institutional and societal challenges regarding climate change in relation to citizens’ lifestyles.

Then there is the politics of media ownership and control. In the USA, in 2013 an analysis by the non-profit Union of Concerned Scientists uncovered the accuracy of climate change coverage by three major networks – CNN, Fox News and MSNBC. Of the three, MSNBC was the most accurate, getting the science right about 92% of the time, while CNN followed with 70%. But Fox News came a distant third with a staggering 28% accuracy.

Media commentators have observed that Fox News Channel, part-owned by Rupert Murdoch, promotes conservative political positions and biased reporting. Interestingly, a study by the Australian Centre for Independent Journalism concluded that five News Corporation publications, also owned by Rupert Murdoch, accounted for most of the climate change scepticism in the country’s major newspapers.

How the science of climate change is communicated is a significant factor in public understanding of the issues involved and may well contribute to inertia around policies to tackle it. Clearly those responsible for content in mass media, community media, and social media can help redress any failings.