Posted at 23:34h in Media Development by wacc_kn 0 Comments 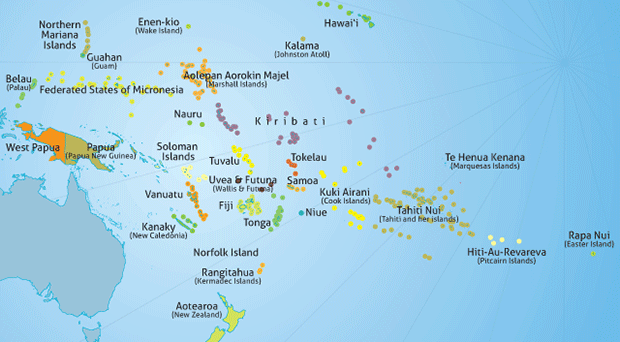 There are some 20,000 to 30,000 islands in the Pacific Ocean. Most of these Pacific Islands are collectively referred to as Oceania and are traditionally grouped into Melanesia, Micronesia, and Polynesia.

Micronesia means small islands. These include the Northern Marianas, Guam, Wake Island, Palau, the Marshall Islands, Kiribati, Nauru, and the Federated States of Micronesia. Most of these lie north of the equator.

Oceania’s islands are classified into two kinds: high islands and low islands. Volcanoes form high islands, which generally can support more people and have a more fertile soil. Low islands are reefs or atolls and are relatively small and infertile. Melanesia, the most populous of the three regions, contains mainly high islands, while most in Micronesia and Polynesia are low.

On 25 September 1513, Spanish explorer Vasco Núñez de Balboa became the first European to see the Pacific Ocean from the west of America. He called it Mar del Sur (South Sea) since he crossed Panama from North to South to reach it.

But it was the Portuguese explorer Ferdinand Magellan who named it the Pacific, having encountered its waters for the first time in 1521 on a particularly calm and peaceful day.

Covering 165 million sq km, the Pacific is larger that the entire land surface of the Earth and comprises half its water surface.

The only island kingdom in the Pacific is Tonga, made up of 176 islands under King Tupou VI.

Imperceptibly, and because of plate tectonics, the Pacific is shrinking about 0.5 sq km a year.

The Challenger Deep in the Mariana Trench plunges 10,911 metres, the deepest place on earth. If Mount Everest were put in Challenger Deep, its summit would be 2,000 metres underwater.

The point on earth farthest from land is in the South Pacific halfway between Pitcairn Island and Antarctica, 1,660 miles from land.

Most of the Islands of the world are found in the Pacific Ocean and most of them are found south of the Equator.

So much for the geography! Today, Pacific Island peoples and communities are facing unprecedented challenges to their economies and environment – at least some of them causes by the impacts of climate change.

Rising sea levels, tropical cyclones, floods and drought, combined with pressure from unsustainable fishing practices and coastal development, and modern consumption and production trends, are rendering the livelihoods of some 10 million people increasingly precarious. They are being forced to become migrants and refugees.

Despite great diversity across the Pacific islands – in terms of culture and economic structures – all of them face difficulties. These include narrow production and export bases, limited economies of scale, lack of diversification, and high fixed costs of government given the small size of their population.

Most nations are also heavily dependent on aid and their remoteness poses an additional constraint. For example, transportation costs are far greater when hundreds of islands are scattered across vast stretches of ocean. In short, Pacific Islands and their communities are vulnerable.

The theme of the Human Development Report 2014 is “Sustaining Human Progress: Reducing Vulnerabilities and Building Resilience”. It acknowledges that:

Vulnerability threatens human development – and unless it is systematically addressed, by changing policies and social norms, progress will be neither equitable nor sustainable.

Life cycle vulnerability, structural vulnerability and insecure lives are fundamental sources of persistent deprivation – and must be addressed for human development to be secured and for progress to be sustained.

Policy responses to vulnerability should prevent threats, promote capabilities and protect people, especially the most vulnerable.

Vulnerabilities are increasingly global in their origin and impact, requiring collective action and better international governance.

The Human Development Report 2014 goes on to point out that, “Development pathways that are not informed by voices of all stakeholders are neither desirable nor sustainable. But when societies create space for all voices to be heard, policymakers are more likely to be attentive to the concerns and needs of minorities and other vulnerable groups” (p. 83).

In the context of the Pacific, as articles in this issue of Media Development underline, journalists can play a key role in identifying and making public the global, national and local concerns and aspirations of vulnerable people and their communities. They can also tell success stories, and share knowledge and information that will contribute to greater resilience and long-term survival.

Of course, here as elsewhere, there are contentious questions of media ownership and control, and the accessibility and affordability of digital communications to address.

Just a few years ago, Internet access was limited in the Pacific, but it is now expanding quickly. As a result, use of social media is spreading – although unevenly – and many more people are gaining access to mobile telephone technology.

Together with web-based tools such as Facebook, Skype and Twitter, social media offer one solution to providing timely information to Pacific islanders, whether it be for awareness about natural disasters or something as simple as connecting rural farmers to their markets.

Democratizing all levels of communication – communication for all – can only help Pacific Island nations, their people and communities to resist, to survive, and to resume their rightful place in the region.