What’s in a name? In 1989, the ruling military junta changed the name of Burma to Myanmar, one year after thousands were killed in the suppression of a popular uprising. The change was recognised by the United Nations and by countries such as France and Japan, but not by the United States and the United Kingdom.

A statement at the time by the UK Foreign Office said, “Burma’s democracy movement prefers the form ‘Burma’ because they do not accept the legitimacy of the unelected military regime to change the official name of the country. Internationally, both names are recognised.” The European Union sat on the fence by adopting the compromise “Burma/Myanmar”.

The name “Burma” derives from the ethnic Burman (or Bamar) majority and, following local custom, was adopted by British colonialists in the 19th century. The more formal indigenous name “Myanmar” has been used for centuries in titles, literature, and official documents. The English language version of the 1947 Constitution, prepared the year before the country regained its independence, referred to the “Union of Burma”, while the Burmese language version used the name “Myanmar”.

Burma’s opposition movement clung to the old name as a protest against the military regime. The opposition said that it was a matter that could only be decided by the people. The name Myanmar is also controversial at another level. It can be traced back to the pre-colonial period when successive kings ruled the central lowlands of Burma and periodically clashed with the states and societies around them. It implies the continuing political dominance of the major ethnic group living within the geographical boundaries inherited from the British in 1948. This is a problem for many of the country’s ethnic nationalities.

To some, the use of either “Burma” or “Myanmar” represents a political position. To call the country Myanmar is deemed by activists to denote sympathy for the military regime. To the government, continued use of the country’s former name is considered insulting. Yet, many who preferred to use “Burma” after 1989 did so without such connotations, arguing that “Burma” is more easily recognised than “Myanmar” and lends itself to the adjective “Burmese”. Myanmar does not have an equivalent adjective in English. 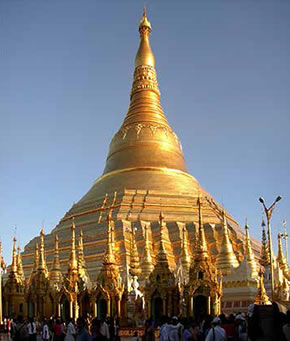 The Shwedagon Pagoda in Yangon, Burma, is a Buddhist shrine. According to legend, it has existed for
2,600 years, making it the oldest pagoda in the world. Photo: Ralf-Andre-Lettau.

Such linguistic tensions are symptomatic of Burma’s inner turmoil, a country of over 51 million people with 135 distinct ethnic groups speaking 11 languages. The Bamar form an estimated 68% of the population; the Shan 10%; the Kayin 7%; the Rakhine people 4%; and overseas Chinese approximately 3%. They prefer the term “ethnic nationality” to “ethnic minority” as the term “minority” deepens their sense of insecurity in the face of what is often described as “Burmanisation” – the proliferation and domination of the Bamar culture over other groups.

And then there are the Rohingya, a relatively small ethnic group who practice Islam and whose origin is disputed. Some say they are indigenous to the state of Rakhine and others contend they are migrants from East Bengal, today’s Bangladesh, who came to Burma during the period of British rule. In 2012 riots took place between Rohingya and Arakanese in northern Rakhine State. The government responded by imposing curfews, deploying troops in the region, and declaring a state of emergency allowing the military to oversee the administration of the region.

In July 2012, the Burmese government omitted the Rohingya – since 1982 classified as “stateless Bengali Muslims from Bangladesh” – on the government’s list of more than 130 ethnic races. The government said that the Rohingya have no claim to Burmese citizenship.

At a press conference in November 2014, opposition leader Aung San Suu Kyi was asked for her assessment of Myanmar’s reform process. “Stalled,” she replied, before challenging anyone in the room to name a significant change that had taken place in the previous two years. Commentators concur with the view that the pace of political change has slowed since the early reforms introduced when Thein Sein became President in 2011.

At that time, many political prisoners were released, censorship of newspapers and the Internet was lifted and a (flawed) law passed allowing public demonstrations. In a short period of time, control over one of the world’s most tightly controlled societies was relaxed. Private newspapers regularly carried stories of demonstrations – mostly connected to land rights – and criticism of government ministers.

But that thaw has not continued and many believe that the real objective is to leave the army in charge of a nation but with the appearance of it being more democratic yet subject to the same old constraints. One key frustration is that the country’s Constitution has not been rewritten.

Drafted in 2008, the current Constitution guarantees the military a quarter of the seats in the Hluttaw (the Burmese parliament). Opposition leaders have focused on two Articles they want removed: the clause barring anyone who has foreign family members from becoming president (which effectively prevents Suu Kyi from standing) and Article 436, which gives the army a veto on constitutional changes.

Altering the “Suu Kyi clause” has been dismissed outright as a “threat to national sovereignty”, while amending Article 436 will be discussed in parliament, although if the army remains opposed there is no way it can be changed. Nevertheless, senior leaders are said to be discussing possible compromises.

Then there is the issue of equal rights for minorities. Ever since independence (1948), Burma has never been truly at peace, with minority ethnic groups fighting guerrilla wars against the Burman-dominated state. The last three years have seen progress towards a nationwide ceasefire agreement to which all the major rebel groups were drawn by the promise of dialogue about a more inclusive future. But recently clashes have begun again.

Print and broadcast media in Burma have faced strict censorship and regulation since the March 1962 military coup d’état. The Constitution provides for freedom of speech and the press, but in practice the military government prohibited the exercise of those rights. After the coup d’état, journalists responded by forming the Burma Press Council to protect press freedom. Within a month, however, several journalists had been arrested and publications shut down. By 1988, the number of newspapers had decreased from 30 to eight and the media gradually became the mouthpiece of the military junta.

On 20 August 2012, Burma announced that it would stop censoring media before publication. Newspapers and other outlets no longer had to be approved by state censors, but journalists in the country could still face consequences for what they wrote or said. On 4 March 2014 Burma’s Parliament formally approved two laws to regulate the country’s media, which lawmakers said would extend press freedom despite leaving media licensing in the hands of the Ministry of Information. Easing restrictions is one example of reform undertaken by the quasi-civilian government of President Thein Sein, but media freedom advocates have warned that recent moves by the government threaten those gains, which they say must be enshrined in law.

ARTICLE 19, the human rights organisation dedicated to promoting freedom of expression and information, analysed the 2014 “Printing and Publishing Law of Myanmar” in the light of international standards on freedom of expression. The new Law represents a step forward compared to its draconian predecessor of 1962. It no longer facilitates prior censorship, and the penalties imposable under it are relatively modest. Oversight of the printing and publishing sector has been partly transferred from the government to the courts.

However, ARTICLE 19 questions if a specific law to regulate the printing and publishing sector is needed at all, since its primary impact is to create a series of bureaucratic formalities such as registering with the Ministry of Information and sending it information on the import and export of publications. While these procedures are less problematic than those under the 1962 law, it is not clear why they are necessary.

In the early hours of 5 August 2013, Burma completely disappeared from the worldwide Internet. A total outage followed a series of problems with the power supply to the terrestrial cables, disrupting the connection to the country’s undersea link on and off for two weeks and causing the country’s normally slow Internet service to grind almost to a halt.

One of the main factors dragging down Burma’s Internet is that there is simply not enough capacity or bandwidth on the domestic network and international connections to support the amount of people going online. However, conspiracy theories abound, from suspicion over why problems seem to occur every year near the anniversary of the 1988 democracy protests to claims that the government deliberately slows the Internet down.

In 2011, Freedom House ranked Burma’s Internet policies as the world’s second most repressive – surpassed only by Iran, and in the same league as China and Vietnam. To keep citizens in the dark, Burma’s government routinely restricted Internet access and censored large amounts of online content, including most foreign media. Those who defied them faced severe penalties.

In 2012, the government unblocked most previously banned content, including the websites of outlets that frequently criticized the regime, and stopped requiring journalists to submit content to government censors before publication. Today, those that can afford access can see whatever they want online. Exiled news organisations have moved into Yangon, their online presence now accessible from within the country. Webmail and social media, once blocked, are increasingly popular despite low Internet penetration. Facebook is home to most of the country’s million or so Internet users – although just 2% of the population.

Burma’s transition to greater democracy is proving a test case for communication rights in practice. If the government is serious about unifying and reconciling its different peoples and allowing them a voice in policy-making, it will have to grant them open access to media platforms that enable them to express their opinions and to raise issues of public concern.

The Burmese people may find inspiration for their ongoing struggle in the Burmese journalist and politician Win Tin (photo left by Soe-Zeya-Tun), imprisoned by the military government in 1989 for his critical writings and for taking up a leadership position in the National League for Democracy. After his release in 2008, Win Tin continued to wear his blue prison shirt “because my friends were still in prison, and I feel that the Burmese people, as a whole, are still in prison.”

Win Tin died on 21 April 2014. While incarcerated, he had written on the wall of his cell, “As long as the black stripes on the yellow background are painted vividly enough, the tiger is still a tiger.” It’s a warning the Burmese people understand very well. But can the tiger change its stripes?