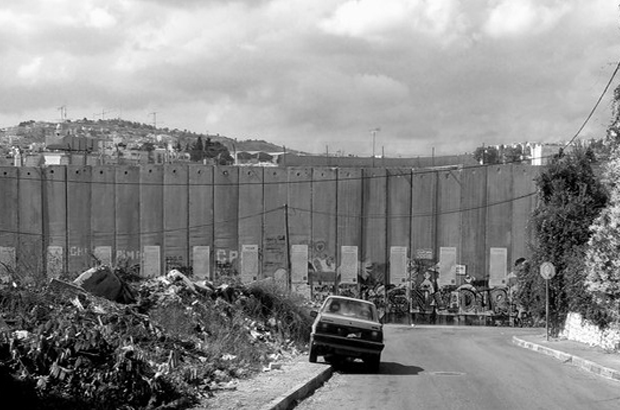 The World Council of Churches’ World Week for Peace in Palestine Israel, 20-26 September 2015, invited people to advocate for an end to the illegal occupation of Palestine.

“Something there is that doesn’t love a wall” is the first line of a famous poem by Robert Frost published in 1914. In “Mending Wall”, the narrator, a New England farmer, contacts his neighbour to rebuild the stone wall between their two farms. As the men work, the narrator questions the purpose of a wall “where it is we do not need the wall”. Twice he points out that walls are generally disliked, despite his companion’s assertion that, “Good fences make good neighbors”.

The Great Wall of China, Hadrian’s Wall in England, the Berlin Wall, the concrete barrier between Israel and the West Bank, the wall on the US-Mexico border, and most recently the barbed wire fence between Hungary and Serbia are instances of physical barriers intended to contain, to keep in or out, and to prevent migration. Then there are the uncompromising barriers erected by the global economy in a world where, in developed and developing countries alike, the rich control 90% of the wealth.

There are more sinister and lethal “walls”. The longest continuous minefield on the planet is a militarized zone in Western Sahara running for 2,700 kilometres and dividing the Sahrawi people. In 1975, Spain ended more than 90 years of colonial rule of Western Sahara after decades of a violent Sahrawi independence movement. When the Spanish left, Morocco sent 350,000 settlers and 20,000 troops into the territory, starting a war that lasted 16 years.

Sahrawis fought under the flag of the Polisario Front, supported by Algeria and Libya. Morocco was backed by France and the United States. Tens of thousands of people died and more than 100,000 were displaced. As Morocco settled the Atlantic side, it built a wall down the middle of the territory to keep Sahrawis and the Polisario Front in the eastern desert. The wall consists of a series of sand berms (ridges) fortified with Moroccan soldiers and landmines. It is still there.

Less immediately obvious are the social, cultural, and psychological barriers to better understanding between peoples and communities. Many of these impediments are directly related to communication – from linguistic barriers to media misrepresentations – demanding what the Latin American scholar Jesús Martín-Barbero calls the reconstruction of local meanings: listening “to everything that speaks, screams, curses, makes noise, blasphemes, at the same time as it inaugurates, invents, energizes, liberates, emancipates, creates.”1

A simple definition of communication is precisely the creation and exchange of meaning in common. A more complex definition includes traditional media, social media, digital media and their associated industries. Communication is multi-layered and, in societies fashioned by media (where all is not as it seems), there are numerous obstacles and challenges.

The theme of this issue of Media Development is “Invisible Walls and Barriers” and its aim is to explore some of the political, social, cultural and technological impediments to freedom of expression in today’s world. Some barriers are more obvious than others. Indigenous people and their communities have been denied access to communications and excluded from discussion tables at international and national levels. The voices of refugees and migrant workers are not often heard by policy-makers. And in the world’s news media, women are often rendered invisible – which has been the focus of a 20-year-long study carried out by WACC’s Global Media Monitoring Project.

As with many countries in the global South, Afghanistan has suffered political trials and tribulations for a number of decades. But also embedded in Afghan society and culture are religious ideological barriers – as Mina Saboor reveals in her article in this issue of the journal. “Cases of media censorship and regulation become particularly complicated when religious scholars intervene in determining whether media content is Islamic or un-Islamic. … Conservative groups advancing these notions tend to use religion as an ultimatum,” she writes.

And then there are young people who, in today’s world, often face apparently insurmountable barriers and yet display astonishing resilience and creativity. Addressing an audience of young people in the Town Hall, Belfast, Northern Ireland, on 17 June 2013, President Barack Obama told the story of a wall that divided the city’s Alexandra Park.

The barrier was erected in 1994 and is one of a number of so-called “peace walls” built within the city in attempt to prevent violence between Nationalist/Republican and Unionist/Loyalist communities.

President Obama praised the initiative of a young woman named Sylvia, who campaigned among local communities to build a gate in the wall that would allow people free access. In September 2011, the campaign achieved its goal. Obama commented:

“A small bit of progress. But the fact that so far we’ve only got a gate open and the wall is still up means there’s more work to do. And that’s the work of your generation… We’ll need more of you, young people, who imagine the world as it should be; who knock down walls; who knock down barriers; who imagine something different and have the courage to make it happen. The courage to bring communities together, to make even the small impossibilities a shining example of what is possible.”

As the articles in this issue of Media Development underline, traditional mass media and today’s social media can play an important role in breaking down barriers and in creating better understanding between communities, societies, and nations.