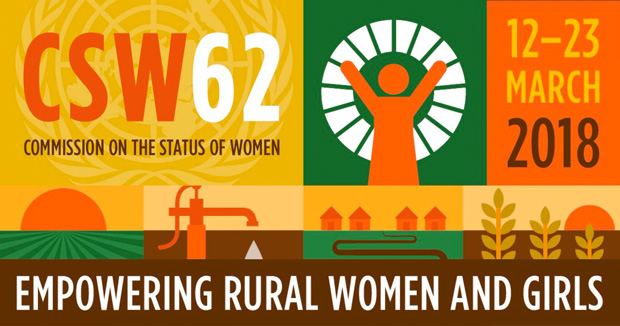 The 62nd session of the Commission on the Status of Women (CSW) will take place at the United Nations Headquarters in New York, 12-23 March 2018.

The CSW’s priority theme will be “Challenges and opportunities in achieving gender equality and the empowerment of rural women and girls.” In addition, there will be a review theme titled “Participation in and access of women to the media, and information and communications technologies and their impact on and use as an instrument for the advancement and empowerment of women.”

The Beijing Fourth World Conference on Women (1995) underlined the urgency of advancing gender equality in the two strategic objectives of Platform J: to increase the participation and access of women to expression and decision-making in and through the media and new technologies of communication; and to promote a balanced and non-stereotypical portrayal of women in the media.

The 47th session of the Commission on the Status of Women (2003) stressed the need for media and telecommunications companies to address gender-based discrimination. In 2005, the Outcome Documents of the World Summit on the Information Society (WSIS) noted the need to “promote balanced and diverse portrayals of women and men by the media” and stated:

“We recognize that a gender divide exists as part of the digital divide in society and we reaffirm our commitment to women’s empowerment and to a gender equality perspective, so that we can overcome this divide… We encourage all stakeholders to support women’s participation in decision-making processes and to contribute to shaping all spheres of the Information Society at international, regional and national levels.”

Even so, in its paper “Rights Should Be Central To Post-2015 Development Agenda”, Human Rights Watch (HRW) identified “Strengthening the rights of women and girls” as one of five specific areas requiring more robust commitments by governments. Specifically, HRW proposed that:

“The post-2015 agenda should promote gender equality and women’s rights, including a requirement on governments to work to end gender discrimination and promote equality in their laws, policies, and practices.”

Recently, the centrality of this agenda was reaffirmed in debates and initiatives at the international level. These included the Global Alliance for Media and Gender (GAMAG); the United Nations Women Global Compact “Step it up for gender equality in the media”, UNESCO’s Gender Sensitive Indicators for Media, the UNESCO University Network on Gender Media and ICT, and a number of advocacy and scholarly contributions to the debate.

WACC’s own Strategic Plan 2017-2021 includes the goal “To support civil society in the Global South to combat sexism in the media.” In part, WACC does so through its acclaimed Global Media Monitoring Project (GMMP) and other initiatives that generate evidence on the gender dimensions of news reporting. Monitoring findings are applied to awareness creation, critical media literacy training, advocacy, and engagement with media professionals on media policy and practice.

The articles in this issue of Media Development are shortened versions of some of the position papers prepared by the Global Alliance on Media and Gender (GAMAG) to be presented to the 62nd session of the Commission on the Status of Women (2018). However, while gender equality and equitable participation in – and access of women to – the media and to information and communications technologies can undoubtedly be achieved by women alone, it will happen much more quickly and effectively if gender equality were recognized by men as a task for them as well.

As the American feminist and political activist Gloria Steinem has affirmed, “A gender-equal society would be one where the word ‘gender’ does not exist: where everyone can be themselves.”