Posted at 14:39h in Media and Gender Monitor, News by Staff 0 Comments 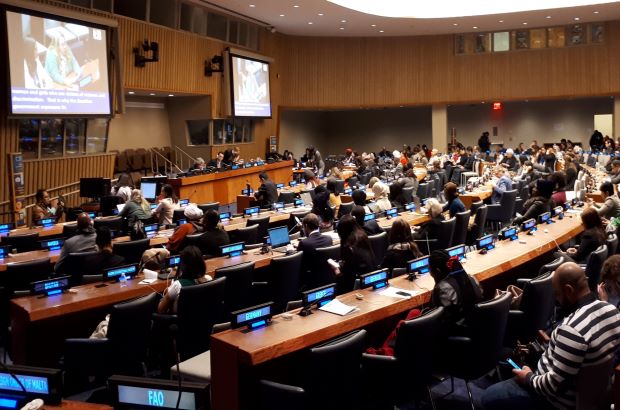 The global commitment to end gender inequality will not advance unless attention is also given to achieving gender parity in media and communication, WACC’s Sarah Macharia told a high-level dialogue at the 63rd session of the Commission on the Status of Women at the UN headquarters in New York City March 13.

“Media are key agents in the socialization process, the process through which we internalize the norms and ideologies of the societies in which we live,” said Macharia, WACC program manager for Gender and Communication and for Monitoring Rural Poverty Reporting. “Young people spend more time interacting with media than with any other socialization agent. In Kenya, for instance, teens spend 70 hours a week in front of TV and mobile phone screens and just 40 hours in school.”

And yet, she said, “much of current efforts to tackle gender inequality are directed to tangible drivers of inequality such as disparities in education and employment.”

Macharia noted that gender equality reports in the last five to 10 years have identified social and cultural norms as factors that hinder progress towards ending gender inequality.

The role of media in advancing gender equality is also mentioned in Goal 5 of the UN’s 2030 agenda, said Macharia. Media are alsov “implicated in the achievement of all the other goals, for instance, the removal of social barriers to the empowerment of girls and women,” she added.

“In our Beijing +25 review we make the case that media and communication deserve attention in order to increase the likelihood of breaking through the impasse and accelerating the pace of change in all development areas,” said Macharia.

Macharia also gave an update on WACC’s Global Media Monitoring Project (GMMP), a worldwide longitudinal study on the representation of women in the world’s media, which began in 1995. The 6th research in the series is scheduled for 2020.

“In 2020 we will convene to update the evidence and learn how much closer we are to the goals expressed in Beijing,” she said. “To put this into perspective, in 2015 we found that the pace of change had slowed down considerably. At the time, we were more than three quarters of a century away from gender parity on the key indicator; the estimate of the time period left to equality had more than doubled.”

Macharia took part in the high-level dialogue entitled, Accelerating implementation of the Beijing Declaration and Platform for Action: exchange of best practices in preparation for the Beijing + 25 review and appraisal. Other participants included government representatives, parliamentarians, civil society and women’s organizations, representatives of UN bodies, the private sector and the media.

Adopted in September 1995 at the Fourth World Conference on Women, the Beijing Declaration and Platform for Action is a global commitment to achieving equality, development and peace for women worldwide.

Photo above: The 63rd session of the Commission on the Status of Women at the UN Headquarters in New York City.