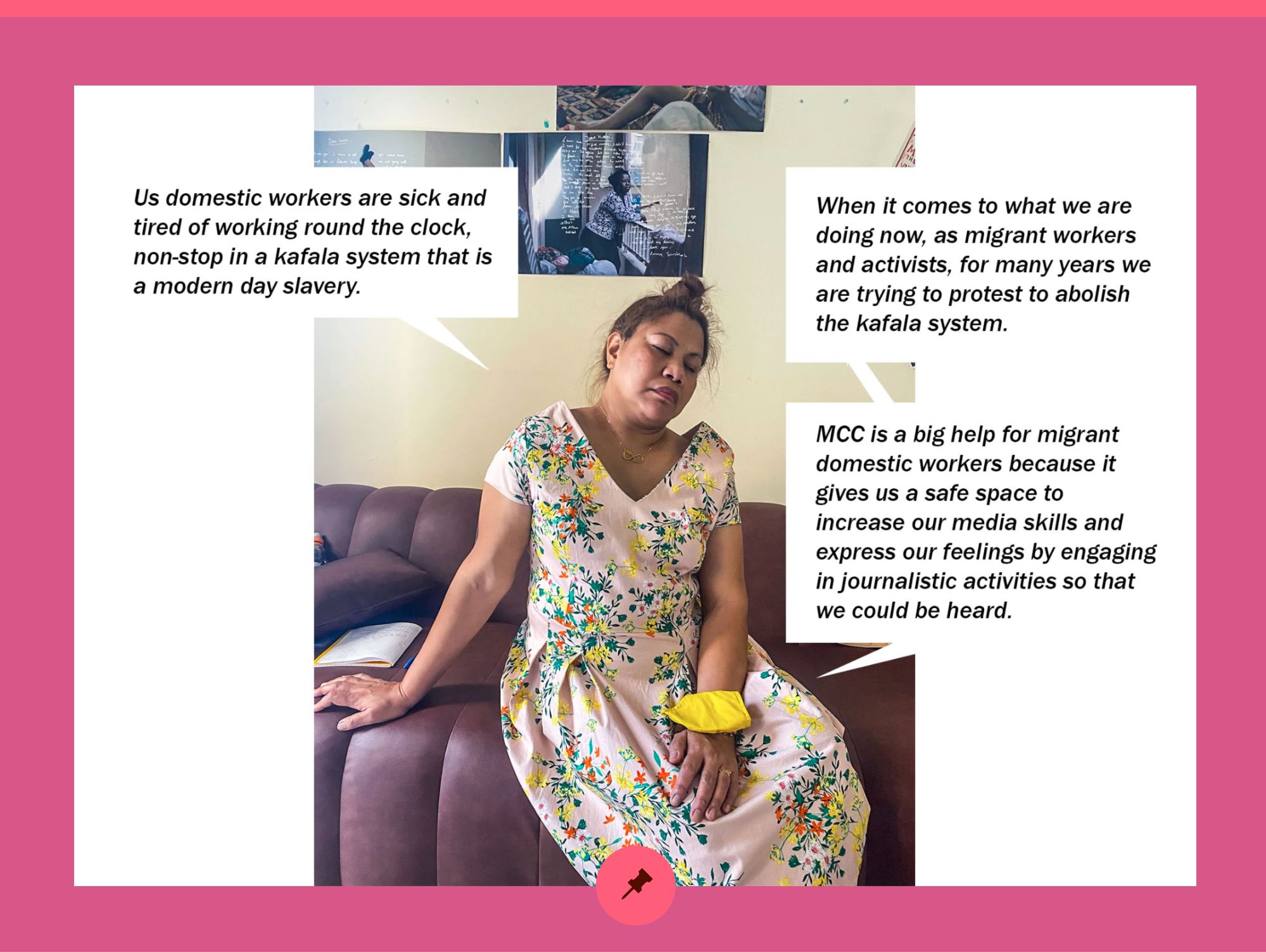 “Domestic workers are sick and tired of working round the clock, non-stop in a kafala system that is modern day slavery.”

This was one of the sentiments raised in Hear Us, a photo essay by migrant workers in Lebanon who participated in a series of citizen journalism trainings as part of a WACC-supported project implemented by the Anti-Racism Movement’s (ARM) Migrant Community Center (MCC), a Beirut-based civil society organization.

“According to migration and communication rights activists, Lebanese media often publish news that reflect bias towards migrant workers in the country, the majority of whom are women from countries such as Ethiopia, Sri Lanka, and the Philippines,” said Lorenzo Vargas, WACC programme manager for Communication for Social Change.

News reports tend to misrepresent the needs and rights of migrant worker, he said. “This occurs in a legislative context where systemic racism, sex discrimination, and gender-based violence are upheld through the Kafala (or sponsorship) system. Media coverage tends to deny migrant workers’ agency by privileging the perspectives of government officials, police, and sponsors.” [See related story, Negative portrayals of migrant workers on the rise in Lebanese news]

The project sought to establish a Migrant Workers’ Newsroom that would “enable migrant workers to challenge dominant discourses around migration,” said Vargas.

At least 69 migrant workers, 50 of them women, benefitted from trainings on multi-media journalism, social media, photography, videography, podcasting, video editing, strategic communications, and media bias, which were conducted in 2021. ARM noted that at the start of the training, many participants’ computer literacy was very low. “We were teaching them from scratch, like how to use the mouse.”

“MCC is a big help for migrant domestic workers because it gives us a safe space to increase our media skills and express our feelings by engaging in journalistic activities so that we could be heard,” said one participant.

Viany Djouffa, another participant, said the training was useful to him and his plans to create an organization that will bring together migrants from Afrique Noire (Black Africa). The Adobe Photoshop training “allowed me to develop my creativity and the possibilities of crafting different posters to promote this organization,” he said, adding that he now feels “more confident going forward” with its launch.

All trainees were interested in attending more workshops in the future, said ARM in its project report to WACC. The most common suggestions were for more trainings on social media (Facebook, Instagram), English language classes, and additional photography/videography classes.

ARM said the project has “seriously shifted the perception on media, advocacy, and the news among migrant communities at MCC” and has had a positive impact on its ongoing programs.

It noted that 22 out of 24 attendees in a training program ” felt more connected to people from different migrant communities after the trainings. This is an important insight about what is achieved through these trainings beyond technical skills.”

Lebanon began opening its doors to migrants in the 1970s under the “Kafala” or sponsorship system, which defines the relationship between foreign workers and their local sponsor-employer. Kafala also applies to thousands of displaced Syrians in Lebanon, who require a sponsor to work even in informal jobs such as grocery workers, delivery workers or construction workers.
Before Lebanon’s financial meltdown in 2020, there were over 400,000 migrant workers, more than half of whom were employed as domestic workers. Today, there are about 207,000 migrant workers coming mostly from Ethiopia, Bangladesh, Egypt, Sri Lanka, and Sudan, according to Media Monitoring Report: Analyzing News about Migrant Workers in Lebanon, published by the IMRT as part of the project.

ARM and other human rights groups have been calling for the dismantling of the Kafala system, which they liken to slavery and human trafficking. For instance, migrant workers who leave an abusive employer or are fired must leave the country otherwise they will be arrested and/or deported.

In 2021, “the running away charge has been replaced by a simple declaration that the worker ‘left her/his place of employment, which is no longer considered a criminal charge,” said the IMRT report. However, the Lebanese Code of Labor exempts migrant domestic workers or “domestic servants employed in private households” (Article 7) because domestic work is not recognized as labor, “thus, they have no right to unionize or to a minimum wage,” it added.

Reforms were also introduced to the Kafala system, including a non-enforceable template contract that suggests a minimum salary and allows workers to unilaterally end their employment with a one-month notice, said the IMRT report. However, the ARM said the lack of enforcement mechanism “renders these reforms performative and useless.”
Furthermore, “the ideologies that maintain the exploitation of migrant workers in Lebanon such as racism, sexism, xenophobia, and scapegoating are reproduced within media coverage of the Kafala system and migrant workers,” said ARM. This has become even more pronounced with the deepening economic crisis in Lebanon.
Migrant workers are often portrayed as inferior or weak by the news media, said the IMRT report.

First of many steps

“The project was initially intended as a public-oriented effort, to improve media production, inform policy makers, and impact public opinion, especially considering the context during the lifetime of the activities, as migrants were of the most affected by the worsening social, economic, and political crises in Lebanon,” said ARM in its report. “The efforts were redirected inwards at the early stages of the project, as the need to foster a culture of media critique and reclamation and collective storytelling and knowledge production was prioritized.”
The project’s focus shifted because “engaging the public and policymakers became a challenge for the project due to the political and economic situation in Lebanon,” said Laure Marakem, ARM operations manager in an email interview. “For example, getting out to policy makers was challenging because Parliament was not meeting and there was a fuel shortage.”
ARM added that participants were introduced to novel methods of media production, as well as alternative approaches to working with (and playing with) newsroom equipment, “which fostered interest, dialogue, and the keenness to train, network, and mainstream the project in the everyday community-organizing and advocacy work led by migrants.”

This project is “the first step of the many that will be needed to empower migrant population and advance a rights-based narrative of migration,” said ARM.

Marakem said more training sessions will be held to produce “more strategic content that is directed to media makers and the public.”

Above: Photo taken as part of a photo essay training by the Community Media Centre