27 May 2015 Myths of radicalization in Britain 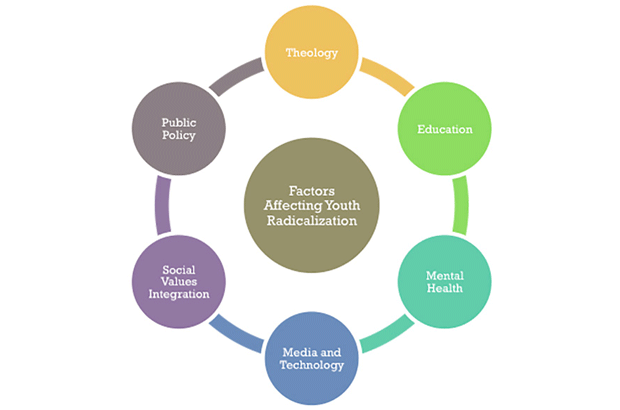 The latest buzz word in the “war against terror” is leading us down a blind alley, argues Jeremy Seabrook. It epitomizes a line of thinking that will do little to stop young people seeking purpose in religious fundamentalism.

Media and political discussion about how young Muslims in Britain – and not only men – are “radicalized” is characterized by the same shallow ineptitude that marks our engagement with Islam in the rest of the world. “Radicalization” is assumed to mean “the making of terrorists”. It does not. There is a long ideological continuum in every totalizing belief-system, secular and religious.

Although the precise order of the stages in the process may be disputed, the many variations suggest a more complicated situation than a belief that exposure to one preacher in a mosque on a single occasion may turn otherwise “normal” young men into violent antagonists of their own country.

We have been haunted by a “with-us-or-against-us” mentality, by tales of “extremists” and “moderates”, “hawks” and “doves”, “hard-liners” and those we “can do business with”. This simplistic division obscures more subtle realities. In any religious ideology, there are the committed, the observant, the pious, the devout, the orthodox, the ultra-orthodox, the intransigent, the extremist; none of whom can be predicted to commit outrages on the streets of Britain or to rush to Syria or Iraq to join the ghoulish legions of ISIS.

Passing between these different states of mind does not render the individual incapable of abiding by the laws of the land and leading life as a blameless citizen. Indiscriminate use of the word “radicalization” is likely to produce the very effect it is supposed to inhibit.

A deeper problem lies at the heart of stillborn discussions which insist that thousands of young Muslims are in danger of imminent estrangement from their own families, communities and country.

The story runs like this: there they are one minute, pursuing a life which – whether they are in work or not – revolves around football, sex, alcohol and perhaps petty crime; while the next, “radicalized” by some charismatic preacher, they reappear in the fancy dress of martyrs, threatening to give their lives in solidarity with their kin in parts of the world with which they have none but a confessional connection.

Somewhere, in the panic over alienated Muslims, and the threat of terror posed by an unknown number of returnees from battlegrounds in Syria, Iraq or Somalia, there is also a deep fear, not only of why a destructive, but apparently beguiling, ideology may alienate them from Britain, but also of how life here might cause them to repudiate it so vehemently.

The secular paradise promoted by the West may be no more substantial than the spiritual one projected by any religion into the hereafter and may not offer a satisfactory life to young people – particularly when it is accompanied by unemployment, casual work, public odium, discrimination and stereotyping.

The young have always been animated by a restless need for improvement, a better world, an advance from the sad disappointments of what has gone before. They are now told that this is the best of all possible worlds, and it has been brought to such a state of perfection that nothing they can do will make the slightest improvement to it.

If the distorted heroics of “jihadis”, apparently streaming from Europe into a chimerical “caliphate”, are characterized by nihilism and a perverse desire for martyrdom, we should also ask questions about the nature of the values of a Europe, with its culture of perpetual escape offered as a consolation for cancelled idealism and annulled hopes for social justice and political change.

Consciousness of this void at the core of what still likes to promote itself as “the cradle of civilization” is, apparently, so unbearable that relief from it must be sought constantly – in alcohol, drugs, travel, money, gambling, sex, speed and violence in film, TV and on social media. If the monstrosity of ISIS seduces anyone, this says a great deal about the state of mind produced here, at home.

Those who go off to fight for a transcendent cause – no matter how vain or illusory, whether against President Assad or as soldiers in the service of some crazed other-worldly project – do so in part as a response to the alternatives offered to themselves and their peers, who are resigned to getting smashed, wasted, out of their skull and legless.

Such horrible images mirror as metaphor the ugly casualties of war, to which some have literally taken themselves in a doomed search for purpose. And that is before we even begin to look at the graphic violence of the so-called entertainment industry, from which ISIS and its propaganda machines seem to have taken considerable inspiration.

It cannot be stated too strongly that it is the responsibility of government to protect its people. But it soon becomes clear that there is one rule for those who find some kind of bloody relief for their aggression, frustration – or whatever it is – in their own country, and those who follow the menacing banners of religion to whatever grisly battlefields of the imagination it may lead them.

When someone goes on a shooting spree in a school or a mall in North America, or against political opponents, like Anders Breivik; when the thousands of annual casualties of US gun crime are followed to their sad graves, when Saudi student Nahid Almanea is knifed to death in a park in Britain, the concerns raised are different.

This is the work of crazies, deranged individuals, and society has no part in creating them. There is a set of laws for criminal actions apparently inspired by Islam and another for those produced by the pathologies of “our” society.

The Briton interviewed on Radio 5 Live who said he would not return to the country until “the black flag of Islam” was flying over Buckingham Palace and 10 Downing Street is clearly living in a nebulous world of fantasists, yet is treated as a spokesperson for what Deputy Prime Minister Nick Clegg called “a medieval, violent, revolting ideology”.

There was no such public panic after the many (mostly foiled) copycat attacks following the US Columbine high school massacre in 1999. Among those attempting to emulate Eric Harris and Dylan Klebold were a neo-Nazi sympathizer in Loughborough, two students in greater Manchester, a 21-year-old in Mallorca, an Argentinean, an Australian, and scores of individuals in the US. Of 12 “rampage” shootings between 1999 and 2007, eight directly claimed “inspiration” from Columbine. Not only were these people not described as “representing” anything at all, but publicity was muted, for fear of provoking similar macabre mimicry.

What all this amounts to – both in the exaltations of religious violence and in secular acts of brutality – is evidence of the suggestibility of many young people. Suggestibility is a condition of mind originally created by commerce to make young people receptive to the latest must-have accessory, object or technological novelty.

Like so much else, this has run dangerously out of control, and has permitted aberrant and destructive ideas to take root in the fallow fields of consciousness, the abandoned spaces of idealism, hope and purpose.

The custodians of our safety are always asking for “a tightening of state monitoring power”. In 2014 Richard Barrett, former head of counter-terrorism at MI6, said: “Although there is no linear projection from foreign fighters to domestic terrorists, it is inevitable that a number will fall into this category.” There is no doubt truth in these sober words; but that number is not going to be reduced by the maladroit approach of those whose task is to “keep us safe”. The greatest agent of what is glibly called “radicalization” is not social media or exposure to wild preaching, but direct experience.

This is true of all movements that cause people to question accepted social and moral assumptions, whatever their subsequent response – whether considered political commitment or flamboyant heroics of warfare on behalf of a gruesomely seductive ideology.

To diminish the estrangement of some people from their country of birth or adoption, a more ample understanding of the mutations of faith is required, as well as more critical insights into the society in which we must all make our home. Yet these are approaches unlikely to be considered by those who speak of “stamping out”, “degrading” and “destroying” terror.