Narratives of exclusion and the “other” in Spanish political communication
20792
post-template-default,single,single-post,postid-20792,single-format-standard,theme-bridge,bridge-core-2.1.9,woocommerce-no-js,ajax_fade,page_not_loaded,,qode-title-hidden,side_area_uncovered_from_content,columns-4,qode-child-theme-ver-1.0.0,qode-theme-ver-20.6,qode-theme-bridge,qode_header_in_grid,wpb-js-composer js-comp-ver-6.2.0,vc_responsive

Posted at 19:48h in Media Development by Karen B. Sanders 0 Comments 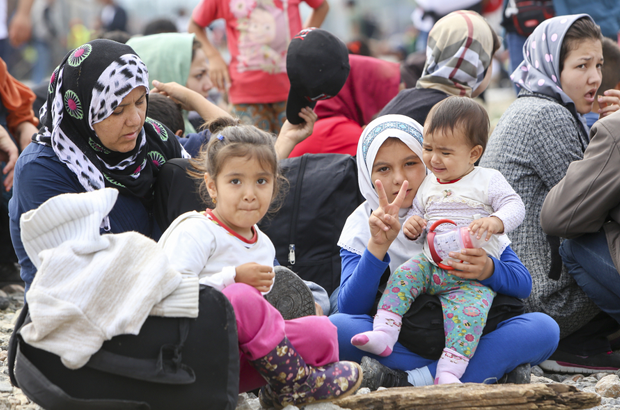 Idomeni, Greece – September 24 , 2015: Hundreds of immigrants are in a wait at the border between Greece and FYROM waiting for the right time to continue their journey from unguarded passages. Photo: Ververidis Vasilis / Shutterstock.com

In the summer of 2015, distressing scenes of refugees and migrants from Syria, Afghanistan and a number of African nations began to dominate Europe’s headlines. The image of the drowned three year-old, Aylan Kurdi, lying face down in the Turkish sand, became the tragic icon of refugee suffering. Initially Germany and Croatia welcomed the migrants but as the numbers increased, political and public opinion grew more hostile. The Hungarian government set about erecting a physical barrier across its borders with Serbia, determined to prevent migrants entering their country.

The increasing numbers of migrant inflows are a feature of the post-colonial and Cold War Europe. These inflows have been accompanied by the growing strength of so-called “populist” right-wing political parties such as the United Kingdom Independence Party (UKIP), the Danish People’s Party and Le Front National in France. Concern about immigration or outright hostility to it are integral to their political rhetoric.

Spain too has experienced significant increases in immigrant inflows in a relatively short period of time. From constituting 1.3% of the total population in 1996, immigrants constituted 12% of the total population of Spain by 2012, an influx of 5.7 million people in little over a decade. But Spain appears to be an interesting outlier to the overall trend of the development of right-wing populism. Left-wing populism, which embraces migrants and refugees, appears to be more prevalent. However, the themes of exclusion and scapegoating may be just as present in Spanish populism as they are in more right-wing versions.

Immigration and politics in Spain

The beginning of the 2008 economic recession, leading to 27% Spanish unemployment in 2013, together with generally negative media representation of immigrants provided conditions that might have been supposed to lead to support for right-wing, anti-immigrant politics as seen in other European countries in similar circumstances. From 2000 onwards, immigration has consistently been listed as among the first five principal problems that most worry Spanish citizens and opinion poll data suggest that anti-immigrant attitudes are similar to those in other European countries.

Studies of media representations of immigrants showed that immigrants were seen on the whole as a problem for Spanish society, linking them to problems of crime and poverty. However, negative public attitudes did not translate into the development of or widespread support for populist radical right-wing (PPR) or extreme right-wing parties. Whereas in many European countries these parties have become the mouthpiece for the politics of disillusion and protest, in Spain populist right-wing parties have achieved no widespread electoral support, a singular status shared with Portugal.

Since Spain’s democratic transition between 1975 and 1982 after 36 years of General Franco’s dictatorship, the political landscape has been dominated by the centre-right Populist Party and the centre-left Socialist Party. A new party, Podemos [We Can], emerged from Spain’s indignados movement (“the outraged”) who in 2011 began a series of protest meetings calling for more participatory politics and the end of austerity policies.

First registered in March 2014, the party was founded in the midst of recession, corruption and the growth of Catalan demands for independence. Podemos positioned itself against the ruling “ruling class or caste” (la casta) who sought to defend their own narrow interests against those of the people. Their constant appeals to the people and repudiation of a corrupt elite prompted many commentators to suggest that Podemos exemplified a kind of left-wing populism, albeit one which did not share the right-wing’s exclusionary narrative.

What is populist political communication?

Populism is a highly contested political concept. In the European context it has been usually associated with the rise of radical right parties such as Le Pen’s Front National in France and the Flemish Block in Belgium. In Latin America, populism is associated with the development of left-wing political movements, led by charismatic politicians such as Venezuela’s Hugo Chavez, who employ a Manichean discourse of “us/them”, “people/elite”, positioning themselves as “outsiders” who reject traditional political structures.

Two Belgian scholars, Jan Jagers and Stefaan Walgrave, have proposed a useful typology for the analysis of populism. They suggest that identifying with the people in language and style is the first necessary condition that determines whether a political actor is populist or not. They argue that appeals to the people constitute the “thin ideology” of populism and act as a “preselector” for determining whether “thick populism” exists.

Thick populism, according to Jagers and Walgrave, has one or both of two further characteristics. First, it has a clear anti-elitist narrative. Second, it defines the people as the “in-group” and another group (immigrants, ethnic minorities, religious communities) as an “out-group” which should be excluded from the polity and against which the people are defined.

The narrative of the “Other” in Podemos

Podemos was created, in the words of its founding manifesto, with the aim of “converting citizen indignation into social change”. During their 2014 European Parliamentary campaign that won them five seats and almost 8% of the Spanish vote, Podemos underlined in images and language the “Others” as identified with the political establishment or “la casta” (the caste) and “Us”, identified as the people. The main Podemos electoral video for the 2014 European Parliamentary elections, for example, is deeply personal, contrasting the life stories of the candidates for the two mainstream parties with that of Podemos’ leader, Pablo Iglesias.

Iglesias tells his own story as one of a life of struggle and effort, engaged in the world of ordinary people in which he works hard to achieve what he has. This is compared to the privileged lives of his two main rivals who are depicted as being installed in power, provided with official cars and expensive meals, part of Spain’s ruling class. Leading members of the two mainstream parties are shown enjoying the good life with well-paid positions on company boards, complacent and willing to sell out the country and its people to Angela Merkel.

Iglesias, however, is represented as a normal citizen like you and me, taking a bus, doing his own washing, filling out a tax return. The outgroup is the corrupt and elite political mainstream contrasted with the ordinary, decent Iglesias who is shown as one of us who encourages us to believe that together we can change society.

Podemos’ election rallies hammer home the themes of the campaign video: “our lives or their privileges”, “the old caste”, “traitors”, “rabble”, “thieves”, “rogues”, “shameless”. Iglesias states, “All of them have only one country, money, and they should be judged as enemies by the rest of the people” and “They’re not affected by cutbacks. They have scandalous salaries, private education for their children, private health; they don’t know what it is not to get to the end of the month because the wage is not enough; they don’t know what unemployment is.”

Podemos’ narrative focuses relentlessly on the need to eradicate the corrupt system run by “Them” so as to create a new fairer real democracy run by “Us”. In the words of Iglesias, “Whoever is for fiscal reform, the banning of revolving doors, for an audit of the debt so that the waste of the banks is paid for by the bankers, whoever agrees in telling Mrs Merkel that we don’t want to be a colony is with us.” The possibility of a new honest politics is emphasised and shown in actions as exemplified by the announcement at Podemos’ 2014 campaign launch that, if elected, they will not accept the full European deputy’s salary:

“Let’s show that there can be other kinds of politicians. While the Euro MPs are putting 8.000 euros in their pockets every month, we have committed to receiving 1.900 euros which is three times the Spanish minimum wage.”

Podemos champions the rights of immigrants, pledging to overturn the “Directive of shame” (Spain’s return policy) and end the deportation of immigrants. Mainstream parties are accused of acting like Europe in maintaining repressive laws against immigrants and of considering foreigners to be second-class citizens and often not even citizens. Traditional parties are said to blame immigrants for all society’s problems while Podemos aims to give a voice to immigrants.

In sum, Podemos uses a communication frame that appeals to and identifies with the people and pretends to speak in their name. It adopts an anti-elite rhetoric. Political, state, media and economic elites are blamed for society’s ills. They are considered to be all the same in their pursuit of private gain against public good. Here too we see in play the French theorist, René Girard’s scapegoating dynamic: at times of social and economic crisis, certain groups or individuals are blamed and stigmatized, thus discharging public outrage and restoring an uneasy peace.

Scapegoating is also at the heart of the third constitutive, horizontal dimension of populism which is the desire to exclude certain population categories such as immigrants from the pure group of the “people”. This last dimension is not present in Podemos’ political communication. Podemos positions immigrants as victims of the elites, as part of the people exploited by the ruling class and as those who the elites wish to treat as second-class citizens, regard as scapegoats and exclude from the people.

In conclusion, Spanish left-wing populism does not exhibit the straightforward exclusionary politics of the right, but there is a kind of reverse exclusionary dynamic at work: the elites are accused of attempting to exclude others such as immigrants and of seeking to hijack democracy itself for their own ends. This suggests that the notion of “exclusion” is always present in populist communication of whatever political stripe. Scapegoating too could also be considered to be a constitutive element of thick populism.

Spain may differ from other parts of Europe in that it has not seen the development of radical right-wing populism, but its own brand of populism may have more in common with its neighbours than appears at first glance. Identity politics is replaced by anti-elite politics which espouses elements of a narrative that scapegoats undesirable groups; the theme of exclusion is turned on its head to make the people (and associated groups) the victims of exclusion by the outgroup that includes mainstream political parties, non-state educational and health institutions, Northern Europeans and Angela Merkel. In this way, the exclusive elite becomes the “Other”, responsible for all the country’s problems.