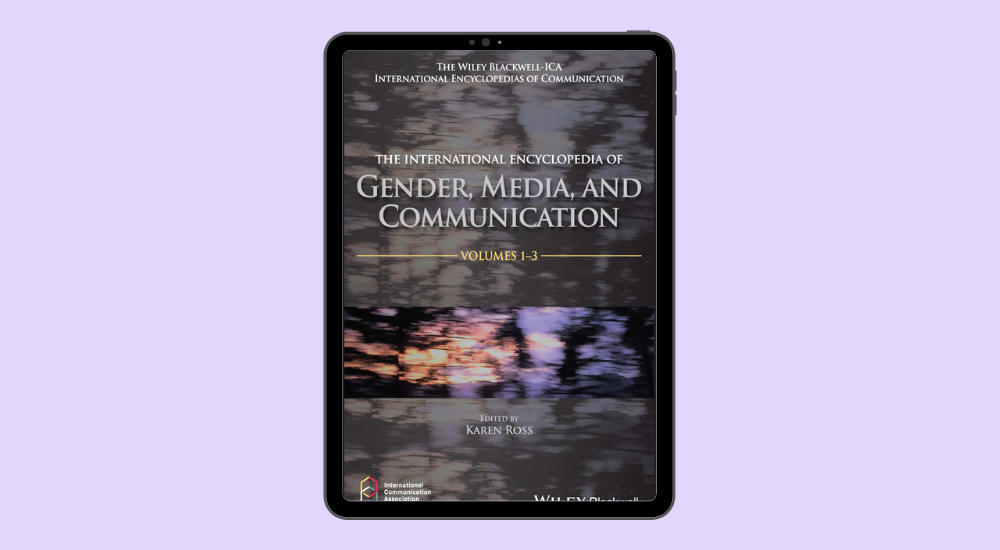 WACC’s Global Media Monitoring Project (GMMP) is featured in the newly-published International Encyclopedia of Gender, Media and Communication (IEGMC), a major reference book that explores various aspects and impacts of how gender is represented in the world’s media.

The IEGMC discusses “the many and myriad ways in which gender matters in our heavily mediated and mediatized lives,” say the editors in their introduction.

Published on Wiley Online Library, the IEGMC has 260 entries on topics such as TV, film and radio histories and genres, gender representation in the news, screen-based entertainment media, identity, intersectionality, and social media.

Contributors include more than 300 established and emerging scholars from 40 countries across all continents, including Dr. Sarah Macharia, WACC’s program manager for Gender and Communication.

In her contribution, Macharia documents GMMP’s role in bringing “news media accountability into the struggle for gender equality and women’s human rights.” She notes how the GMMP, which began in 1995, was “born out of concern about the lack of respect for the integrity and dignity of women in the mass media.”

GMMP’s statistical findings from the last five researches have consistently shown that “women’s severe underrepresentation has persisted as has their relative invisibility in the news in contrast to men,” writes Macharia. “The monitoring research has equally shown a dearth of women’s voices in contrast to men’s perspectives in news journalism, resulting in content that presents a male‐centered view of the world.”

But she also notes that “some transformations have resulted from the critical awareness and evidence emerging from the GMMP.”  (The next GMMP is scheduled this year, and more than 100 countries have signed up to participate.)

Publication of the encyclopedia “is a first step to exposing the issues and analyses, the second is to make the full texts of this formidable publication accessible to non-paying readers,” adds Macharia.

IEGMC editors underscore the timeliness of the encyclopedia, noting how gender studies are “under attack as both an intellectually relevant domain and as a research focus.” They cite several examples, including a decision made in 2018 by Hungary Prime Minister Viktor Orban to revoke accreditation and funding for degrees in gender studies, “was on the grounds that to study gender was to study an ideology rather than a science.”

Publication of the encyclopedia has also been a long time coming, according to the editors. So much has happened in the last 40 years since the publication of Hearth and home: Images of women in the mass media, edited by Gaye Tuchman, Arlene Kaplan Daniels, and James Benet (1978), which most scholars view as “being more or less the starting point in its focus on women and mass communication,” they explain. “Research foci have expanded beyond an early preoccupation with representation (content) and consumption (audience), to interests in employment (production) and ownership (political economy).”

Significant changes in culture and technologies have also raised new issues, they add.

The encyclopedia also treats issues of sex and gender “as integral to the study of society, not a niche interest for the few,” they add. “Its very title includes terms that are in flux and pinned down in this publication merely for a moment in her/story.”

Dr. Karen Ross, who researches, teaches and writes about media, gender and politics, served as editor-in-chief of the encyclopedia. Ross is also GMMP regional coordinator for Europe.