On the screen (MD2019/3)
17822
post-template-default,single,single-post,postid-17822,single-format-standard,theme-bridge,bridge-core-3.0.1,woocommerce-no-js,qodef-qi--no-touch,qi-addons-for-elementor-1.5.6,qode-page-transition-enabled,ajax_fade,page_not_loaded,,qode-title-hidden,columns-4,qode-child-theme-ver-1.0.0,qode-theme-ver-29.2,qode-theme-bridge,qode_header_in_grid,qode-wpml-enabled,wpb-js-composer js-comp-ver-6.10.0,vc_responsive,elementor-default,elementor-kit-41156 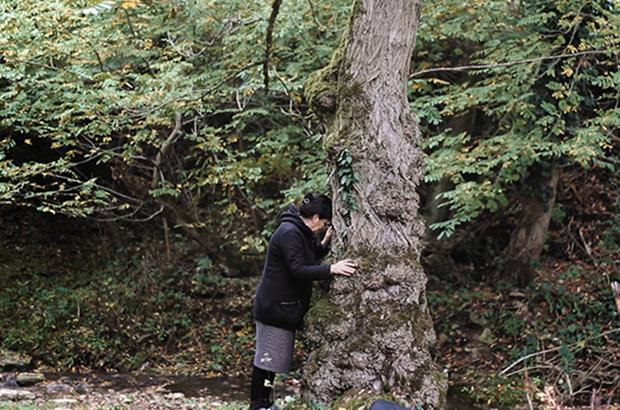 Of his film When Persimmons Grew (still above), director Hilal Baydarov says: “When the primroses were turning red, and the white cherries were in bloom” — that is when my grandmother says the war ended. She talks about time the way people did in olden days, before the calendar divided it up into days, months, and years. When time had no name and was not measured in numbers, it was marked by the rhythms of nature. My father was born “when the rivers overflowed and the grass was harvested,” says my grandmother, meaning my father was born in June. Exact dates mattered less than durations which nature filled with meaning. Time was not a line. It ebbed and flowed with the seasons, was shaped by the lifecycles of the flora and fauna. The title of my film, When Persimmons Grew, pays homage to this traditional way of denoting time. People were coming and going from my family back then. We gathered together, and we broke apart. We grew up, and set about living our own lives. Everything was changing and becoming more colorfull, for all except my mother, whom time left alone. I left home then and returned eight years later — when persimmons grew. Photo: Contributed

Since 2005, an Interreligious Jury appointed by SIGNIS (World Association for Catholic Communication) and INTERFILM (International Inter-Church Film Organisation) has taken part in the Festival Visions du Réel in Nyon (Switzerland). The jury includes a representative of a member of INTERFILM and SIGNIS and a member of Jewish and Muslim faith.

The jury awards a prize, and possibly a commendation, to a feature-length film of the international competition that sheds light on existential, social or spiritual questions as well as human values. The prize of CHF 5’000 is donated by both the Swiss Catholic Church and Médias-pro, the Media Department of Reformed Churches in the French-speaking part Switzerland (CER), and the Swiss Federation of Jewish Communities.

The Interreligious Jury awarded its Prize endowed with CHF 5000 to the film When Persimmons Grew directed by Hilal Baydarov (Azerbaidjan, Austria, 2019). A cinematic soulscape – in poetic and still-life images we get to know a mother who has the ability to remember what really counts. During the persimmon harvest she philosophises with her son about the fruits of life. With a penetrating eye, the Azerbaijani director succeeds in interweaving linear time with the moment, capturing for eternity the joys of everyday life.

The jury gave a Commendation to the film Norie directed by Yuki Kawamura (Luxembourg, Japon, 2019). The filmmaker accompanies his father on a journey to the core of the pain caused by the death of his young wife Norie, allowing the viewers to participate in a deeply human process of mourning.

The Ecumenical Jury at the International Short Film Festival Oberhausen 2019 awarded its Prize of €1500 donated by the Catholic Church in Germany and the Protestant Church in Oberhausen, to the film NoirBLUE – Deslocamentos de uma dança (NoirBLUE – Displacements of a Dance) directed by Ana Pi (France, Brazil, 2018).

In addition, the jury awarded a Commendation to amelina directed by Rubén Guzmán (Argentina, 2018).

Furthermore, the Ecumenical Jury made a recommendation to the German church film distribution companies Katholisches Filmwerk (kfw) and Matthias-Film to buy the non-commercial distribution rights of a film from the Competition for Children and Youth Films called La gita (The School Trip) directed by Salvatore Allocca (Italy, 2018).