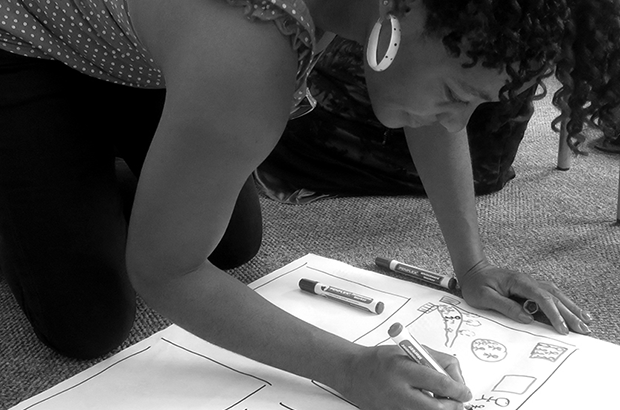 In March 2015, in a shipping container that serves as part of a health care compound in the township of Gugulethu in South Africa,1 nine people are making movies with mobile phones in participatory video (PV) workshop. The two researchers/PV practitioners and seven community mobilisers involved are not only making films, but exploring a methodology for story-driven PV that can harness the transformative power of personal stories into the collective group storytelling process. This article shares their journey from a facilitator’s perspective.

In Change is Possible, one of two films created in the PV workshop, Thulani asks himself: “I want to change. But, will I still be a man?” The scene is a key moment in the film as he decides if he will ignore social pressures and be a more supportive and positive parent; a choice that can be difficult when living in a context of gender inequality and violence.

In storytelling, the “key moment” is a critical shift or momentous juncture that propels a story into a new course of action. For example, Thulani’s answer “yes” to the question “Will I still be a man?” leads him to join a peer support group for positive parenting and strengthen his relationship with his wife.

The key moment in this film also serves a more valuable and strategic purpose than an element of good storytelling. As part of a wider participatory video process, it aims to invite viewers into a conversation as they emotionally relate to the character’s internal struggle. This film raises the complex and often difficult-to-discuss issues of gender violence and inequality; identity and fatherhood; stigma and fear.

The resulting dialogue is critical for the Sonke Gender Justice2 community mobilisers as they will use the PV process in their work on health, refugee rights, domestic and sexual violence, and gendered inequalities in the city’s informal settlement and township contexts. 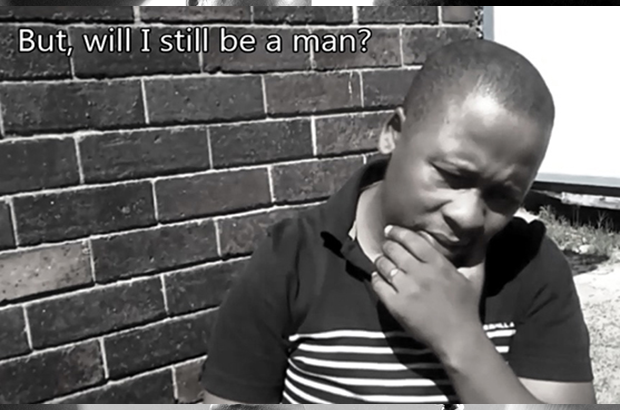 As the researchers/PV practitioners3 facilitating the Gugulethu workshop, we defined participatory video as a collective storytelling process that uses filmmaking as a means to positive and transformative social change. We had observed that PV processes are often designed and facilitated through a journalistic approach to storytelling. This is where community members interrogate, document and share their problems and solutions on a particular concern.

This approach to PV, however, caused us to pause. While we knew a documentary-style of filmmaking could amplify community voice to better address local concerns, we also recognised that the process itself can sometimes miss the emotional dimensions of storytelling experienced through methodologies that focus on individual self-reflection.

Through processes like Digital Story telling,4 we had seen the significance of personal storytelling.5 Firstly, there is a transformative potential for the storyteller as s/he emotionally connects to the topic. This can be therapeutic and particularly valuable for people dealing with painful issues of violence, inequality, stigma and fear. Secondly, personal stories have the potential to connect emotionally with the listener as s/he empathically relates to the teller’s experiences.

This can prompt a deeply meaningful dialogue with others that might otherwise have been silent. To enable such a response, it begs a question: How can the participatory video process better incorporate the personal into its collective storytelling approach? We partnered with the Sonke Gender Justice community mobilisers in Cape Town to explore this question. 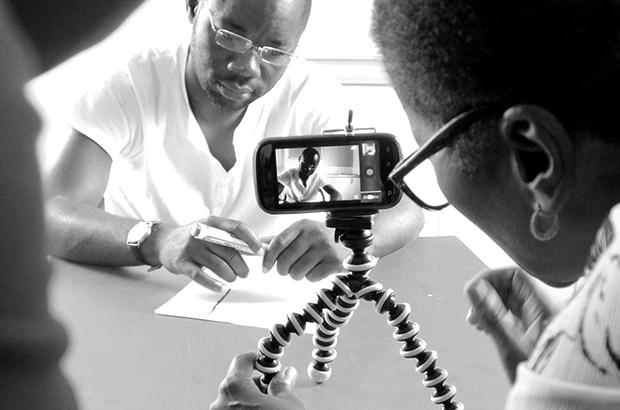 To begin the participatory video process, we held two visioning sessions with Sonke staff to determine how they wanted to use PV for community mobilisation. By starting from a place of listening, we hoped the resulting PV methodology from the workshop could fit their cultural and institutional context and be more sustainable long-term. It was during these sessions that the group decided to use mobile technologies for PV, and use drama as the storytelling style to best incorporate the personal. Drama could allow groups to explore complex and difficult issues in safe ways.

In addition to making their own films, we would be training the community mobilisers as participatory video practitioners. We knew this would be extremely challenging in a short-term workshop as participants often fluctuate between being overwhelmed by the technical aspect of filmmaking and elated by the creation of their own films. In such an environment, the intentionality of each activity in the facilitated PV process can easily be missed.

To help make this clearer for the participants as future PV practitioners, we selected four critical areas as foundational cornerstones for our story-driven PV approach using mobile technologies: group development and relationship building; personal and collective storytelling; appropriate technology; and dialogue and listening. (See the facilitation guide at www.transformativestory.org/story-driven-pv). What follows are our reflections about how each area aimed to connect with the more personal side of storytelling.

Group development and relationship building focuses on activities that create and strengthen group identity, build individual confidence, and engage the group in wider mobilisation efforts. When designing the PV methodology, we knew that most PV learning activities enhance development and group cohesion – from collaborative script development to technical filmmaking. However, we also needed specific processes that would allow people to feel safe while sharing their personal experiences in a group. Drawing from Digital Storytelling, we incorporated facilitated story circles where each person could share their own stories for feedback and discussion in an informal, supportive setting.

As an example in practice, to determine the themes for the collective films, we introduced a prompt question that would help participants tell personal stories. In this case, we asked each person to share a story explaining their connection to the One Man Can wellness clinic, a Sonke Gender Justice and City of Cape Town clinic that provides information, education, advice and clinical services to men who may otherwise not seek support regarding health issues.

In a story circle, each person shared while the others actively listened. In the ensuing discussion, they identified themes they heard in the individual stories, and decided together the top two that would guide their films. They split into groups to make the films Change is Possible and Journey of Hope, a film on sexually transmitted infections. The process itself allowed individual voice and personal experience to play a strong role in what films would be made through the collective process.

Personal and collective storytelling focuses on activities that harness the transformative power of creativity and storytelling. In the PV process, we hoped that individual storytelling would also help participants personally connect to the dramatic underpinnings of their films. We saw this occur during a story circle session on the film Journey of Hope. To begin the session, we asked each person to link their personal emotions to the collective story the group had started developing earlier in the day.

Suleiman shared his story: “When I go into the clinic with my wife and children for their care, I sometimes feel uncomfortable and out of place because there are so few men there. This doesn’t make sense because I work in the area of health. If I am uncomfortable just being at a clinic with my family, imagine how much harder it must be for the men we work with to go in on their own and talk about STIs.”

As part of collective storytelling, Suleiman’s personal experience helped the group connect more deeply to the importance of addressing fears and stigma in their film; which had been absent in its first draft. The original story showed a Sonke staff member delivering condoms and a brochure on sexually transmitted infections to a man’s house who asks for more information.

After sharing their personal stories and responsive feelings, the group decided to dramatise the immediate fears a man faces after discovering he has an STI. Once the group shifted to the emotional storyline, they could more easily see the possibilities of sparking conversations about barriers men must overcome in seeking information on and treatment for STIs. The film, they said, now more meaningfully shared the fears and stigma the community members they work with are experiencing in their everyday lives.

Appropriate technology prioritises incorporating the most accessible, affordable and fitting technology for the context into the PV process. As facilitators, we were initially reluctant to use mobile filmmaking for the PV process due to quality issues and its individualistic nature. Yet, given the proliferation of mobile technologies in South Africa, we agreed to explore its possibilities together. One challenge we faced early in the workshop was keeping a focus on participatory video as a facilitated process for social change, rather than a technical lesson in mobile filmmaking.

However, as the participants actively engaged in group and story development processes, PV’s transformative intention became clearer. As an example, Sonke staff members initially hoped to edit their films on their phones. However, after discussing potential impacts on group development (such as more technically savvy people dominating the process on the small screen), the participants agreed that computer editing would better serve the collective, relational aspects of the methodology.

Dialogue and listening supports activities that ensure the films can both create opportunities for active listening and spark the dialogue the participants want to have. Knowing that dialogue and listening are key factors for social and political change processes, we worked to prioritise them throughout the entire PV activity. To illustrate, we used visuals to prompt strategic discussions on the foundational elements of the participants’ films: who should listen, what they wanted them to see, what they hoped they would think and feel, and what dialogue they aimed to create.

In the case of Change is Possible, the group focused on a story of change, where positive care giving and partner equality were relational decisions for Thulani, the film’s main character. The group also wanted the story to connect emotionally with feelings of hope, responsibility, respect and cooperation. These elements came out in the ending narration of the film:

Nomazizi: “I’m your wife. I’m here to support you. I want this change.”

Thulani: “So we both believe that change is possible?”

The visual approach clearly captured the key issues, emotions and discussion points the groups wanted their films to catalyse. As such, the foundational elements were also used to plan dialogue through a facilitation guide of questions to ask viewers when showing the films. The aim was for more meaningful and responsive connections to emerge through dialogue and listening within wider processes of transformative social change. 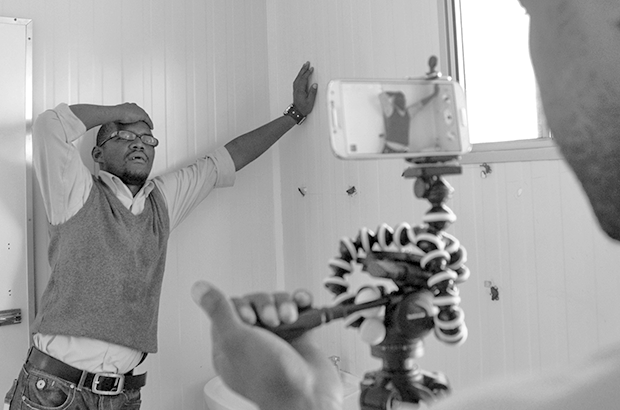 Practitioners who facilitate participatory video activities know that personal stories can be transformative for both the storyteller and the listener. However, linking to a more emotional core in a story is a challenging proposal for collective storytelling practices like PV. The film, Change is Possible, offers inspiration. As the film concludes, Thulani and his wife Nomazizi are affectionately holding hands. The image shows the support and connection they now feel for each other within Thulani’s journey towards change. The image poignantly represents the potential for the personal to elicit a more empathic, relational response to dramatic storytelling.

However, reaching this emotional resolution in a participatory video process – both in the story’s telling and its reception – takes considered facilitation. One possibility is a story-driven approach to participatory video that focuses on group development and relationship building; personal and collective storytelling; appropriate technology; and dialogue and listening.

With these four cornerstones, we suggest, dramatic storytelling with participatory video has the potential to better see, hear, think, feel, listen, connect and transform.

1. One Man Can Men’s Wellness Centre, 15km from Cape Town

3. Workshop co-designed and facilitated by Tamara Plush, a PhD candidate at the Centre for Communication and Social Change, University of Queensland; and Thea Shahrokh, a Research Officer with the Institute of Development Studies (who also peer reviewed this article). Joanna Wheeler, through the Sustainable Livelihoods Foundation, played an important role as an advisor.