Post-Production for the Film ‘Six Floors to Hell’
20496
post-template-default,single,single-post,postid-20496,single-format-standard,theme-bridge,bridge-core-3.0.1,woocommerce-no-js,qodef-qi--no-touch,qi-addons-for-elementor-1.5.3,qode-page-transition-enabled,ajax_fade,page_not_loaded,,qode-title-hidden,columns-4,qode-child-theme-ver-1.0.0,qode-theme-ver-28.6,qode-theme-bridge,qode_header_in_grid,qode-wpml-enabled,wpb-js-composer js-comp-ver-6.9.0,vc_responsive,elementor-default,elementor-kit-41156

Posted at 12:20h in Uncategorized by wacc_kn 0 Comments 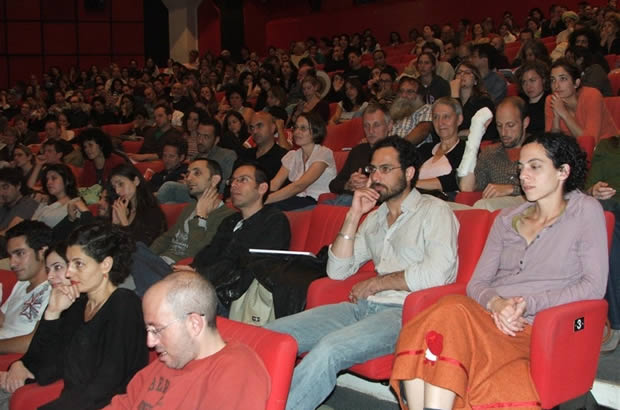 Despite many difficulties (technical and safety/security), Video48 finished the documentary: 3 versions were produced: a longer version (120 minutes); a shorter and final version of 68 minutes was produced for the Film Festivals and another version (52 minutes) was edited just for TV.
Film chosen to be part of the 12 films for Doc Aviv, Israel’s most important film festival. The film was screening twice during the festival which is a rare occurrence. There were also 2 screenings in the Jerusalem’s cinematheque.
English & Hebrew subtitles added to reach more viewers. Sound was added but no music.
SFTH was awarded the best Editing Prize.
Film well covered in local and international news media.
Following an article put on the WACC website, there have been many requests from USA, Canada& Latin America to purchase the DVD.
Six Floors to Hell, has won the editing prize at the Docaviv festival and the Rai3 prize (Italy) at PRIX CMCA.

From 2008 ICCO Report:
Six Floors to Hell – Post Production, Video 48, Israel. Produced by Video 48, a Jerusalem-based partner of WACC committed to bridging the gap between Arabs and Jews in Israel and to fight for the recognition of Arab-Israeli rights. The documentary addresses ‘the invisibility’ of Palestinian workers who “illegally” bypass the military checkpoints and separation wall from the Occupied Territories into Israel trying to find work in order to provide for their families. The location is Geha Junction, a busy Tel Aviv neighbourhood where hundreds of Palestinians live in a derelict underground multi-storey car park, part of an abandoned, unfinished shopping mall. They slip into Israel to find work, and most of nights of the week they stay here, in subhuman conditions, six floors below ground in the darkness amid dripping water, rubble and filth. The film was chosen to be part of the 12 films for Doc Aviv, Israel’s most important film festival. English & Hebrew subtitles were added to reach more viewers. It won the best Editing Prize and was well covered in local and international news media. Following an article put on the WACC website, there have been many requests from USA, Canada & Latin America to purchase the DVD. It has also been shown in several European countries.