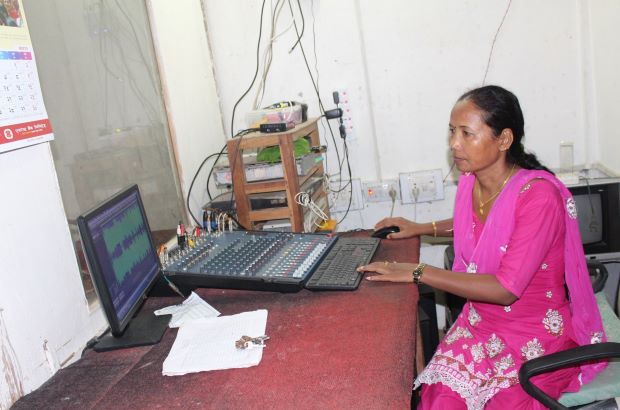 Tharu-speaking Indigenous journalists in Nepal have enhanced their news and reporting skills, and production of news in Tharu has increased, thanks to a capacity building project undertaken by WACC local partner Prachin Srijansil Aadibashi Samaj.

Gurbaba FM was established in 2008 to serve Tharu-speaking Indigenous communities in Nepal’s district of Bardiya. There are about 1.7 million Tharu people in Nepal, or 6.6% of the population, according to a 2011 census.

Most of these communities lack access to media in their language. “Tharu communities face different forms of exclusion in the economic, political, and educational realm, primarily because of linguistic barriers, making media content on key development issues vital for these communities,” said Lorenzo Vargas, WACC manager for Communication for Social Change.

Gurbaba FM is “relatively large by Nepal standards,” said Vargas, noting that it has 14 employees and a 500-watt transmitter capable of reaching 120,000 people.

However, the radio station lacked qualified community reporters and journalists who are able to dig deeper into issues affecting the community, said Vargas.

The specialized training for 16 journalists, half of them women, also focused on increasing their knowledge of Indigenous rights. It has also led to an increase in Tharu women journalists, and the participation of women in radio programs, said a project report.

The project has helped Radio Gurbaba to report on stories coming from distant villages. This has resulted in an increase in news items – up to 10 stories daily, from the previous three to four, said the project report. At least 220 local leaders were interviewed as part of the new content produced, it added.

The increase in news production has also led to a rise in audience size, said the report. It noted that six other FM stations have been broadcasting Tharu language news produced by Gurbaba FM.

Gurbaba FM has also been uploading its news on its website daily, and about 25,000 people have viewed the 300 news items it has so far uploaded, it added.

“This initiative has greatly enhanced the sustainability of the radio station in the long term,” said Vargas. —by Marites Sison

Photo above: Tharu communities face various forms of exclusion because of language barriers. The project addressed this by providing basic radio journalism training to local journalists and increasing their knowledge of Indigenous rights. By Cultural Survival