Posted at 12:09h in Features by Stephen G. Brown 0 Comments 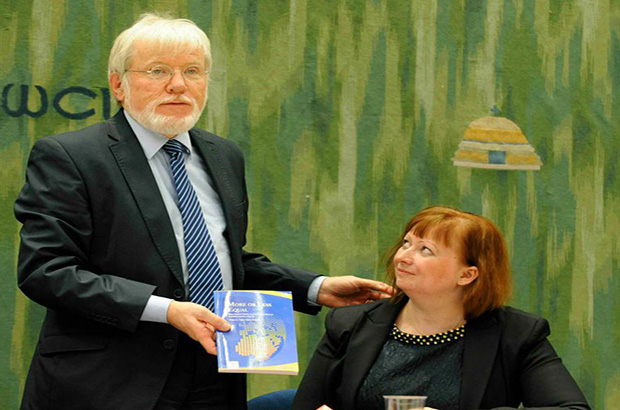 Communication must be lifted up as a fundamental human right and communicators called to practise an ethics of freedom and accountability, Marianne Ejdersten, vice-chair of the Europe region of the World Association for Christian Communication, told an event in Geneva on International Human Rights Day on 10 December.

“Freedom of expression must be respected and community groups assured access to technology and to media platform,” Ejdersten stressed in her presentation at a panel discussion on “Access to Information as a Human Right”, organised to mark the 10th anniversary of WACC partner Globethics.net, a global network promoting dialogue on ethics.

At the event, Globethics.net and WACC launched a new publication, “More or Less Equal: How Digital Platforms Can Help Advance Communication Rights”, a critical look at how the internet and citizen journalism has radically altered traditional news and information flows, and available for free download.

WACC’s key concerns include media diversity, equal and affordable access to communication and media and gender justice, said Ejdersten, who has also been named by the World Council of Churches as its new director for communication.

Broadcasters had to work much harder for a just world, one that included more gender-based productions, she said. “But we can do that together. We can try to connect different organisations and companies to strengthen the role of women and men in this.”

Speakers at the panel, moderated by Globethics.net programme director Dr Stephen Brown, agreed that access to information is an inalienable human right that should be promoted but needs to be respected, nurtured and used appropriately if it is to be used for the greatest benefit.

Director General of the European Broadcasting Union, Ingrid, described eroded editorial independence, control of media by groups wishing to overthrow governments, and the spread of information that is not impartial as weapons that could be turned against the people.

The EBU defends the notion of information as a human right, she said. “This is continuous and never stops. We have to defend those rights every day. But it will only happen if a society wants this and supports this. It’s all vital for developing a civilised society but it needs to be treated with great care and defended every day.”

While internet was today the strongest force for democracy, said Deltenre, a democratic and pluralist society cannot depend on blogs and social media alone, since not everything found on the internet is true.

Media are needed that serve the public by verifying information and adding context, she said. In 2012, the EBU created a set of values of universality, diversity, independence and accountability that were unanimously adopted by its members.

Preetam Maloor, a strategy and policy advisor at the International Telecommunications Union, said Information and Communication Technologies were not only channels for communication but opened the door to an enormous, variable and easily accessible source of information and opportunities for all.

However, although the number of Internet users kept growing, with two thirds from the developing world, the internet was still far from ubiquitous. More than 4.4 billion people were offline and even those online did not always have access to the same opportunities. In many places, broadband was too expensive, and social media, apps and e-commerce platforms were not available. Services were not offered in the local language, he said.

Kenneth Mtata, study secretary for Lutheran Theology and Practice at the Lutheran World Federation drew parallels with his son, who is about to turn 10 and is already overwhelmed by the information confronting him. “The extreme production of information results in him developing patterns of consumption. Certain things on TV and the internet interest him and he has a growing appetite for celebrity and gossip.” As a parent, he finds himself facing ethical dilemmas. Should the family turn the television off when an image of a naked man lying on a bed suffering from Ebola is shown or let their son experience the reality of the world?

Based on a news release by Globethics.net